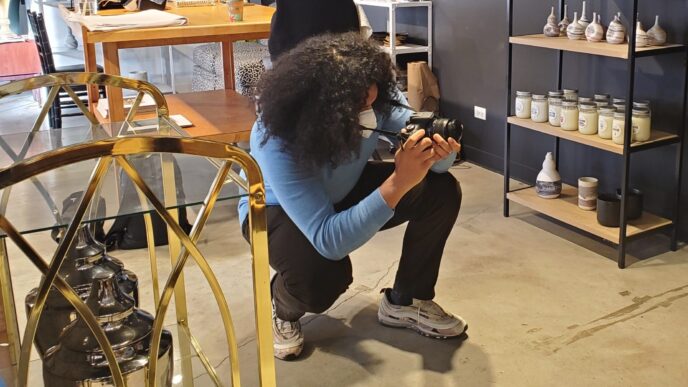 Chicago has been experiencing a media resurgence. Thirty outlets have launched in the last 20 years—many smaller newsrooms focusing on hyperlocal news. Some outlets, including legacy media, are becoming nonprofits as advertising revenue declines.

There has also been growth in content that speaks to the lived experiences of people of color and their communities. With mainstream media often ignoring the South and West sides or focusing only on crime, readers are turning to outlets that better represent their interests and concerns.

To support this ecosystem, the Trust launched Media Makers in 2020 to fund hyperlocal outlets working alongside disinvested communities to create content reflecting their needs, priorities, and voices. Media Makers is part of the Trust’s Building Collective Power strategy, representing the “voice” strand.

For three Media Makers grant recipients – Block Club Chicago, the Chicago Sun-Times, and La Raza – their approach to news is unique and based on the needs of the communities they serve.

Launched in 2018 after the closure of DNAinfo and the Chicagoist, Block Club Chicago is a nonprofit news outlet that focuses on news at the neighborhood level. Grant support from Media Makers has allowed Block Club to strengthen resident-informed news coverage on the city’s South and West sides and promote new media partnerships with hyperlocal, community-led newsrooms.

Roughly half of the 60+ neighborhood areas Block Club serves are majority Black and Latinx neighborhoods, so meeting their news needs is a priority. This can range from reports on racial inequities in traffic stops to human-interest stories like gardener Edgar Florentino, who plants flowers in areas plagued by violence in Back of the Yards as a way to reclaim the neighborhood. Since being covered in Block Club, other outlets have written about him, and his GoFundMe saw an influx of donations.

One important aspect of how Block Club covers news is a model that entails having reporters live in the communities they cover. According to Maple Lloyd Walker, director of development and community engagement, this is vital to building trust. (Learn more in this video.)

“Our reporters don’t parachute in once or twice to tell a story. They are in these neighborhoods every single day,” she said. “They’re working out of coffee shops or libraries, making themselves accessible so that they are telling the stories that matter the most to our readers.”

For over 178 years, the Chicago Sun-Times has been one of the most familiar names in Chicago media. In January 2022, Chicago Public Media acquired the legacy paper after a lengthy search for ownership. The acquisition, supported by the Trust and other philanthropic partners, ensured the paper could continue serving as a key player in Chicago’s media landscape. It also allowed for the Sun-Times and its new sister newsroom, WBEZ, to collaborate on stories and share each other’s content on their respective platforms.

This cross-platform sharing has been especially important for investigative reports like Drowning in Debt, which uncovered how rising water costs caused many homeowners to go into debt, particularly in Black neighborhoods. The story originated with WBEZ, but also ran on the Sun-Times front page and its website to ensure it was getting in front of as many readers as possible, especially those impacted by the issue.

As part of the acquisition, the newspaper shifted to a nonprofit news model, which Sun-Times CEO Nykia Wright says has allowed it to go deeper into the type of coverage and investigative reports it can do. Wright also notes how funding from Media Makers has helped the pivot to more enterprising journalism, including funding prior to the acquisition that helped the Sun-Times maintain two reporter roles dedicated to covering social justice, environmental, planning, and development issues.

“We are now leaning more towards the goals of Chicago Public Media, which is human-centered, solution-oriented journalism,” she said.

Newspaper La Raza has served Chicago’s Latinx population since 1971. Published weekly, La Raza provides news for a Spanish-speaking audience – many of them immigrants – covering stories from the perspective of how it impacts their everyday lives. Story topics can range from inflation, COVID-19, and gentrification, informing readers of how community leaders are responding to these issues and what resources are available if they are directly impacted. Grant money from Media Makers helped support the outlet’s editorial production and flow of online news and preserve the editor position.

According to Director and General Manager Jesús Del Toro, La Raza is often the primary news source for its immigrant readers, helping them navigate their new surroundings. “We have, for many years, been a tool for integration, empowerment, and becoming part of the fabric of America—or in this case, Chicago,” he said.

During a time of polarization and misinformation, all three recipients agree that Chicago’s media resurgence is happening at a critical juncture. As Chicago Public Media CEO Matt Moog notes, the health of a local media market is connected to the civic health of the communities it serves.

“Chicago is generally recognized as having a very healthy, vibrant, and growing ecosystem, with a number of successful outlets,” Moog said. “We’re all working to inform and improve empathy and connections with communities so we can have a healthy democracy.”

Since launching Media Makers, the Trust has been looking into how it can increase its support for hyperlocal outlets. According to Woods, there are now more community-centered newsrooms than legacy newspapers, which requires the philanthropic community to step up with funding.

“There is a responsibility for us as foundations to respond to this growing media ecosystem with equal measure and equal enthusiasm,” she said. “It’s this exact ecosystem that allowed Chicagoans to increase their trust in the news.”