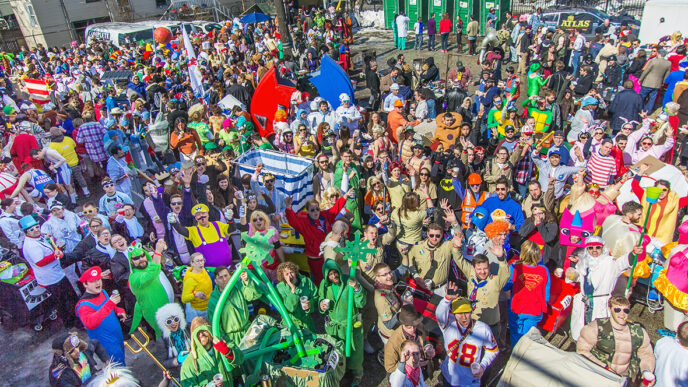 When Devin Breen attended Burning Man in 2005, he experienced “ordinary people creating extraordinary things.” Energized by the personally empowering experience, Breen knew that he had to bring the energy he found in the desert back to his home. “I didn’t know what it was yet,” he says, “but I was going to do it.”

Bolstered by a “sense of possibility that [he] wanted to apply to the real world,” he founded CHIditarod, one of Chicago’s most unique charity food drives.

Breen strives to share his sense of wonder and inspiration with the hundreds of CHIditarod participants and volunteers: “people who really want to be there, who are really into it. Their attitudes determine the energy in their costumes, prizes and performance.”

He borrowed the basic idea from similar programs in San Francisco and New York, but was the first to add the charitable component. “I thought, ‘What if we do that and do good at the same time?’”

Devin Breen waves a flag to signal the start of the Chiditarod shopping-cart dash. In 2015, more than 1,000 racers collected 27,000 pounds of food and $39,000 in donations to the Greater Chicago Food Depository. Image courtesy of Ryan Brandoff.

Since it began in 2006, the food drive and fundraiser has grown ten-fold: from a few dozen people in a wild race to fill their shopping carts with food donations, to over 1,000 racers and volunteers who collected more than 27,000 pounds of food for the Greater Chicago Food Depository and nearly $39,000 in donations in 2015 alone.

That energy and individualism has spread to several other cities. “We have had at least ten groups get in touch for help starting their own race, and there are probably at least twice that many who have done it on their own,” Breen says.

This interest inspired Breen to develop a turn-key CHIditarod starter kit. A software engineer by day, he developed web content and tools designed to be freely shared, using the Github.com platform. “We definitely have an open source mentality when it comes to making resources available,” he says.

Breen has used donations from the last three CHIditarods to make grants for programs “addressing the root problems of hunger.” Through the CHIditarod Foundation, $70,000 in grants have been awarded to programs that provide education, school nutrition, community garden projects and more.