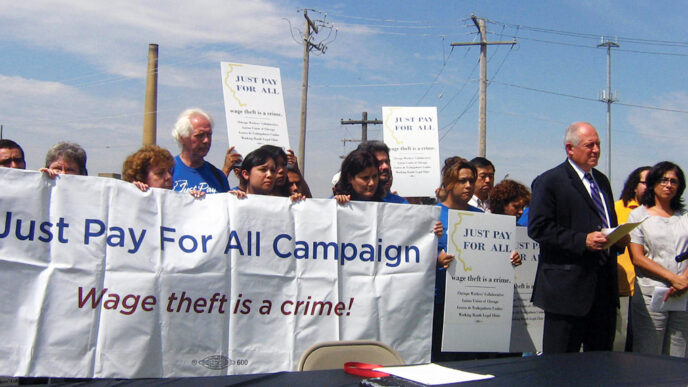 When Liliana Baca clocked out each week from her job at a grocery store, the count would total more than 55 hours. Even though the federal Fair Labor Standards Act requires employees to be paid extra—normally time and a half—if they work more than 40 hours each week, Baca did not see a cent of that pay for five years.

“I’m not the only one who has a story,” Baca told Arise Chicago. “So many people have had their wages stolen.” Officials define wage theft as the unfair withholding of salary, often associated with overtime or minimum wage rules. Offices report that wage theft typically impacts low-wage, low-skilled or non-English speaking employees.

The Economic Policy Institute investigated the countrywide loss due to wage theft, looking at how much money victims who reported injustice ultimately won back. The U.S. Department of Labor provided victims with $280 million, state departments of labor in 44 states reimbursed $172 million and state attorneys general recovered $14 million.

Groups such as Latino Union of Chicago, Chicago Workers Collaborative, Centro de Trabajadores Unidos: Immigrant Workers Project and Working Hands Legal Clinic are teaming up to fight wage theft. These initiatives form the Just Pay for All Coalition, which works to empower employees to ensure they are being fairly compensated for their work.

Supported by a grant through The Chicago Community Trust, the organizations making up the coalition are helping workers recover unpaid wages, hosting classes to teach workers how to prevent being shortchanged and publishing a study on the state of wage theft in Illinois.

The unfair practices the coalition battles includes employers incorrectly labeling employees as contractors, employers offering shorter breaks than the law requires, and employers paying workers below the minimum wage. This research came from a 2008 joint study by the Center for Urban Economic Development, the National Employment Law Project, and the UCLA Institute for Research on Labor and Employment. The study also found that almost 60 percent of those surveyed experienced some form of wage violation, and $7.3 million has been stolen from Cook County workers every week.

The Chicagoland area is on the right track to changing its current situation: This February, the Cook County Board of Commissioners passed an ordinance imposing punishments on companies convicted of wage theft, such as revoking company licenses and barring them from receiving county contracts or property tax incentives for five years.