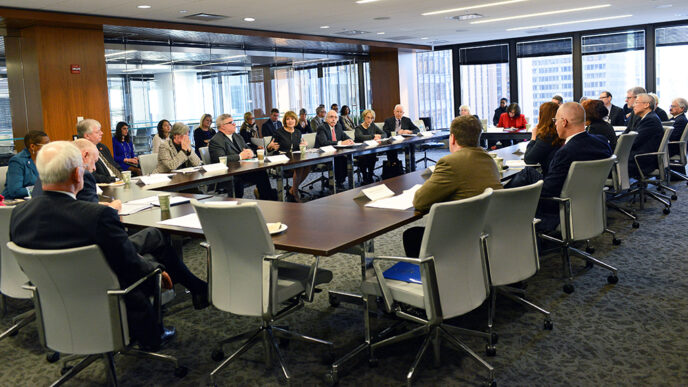 Chicago has long been known as a center of commerce and transportation, and for its world-class public museums and soaring architecture. Now, it’s moving to burnish its status as a leader in higher education through a consortium called America’s Urban Campus (AUC).

The consortium took steps to become a formal entity on January 11, when leaders representing 22 of the region’s colleges and universities signed a memorandum of understanding to establish the AUC.

Terry Mazany, president and CEO of The Chicago Community Trust, called it a “historic moment” as he addressed the leaders at the signing.

Leaders of 22 Chicago-area colleges and universities have established America’s Urban Campus, a consortium to promote their impact on the local economy and the global stage. In addition to attracting students from every U.S. state and more than 100 countries, member colleges generate over $10 billion into the local economy each year.

A research study released in 2014 and funded by the Trust revealed that metropolitan Chicago’s higher education institutions educate 216,000 students, generate $10.8 billion in local economic activity, and support 43,000 jobs. One in four Chicago residents are alumni of these participating colleges and universities.

That concentration of institutions and students constitutes a vibrant urban campus. It also frames the idea of the AUC and its contribution to the economic, social and cultural vitality to the city of Chicago.

Formalizing the relationship among the institutions will allow AUC to “lift off and realize its potential,” Mazany said. “This group can be an engine of innovation for the region.”

AUC members have already proposed projects to realize that vision. The first involves branding “Chicago as a global destination for higher education,” working with such organizations as Choose Chicago and World Business Chicago to get that ball rolling.

Other projects will center on economic development, civic programming, student engagement and infrastructure. One proposed civic program is an AUC Student Day of Service. In time, the consortium expects to collaborate with the Obama Foundation Library and foster deeper connections among students from member institutions.

An executive committee will govern AUC, with co-chairs elected to three-year terms. The Chicago Community Trust, which provided funding for the consortium’s groundwork, will serve an ex officio role supporting AUC.

“The Illinois Institute of Technology was an early participant in the AUC initiative,” said David Baker, IIT’s vice president of external affairs and AUC co-chair. “We understood the importance of engaging our collective institutions in working together to establish Chicago as a top-ranked ‘college town’ while promoting Chicago as a great destination for domestic and international students—and enabling us to work collaboratively on the major issues facing Chicago.”

The consortium will ultimately help member institutions engage students, enhance infrastructure and, in the words of The Chicago Community Trust president Terry Mazany, “be an engine of innovation for the region.”

Kwang-Wu Kim, president and chief executive officer of Columbia College Chicago, said, “America’s Urban Campus will play a vital role in promoting the importance of Chicago’s higher education institutions to the city of Chicago, and we are pleased to be a partner in this important endeavor.

“Columbia College Chicago faculty, students and alumni have a long history of shaping vibrant creative communities and leading creative industry in the city, and we look forward to contributing even more through the programs and initiatives of this new consortium.”