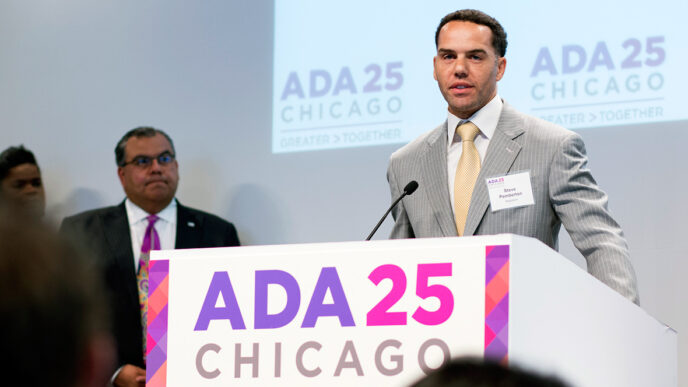 “Growing up in foster care, I always wondered: how had I become disconnected from my parents? Why? Who are they?”

It wasn’t until he was an adult that Steve Pemberton, vice president and global chief diversity officer at Walgreens Boots Alliance, read his foster care case file and found that his mother had been told her kids would be taken until she got—and kept—a job. The long and the short of the story is she never did get that job, and she never saw her kids again.

From that case file, Pemberton learned that his mother was in a losing battle with an undiagnosed depressive condition, which likely precluded her from ever meeting the job expectations of the foster care agency. If her condition had been diagnosed, it would now be considered a disability under the Americans with Disabilities Act (ADA), but at the time—before the ADA became law—she would not have been protected from discrimination.

[pullquote].@iStevePemberton: Leading a movement to see possibilities, not obstacles, in employing people w/disabilities[/pullquote]

Did those circumstances have a direct effect on her inability to hold a job, and ultimately, her inability to care for her children? And were employers partly to blame, for their failure to see her potential beyond these perceived barriers?

Today, Pemberton is dedicated to combating the historical—and still extremely prevalent—challenges of access to employment opportunities for people with disabilities. Signed into law in 1990 and celebrating its 25th anniversary this year, the ADA protects people with any kind of disability, visible or invisible, to ensure equality of inclusion. But there is still more work to be done to fulfill the ADA’s promise of full participation and economic self-sufficiency.

“We need to evolve the narrative and explain to other employers the value of the perspective, loyalty, resilience and diversity that people with disabilities bring to the workforce,” said Pemberton.

It is important, Pemberton says, that employers look past the perceived obstacles involved with employing people with disabilities and concentrate on the possibilities. To help other companies with this shift in focus and breakdown of perceived barriers, Walgreens regularly meets with and gives tours of its facilities and training centers to show other companies first-hand the integration of people with and without disabilities working alongside each other—and just as efficiently, if not more so.

Beyond his work at Walgreens, Steve is also the chairman of the US Business Leadership Network—a national nonprofit that helps business drive performance by leveraging disability inclusion in the workplace, supply chain and marketplace. As part of this year’s anniversary of the ADA, Steve and ADA 25 Chicago are putting energy behind creating a Chicago chapter of the organization, the Chicago Business Leadership Network (CBLN). In having a local, peer network of employers focused on learning from each other about successful ways to sustainably increase inclusion, and implementing strategies to do so, CBLN aims to inspire and empower companies to increase rates of employment for people with disabilities.

Since the signing of the Americans with Disabilities Act 25 years ago, there has been much progress in leveling the playing fields for inclusion and access for people with disabilities. But there are still inequalities and more work to be done, particularly in the areas of employment and education, and Pemberton believes this is where we need to focus moving forward.

ADA 25 Chicago is helping to broaden and deepen the advances made over the past 25 years. As a city, Chicago has an opportunity to be a leading voice in catalyzing improved access and inclusion moving forward—because, to Steve Pemberton, it is important to recognize the generational impacts of these qualities on families, children and loved ones. Had his mother been recognized for her abilities instead of discriminated against for her perceived inabilities, perhaps he would have some memory of her today.

In addition to Pemberton’s role as Vice President and Global Chief Diversity Officer at Walgreens Boots Alliance, which is a national and longstanding leader in employing people with disabilities, he is also a Steering Committee Co-Chair of ADA 25 Chicago; Chair of the US Business Leadership Network, a nonprofit helping business drive performance by leveraging disability inclusion in the workplace, supply chain and marketplace; and a published author.