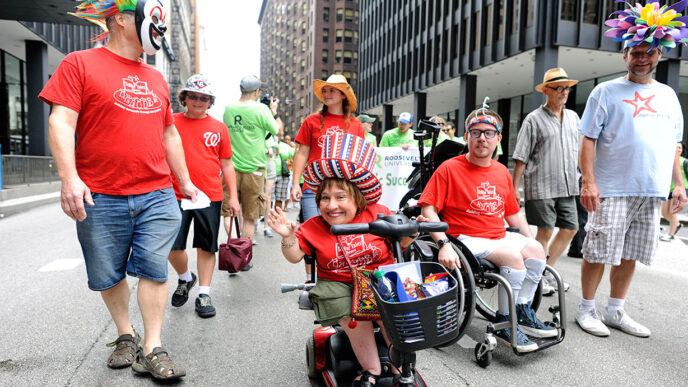 On Saturday, July 18, hundreds of Chicago-area residents filled the Loop for the 12th annual Disability Pride Parade. Chicago’s Disability Pride Parade is the longest running of its kind in the nation. The parade was created in 2004 by volunteers from the disability community for the community as a statement of self-acceptance, dignity and pride. Since its inception, the parade has been a completely volunteer-led endeavor demonstrating the passion and commitment of its organizers.

Following the parade, a rally in Daley Plaza featured booths and giveaways from more than 60 organizations, music and performances from regional artists and a speaking program that included remarks from former Senator Tom Harkin (D-Iowa), who authored the Americans with Disabilities Act 25 years ago and served as this year’s grand marshal.

Scott Nance, a member of the Parade organizing committee, addresses the crowd in Daley Plaza. A longtime advocate and staff member at Access Living, Scott went above and beyond to make the Parade extra special this year traveling down to Ohio to bring the ADA Legacy Bus and its exhibit to Chicago.

Also in attendance were Karen Tamley, commissioner of the Mayor’s Office for People with Disabilities; Terry Mazany, president and CEO of The Chicago Community Trust; and more.

ADA 25 Chicago, an initiative of The Chicago Community Trust, was one of the primary supporters of this year’s parade. The initiative is dedicated to advancing and expanding access and inclusion for people with disabilities across metropolitan Chicago over the course of 2015, which is the 25th anniversary year of the ADA. We attended the celebration and spoke with participants about how they give back to their communities and what inspires them to do so.

Note: Sunday, July 26 marks the official anniversary of the Americans with Disabilities Act—next week we’ll feature stories about people working to make good on the promise of that legislation.

Glenn and Sarah from Grayslake brought their children to the Disability Pride Parade to teach them about the importance of the disability community. The couple is very connected to giving back to others. Glenn, who feels that “everyone has a sense of duty to give back talents, time and efforts to others in need,” volunteers with the Veterans Administration and an equine therapy center among other Chicagoland organizations. Sarah, who was diagnosed with MS in 2001, gives back because “the MS and disability community have given so much to me and I want to repay the favor.”

[pullquote]Celebrate life and philanthropy with the diverse, generous Chicagoans of the 12th annual #disabilityprideparade[/pullquote]

Colleen from Western Springs raises Fiesta, a yellow lab service dog-in-training, so one day he can help individuals with disabilities. “We love dogs, and if these dogs can help other people live full lives, that only makes us happy.”

Daniel, a LaGrange resident, bounced from booth to booth while at the rally following the Disability Pride Parade. Daniel was diagnosed with learning disabilities at a young age, and he shared that his inspiration for giving to others comes from “the special education teachers that have always supported me.”

When we met Wanda (left) and her friend Kim (right), they were clapping to the beat of a passing marching band. Wanda told us she spends her free time “volunteering at a senior home and helping Chicago’s homeless population.”

Excitedly waiting for the parade to begin, Rachael from Park Ridge, with her friend Brandon by her side, shared why she’s inspired to help people with disabilities in her community. “I’m making a difference in their lives, but at the same time they’re also making an amazing difference in my life.”

Liz from Rogers Park identifies as a part of several communities, including the disability and LGBTQ communities. While volunteering her time at the rally, Liz shared how she gives back to others. “While I didn’t have community resources growing up, I now have the privilege of being highly educated and can give back to LGBTQ youth and students with disabilities.”

While educating passersby about the Family Resource Center on Disabilities, Paula from Washington Heights told us she “looks to members of the disability community to promote true and lasting change in society.”

Kevin’s inspiration for being a good person is simple: “My disability community is a constant reminder to give back.”