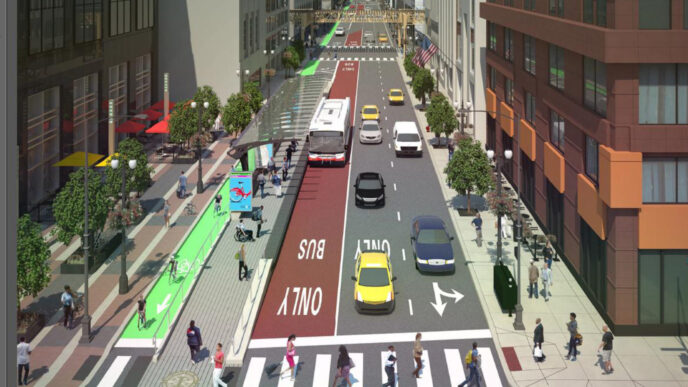 Bus Rapid Transit: Why the Trust Got Involved

A mere four years after The Rockefeller Foundation partnered with Chicago’s transit leaders to bring bus rapid transit (BRT) to the Windy City, the city’s first BRT line—Loop Link—broke ground in March. This timeline is a remarkable achievement for a major infrastructure project.

In 2011, The Rockefeller Foundation asked The Chicago Community Trust to provide local stewardship, oversight and governance on a $1 million grant to incubate BRT in Chicago. As a global institution, Rockefeller understands the value of engaging a community foundation on complex projects that require local coordination between public, private, nonprofit and community partners. During the course of the project, the Trust has acted as convener, collaborator, fiscal agent and funder. As a result, Rockefeller’s $1 million investment in Chicago has leveraged more than $31 million in public funding for Loop Link – and there is more to come.

Finally, the City and BRT partners are developing a plan that could expand BRT to critical corridors throughout Chicago. The system-wide plan will be completed in late 2015.

BRT Chicago demonstrates the Trust’s commitment to sustainable development. The Loop Link and proposed Ashland Avenue BRT will improve transit times, promote land use efficiency and reduce overall traffic congestion. Perhaps most importantly, properly sited BRT connects residents to jobs and services beyond the reach of Chicago’s rail system and in a more efficient manner than conventional bus transit. The Trust is proud to have played an integral role in delivering BRT to a city rich in both transit assets and transportation innovation.