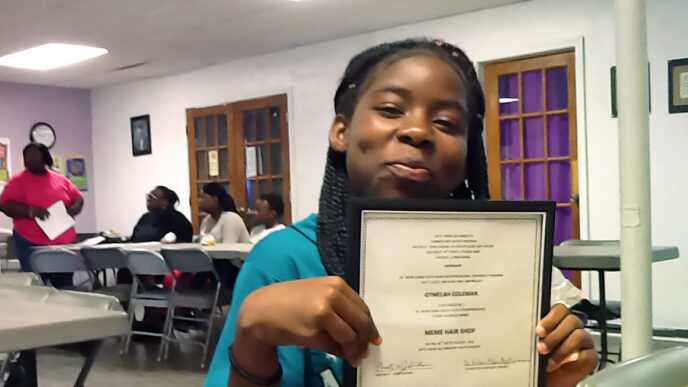 Building Up Chicago’s Next Generation of Black Entrepreneurs

In a small chapel on West 74th Street, across the street from a CTA bus garage, twenty kids and their family members danced and sang along as James Brown blared from the back of the room. The purple-hued chapel of Gifts From God Ministry was celebrating the end of its summer youth program—and in particular, a six-week lesson teaching young participants the value not just of a dollar, but of a black dollar.

“During the 1960s, when James Brown wrote that song, black people were being treated very badly,” Pastor St. John Chisum told the young graduates. “So I want you to say it loud—and to remember it for the rest of your life!”

The program they gathered to celebrate, the Dr. Webb Evans Black Youth Entrepreneurial Experience, was named in honor of an activist and founder of the Chicago-based United Black American Progress Association. Evans, known as “Mr. Buy Black,” had a lifelong mission to motivate African Americans to invest in their own community: to buy from black-owned businesses and to create jobs and build wealth for their families, on their own terms.

Dr. Evans passed away in 2015, at the age of 101. But his legacy inspires this financial education program—one of 64 recipients of a $1,000 Acting Up award from The Chicago Community Trust this year. An outgrowth of the ongoing On the Table initiative, the awards provide capital to power up great grassroots ideas with positive impact in the community.

Through the Acting Up Award funds, 30 participants ranging in age from 6 to 18 went on field trips to black-owned businesses in Englewood: a beauty salon, a hardware store, a black-owned McDonalds. But perhaps most inspiring was a meeting with Jayden Hammond, the 12-year-old owner and founder of J-Rock’s Pop, a gourmet vegan popcorn vendor.

“Usually we’re out buying other people’s products, and the money goes out of the community,” says Donavan Luckett, 14. Jayden’s business offered a practical model for how they could start their own.

Charged with coming up with a plan for his own small business, Luckett developed the concept for a tutoring center, “because I want children to know more and I want to improve their lives.”

“It impacted them a lot,” says Chanary Jordan-Wallace, Nyla and Miyay’s grandmother and a parishioner at Gifts From God. “It showed them that they had to work hard to achieve their goals and not depend on anybody.”

“Usually we’re out buying other people’s products, and the money goes out of the community,” says Donavan Luckett, 14. For his own small business, Luckett developed the concept for a tutoring center, “because I want children to know more and I want to improve their lives.”

At the ceremony, the work of even the littlest kids—full of dreams of cupcake stores and ice cream shops—was celebrated with certificates, commemorative t-shirts and lots of applause. But the big finale entailed actual money.

As part of the program, the kids were challenged to sell rolls of “Easy Fella” toilet paper, made by a black-owned manufacturer in Indiana. For every roll sold, the salesperson earned 37 cents. The top salesperson took home $40.33 for sales of a whopping 109 rolls, plus a $25 bonus, which Chisum presented to winner Demarian Richardson with a flourish.

“This generation is being taught that lesson at a very young age, so to take it with them as they grow is a good thing,” says Deborah Crable, project manager at Teamwork Englewood, who’s working on an entrepreneurial initiative for young adults in partnership with Whole Foods.

When asked what they’d learned, the kids were eager to share.

“We learned how to be responsible with money,” said Brianna Stewart, 10, who wants to open a clothing store.

“We learned how to get a loan, and how to hire and fire someone,” said Donavan Luckett.

“It’s good for us,” added Miyay Jordan, “because we learned that we can save our own money by having a business.” Sister Nyla added, “It keeps us out of the streets, because the streets are not good.”

Because people spend so much time talking about crime and poverty on the South Side, explains Pastor Chisum, he wants to show the world, that the reality is much richer.

“There’s a lot of good in Englewood,” he says.