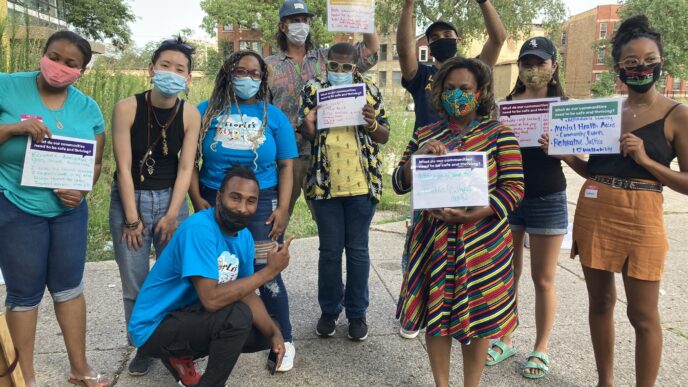 Building the Power to Change Policy with Chicago United for Equity

What will it take to make Chicago an even more powerful city? At Chicago United for Equity (CUE), which has received steady support from the Trust since launching in 2017, the key is ensuring the people most affected by policy decisions are active participants in determining their future.

“We’re a community of racial justice advocates working to bring the power to make policy closer to the communities living in it,” said Niketa Brar, CUE’s founding executive director.

At a time when racial equity has become a rallying cry for many organizations, CUE’s work has been grounded in this idea since it began. The organization’s approach is emblematic of the Trust’s Building Collective Power strategy, said Daniel Ash, who leads that strategy team.

“Too often, philanthropy and others who care about residents living in disinvested communities start with what’s important to us,” said Ash. “Building Collective Power turns that around and starts with what is important to them by supporting residents to harness their power to make positive change in their neighborhoods.”

Maritza Bandera, a program manager on the Building Collective Power team, added that CUE’s work fires on all three cylinders of the Building Collective Power strategy–People, Voice and Action. People is about “bringing together community residents leading grassroots change,” she said. Voice focuses on supporting community-centered platforms that amplify authentic local narratives and bring vital information to communities. Once residents have organized with the information they need to set their agenda, they can effectively take Action to change policies, systems, and structures that are not working for them.

CUE’s first project created a blueprint for its ongoing work. In 2016 Brar met Elisabeth Greer on the Local School Council (LSC) of National Teachers Academy, a Chicago Public School located near Chinatown [located between Chinatown, Bronzeville, and the South Loop]. They both shared a passion for educational equity in their neighborhood.

“We saw our role as LSC members as connecting our school with the larger citywide conversation. We came to realize that there were policy moves being made at the citywide level that would greatly impact our school,” said Brar.

Their instincts were right: In 2017, they learned that the City planned to close their school. The pair joined with fellow parents and neighbors to educate the community about the decision-making process and elevate local voices so that the community would be heard.

But “appealing to hearts and minds wasn’t working,” said Brar. So, they took a different approach: They applied a Racial Equity Impact Assessment to the decision. A REIA is a tool used to examine a policy proposal, quantify its unintended consequences, determine who benefits most and who will bear the most burden, and identify alternatives for achieving the same intent without harming historically burdened groups.

It worked. In December 2018, the court ruled in favor of their injunction to stop the school closing on the grounds of racial discrimination. “Not only were we able to show there would be racially disparate outcomes, in particular for Black students, but we could show there were alternatives that did less harm,” said Brar.

Today, CUE champions the use of community-led REIAs. The organization has trained more than 200 people to use the tool in their own communities and works to encourage the use of REIAs by government agencies across Chicago.

CUE began a fellowship program in 2019, a nine-month experience that is establishing cohorts of changemakers in the most impacted Chicago neighborhood, working in and across civic institutions and communities. “CUE Fellows join with us to find their thought partners for reimagining the city. It’s a community of practice for people who want to make change,” said Brar.

“Racial equity work requires acknowledging history and then taking action toward correcting the stories and practices that erase, water down, and co-opt Black, Indigenous, and People of Color’s history and culture,” said Tiff Beatty, a 2019 CUE fellow and current Senior Fellow leading CUE’s Just Action Racial Equity Collaborative. “It requires us to reflect on our relationship with the past in the present and ask what it means for our future.”

To provide a less intensive way for more Chicagoans to learn about decision-making systems and leverage their own power to affect those systems, CUE is piloting the People’s Policy School. The program, launching in October, is a public programming series that aims to engage more Chicagoans in learning about decision-making systems and leveraging their own power in those systems. While CUE’s fellowship continues to offer space for a limited number of people each year, the People’s Policy School will be open to anyone interested in changing how Chicago works.

CUE also engages more broadly in communities. For example, the People’s Budget [link to video when posted] project demystifies how the City of Chicago develops its annual budget and provides an accessible, inclusive, community-led process for residents to define and communicate their budget priorities to the City. The program’s popularity challenges the notion that residents don’t understand how policies affect them or don’t want to have a say in the decisions that affect them. Rather, says Brar, the processes by which residents historically have a say are broken.

“Town halls, for example, typically give people two to three minutes to speak, and in those three minutes, you’re to identify all the harm of the past decades, solve all of the problems of the city, and identify the way forward,” said Brar. “We just don’t think that’s the way.”

CUE’s Just Action campaign seeks to build on the momentum stirred by recent racial uprisings by creating accountability and tools for people to make meaningful change. Individuals and organizations can sign on to the Just Action pledge to acknowledge that systemic and structural racism have shaped our lives, we must shift power to groups that have been historically marginalized, and we need to develop numbers and narratives that hold those systems accountable to better outcomes. Those who sign the pledge are welcome to join a community of practice and develop a vision for change.

“Our goal is not only to help solve specific equity barriers confronting our communities today, but to improve the process for next time to prevent these same problems from happening again or in other communities,” said Brar.

To learn more about Chicago United for Equity, visit www.chicagounitedforequity.org.