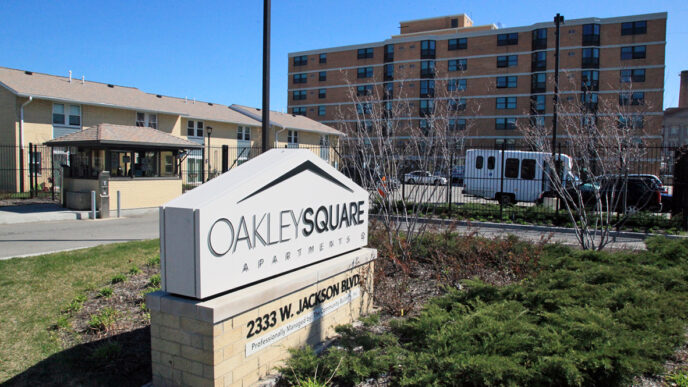 Stepping off an elevator, a young man with neatly cornrowed hair and dressed in a freshly pressed gray-striped polo shirt heads for the two rooms that house a small onsite clinic in Oakley Square.

He tells the clinic staff that he wants his blood pressure checked. He eats “a lot of salty food” and wants to make sure it’s not too high.

[pullquote]At West Side apts, a conversation about health leads to an on-site clinic, a new view of doctors + more[/pullquote]

After taking the readings, nurse practitioner Terry Gallagher assures him that they’re normal. With a round of thanks to Gallagher and the two nursing students assisting at the clinic, he heads off to work.

Drop-ins like this are par for the course since Rush University Medical Center opened the clinic last year. Now, residents of this West Side affordable-housing complex can easily get blood pressure readings, wellness checks and information on managing chronic health conditions such as asthma and diabetes.

Clinics like this one—easily accessible, fully equipped and run by trained medical staff—provide an important weapon in the fight to improve health outcomes for lower-income African Americans, like the residents of Oakley Square.

This clinic, too, is concrete evidence of the positive impact of On The Table. Oakley Square’s nonprofit management company—The Community Builders, or TCB Inc.—has hosted an On the Table conversation each year since the event debuted in 2014.

Nurse practitioner Terry Gallagher checks blood pressure at the Oakley Square clinic. The apartment complex used On the Table to have a conversation about health—and then made residents’ wish for an on-site clinic come true, through a partnership with Rush.

In the second year, when health was among the conversation topics, residents shared their dream of an on-site clinic. The biggest hurdle: money.

Representatives from Rush took heed and provided funding, using the proceeds from a bond sale. They named the clinic in memory of a late board member, Sue Gin. Meanwhile, TCB Inc. got wind that a clinic in DuPage County was shutting down and had furniture free for the taking.

“I had to go and get it that same day,” says Rose Mabwa, senior community life manager for TCB Inc.

Nurse practitioner Gallagher says the community’s leadership was key to her decision to apply for the job of supervising the clinic. “It wasn’t Rush going out and saying, ‘We want to do this.’ The community wanted it,” she explains. “So I figured when it came time to open, it would ease recruitment of patients.”

In part one of our series exploring Oakley Square, Rose Mabwa explained changes the community made to address safety and crime. Read more: At West Side Housing Complex, Inventing a Place to Call Home

“People began telling me about their health problems, asking how they could make it better. Education seemed like a huge need,” Gallagher says. “For example, a lot of people were not aware their food choices affect their diabetes, and their ideas of healthy food are not always correct.”

Rush also offers Monday evening wellness sessions, where residents can have their weight and blood pressure checked, and learn CPR and other techniques.

“People who have been with us since the beginning are saying, ‘I feel so much better. I’m glad you’re here,’ ” Gallagher says.

The clinic is open just 3 days each week, but Gallagher hopes to expand to five days and bring in more personnel, including a mental health practitioner who can help residents manage the life challenges that can contribute to physical illness.

“Stress management is a huge thing,” says Gallagher. “It would be good to have an expert here.”

Rose Mabwa, senior community life manager at Oakley Square, listens during a resident meeting. From the new health clinic, to a new security company, to safe activities for teens: Mabwa has learned that “when people talk and start taking ownership of their community, it not only raises issues, but solutions.”

The partnership between Rush and Oakley Square has borne fruit on another front, one that started with the Women of Wonder Book Club. TCB launched the club to provide a space for women to share their issues and concerns with one another.

The group read the best-selling The Immortal Life of Henrietta Lacks, a vivid work of nonfiction about the black woman whose cells were taken without her knowledge while she was being treated for cancer. Those cells, bought and sold millions of times since then for use in research, have become one of the most important tools in medical investigation. Yet Lacks’ descendants never knew about what happened nor reaped any financial benefit from the sale of her cells.

Afterward, book club members were eager to talk about its theme of exploitation and discuss why many African Americans distrust the medical community, given notorious incidents such as the Lacks story and the Tuskegee syphilis experiments.

Rush responded by inviting the women to be part of a panel discussion, with several hundred attendees, to talk about bridging the divide between doctors and black patients.

“Each party learned some things that day,” says Cassandra Cherif, a leader of the book club and a long-time resident. “It was good feedback, learning that [young doctors] might be scared of patients, and patients are scared of them.”

“People who have been with us since the beginning are saying, ‘I feel so much better. I’m glad you’re here.’”

This year, Cherif hopes the On The Table conversation tackles another serious issue: drug addiction. She sees a promising potential for connection between the need for addiction treatment, and the plan to offer mental health services in the clinic.

Listening to Cherif’s inspiration, Mabwa nods in agreement. “Ideas come out at On The Table, and we make it happen,” she says.