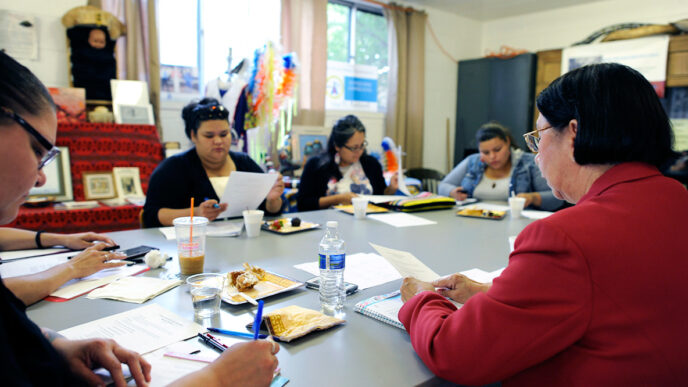 Many people picture Native Americans living on reservations scattered across the rural hinterlands. But 70 percent of our nation’s 5.2 million Indians actually live in cities like Chicago—and receive a small fraction of the support available to help move out of poverty.

Dr. Dorene Wiese, chief executive officer of the American Indian Association of Illinois, explains that urban American Indians, like the 27,000 living in Chicago, are not getting the help they need to overcome obstacles that keep many of them poor. Only 1 percent of the money the Indian Health Service disburses goes to city dwellers; reservation-based Bureau of Indian Affairs schools and programs and tribal colleges receive most of the educational funding.

“The tribes [on reservations] are getting all the money. The idea is that they will serve all their members, but that’s not true,” Wiese says. She is leading a call for much more funding to be directed to the cities, where most Indians live now.

A member of the White Earth Ojibwe tribe of northwestern Minnesota, Wiese has been working for four decades to help her fellow American Indians succeed in school, get good health care, ameliorate the poverty that afflicts about one in four, and build up a sense of pride in their history and traditions.

While 29 percent of all Americans ages 25 and older hold bachelors degrees, only 15 percent of Native Americans do. Many students need a high-school equivalency degree before they can even enter college, as Indians’ difficulties with school often begin early, Wiese says. The way American schools teach is not the way Indians learn.

“We’ve had thousands of years of our own educational system,” Wiese explains: a system based on lessons passed down for generations through a tribe’s elders. But Indian children need to succeed in the mainstream educational system, too. “We need to walk both those paths.”

Wiese was active for 30 years in the Native American Educational Services College, which operated on Chicago’s north side and at a few other campuses around the nation. The college, which individualized curriculum to make college attendance easier for students who often had full-time jobs and little or no support, boasted a 70 percent graduation rate. But it struggled for funding, and closed in 2005.

Dr. Dorene Wiese founded the American Indian Association of Illinois to serve the community of 45,000 Native Americans in Cook County. Federal funding for education and anti-poverty programs is concentrated on rural reservations, leaving little support for the 70 percent of Indians who live in American cities.

Wiese’s own family left the White Earth reservation in the 1950s, when hundreds of thousands of American Indians were being lured from their lands in a misbegotten federal campaign to empty out the nation’s reservations. Many Indians looking for better lives in cities found themselves mired in poverty, due to “discrimination, language and cultural barriers, ghetto housing, lack of adequate day care, homesickness. Many were only given short-term training for low-paying jobs,” Wiese says.

Her own family went to Minneapolis, where her father often worked two jobs, as a seasonal welder or mechanic, and her mother waited tables.

“We were often without health care, dental care, even food, clothing and shelter,” Wiese recalls. “When my parents had saved enough money to purchase a home in Minneapolis, our neighborhood voted to keep us out.”

Wiese’s own three siblings dropped out of high school, but Dorene was determined to use education as her ticket to a better life. She was one of seven American Indians to graduate from public high school in Minneapolis in 1967. After moving to Chicago, she pursued her studies and earned a doctorate in education.

Wiese sees the disenfranchisement of American Indians from the education system as a tragedy of wasted potential. Knowledge, innovation, creativity: “We have so much to contribute.”