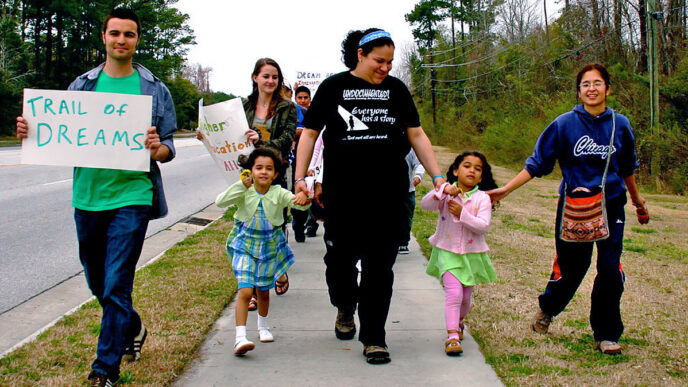 Blazing a ‘Trail of Dreams’ for Undocumented Youth

Immigration-reform activist Maria Gabriela “Gaby” Pacheco says she has never been afraid of speaking out. Even though she lacks documents, she lives as if she owns the rights guaranteed in the United States, the country where she grew up.

Pacheco spoke with WBEZ reporter Linda Lutton in the auditorium at Benito Juarez High School as part of the Chicago Humanities Festival on Sunday, November 8, which featured a special day of programming presented in the Pilsen neighborhood. More than 25 programs were presented in Pilsen for the first time as part of the closing day of the festival; the Trust was the lead partner for the fall festival.

Pacheco is probably best known for walking 1,500 miles with three other undocumented students from Miami to Washington, D.C., to draw attention to the anguish of the millions of unauthorized immigrants who live under constant threat of deportation.

Recalling the four-month trek, dubbed “The Trail of Dreams,” Pacheco said, “We knew America was better than what we were seeing in the news.”

Pacheco, who was born in Ecuador, was a major force behind the 2012 implementation of the Deferred Action for Childhood Arrivals policy (DACA), which allows undocumented people who came to the United States as children to work without fear of being deported.

She has also supported DREAM Act legislation that would give undocumented young people the right to go to college and serve in the military, earning a path to citizenship in the process. And she founded a group in Florida, Students Working for Equal Rights, to lobby for in-state tuition for undocumented students.

Pacheco now is program director at TheDream.US, a scholarship program for undocumented young people. Her courage has earned her a number of honors over the years: In 2013, she became the first undocumented Latina to speak before Congress, and she was recently named one of Forbes magazine’s “30 Under 30: Education in 2015,” to name just a few.

Pacheco came to Miami with her family on a tourist visa when she was eight years old, she told Lutton during their conversation. When their visas expired, the family stayed on—a story common to about 40 percent of undocumented people in the United States.

Living without documents was hard. It meant never going back to Ecuador to visit, never seeing grandparents. One of her sisters tried to go to college to be a nurse, another sister tried to join the military—but because they were undocumented, neither of those plans were possible.

“I saw that heartbreak,” Pacheco recalls. “It scared me and made me angry. Going to college was something that had been ingrained in us since we were little kids.”

Pacheco herself later graduated from Miami Dade College with a degree in special education, so she knows that college is “not a false hope” for undocumented young people. DACA is not a permanent program, but it has been extended once and may be extended past its present 2017 end date, she says.

Pacheco began speaking out in a public way when she was still a teenager. “I didn’t understand the consequences,” she says. “People started seeing me as an expert. I would speak to reporters, tell my story. People would say, ‘Aren’t you afraid?’ The norm was to hide your face.”

She wasn’t afraid, but in 2006, officers from U.S. Immigration and Customs Enforcement “came to my house looking for me. They detained my family. It was the scariest day of my life. It changed a part of me.”

What led to her famous walk, Pacheco says, was realizing how much her parents had sacrificed to come here to make a life for their children. “They were the original dreamers,” she says. She wants to honor “the hard work our parents do to make sure we have the opportunities of their dreams.”

Immigration has been happening “since the Mayflower,” Pacheco says. “People came for work opportunities, religious freedom, to flee violence. It’s something that naturally happens. Building a wall won’t fix anything.”