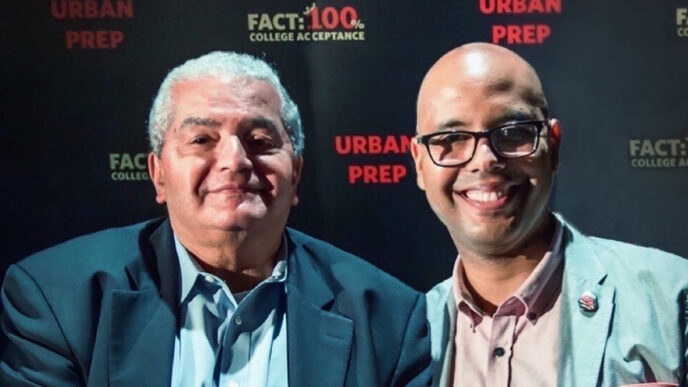 Tim King, founder and CEO of Urban Prep Academies, remembers being surprised that someone as esteemed as Donald Stewart took an interest in his work. At the time, Urban Prep was a fledgling startup with just one campus, about 100 students, and so new there hadn’t even been a graduating class yet.

But Stewart, a career educator and former President and CEO of The Chicago Community Trust made a commitment to support King’s mission of increasing the number of young Black men attending college. Stewart and his wife Isabel became tireless supporters of Urban Prep, raising money for the institution and providing support and leadership for students in any way needed. Urban Prep now boasts three campuses citywide and is a national education model with a 100 percent college acceptance rate for its all-male student body. In the process of working together, Stewart also became King’s mentor and friend.

“Don was a giant in the world of education and philanthropy. His legacy lives on in the millions of people his work impacted. It’s essential that justice warriors like Don be recognized, so the creation of the Fellowship in his name is nothing short of amazing,” King said. “As for me being selected as the first recipient, it’s an incredible honor. It not only validates the work we’ve done at Urban Prep, but also inspires me to continue to work hard and aspire to the greatness that Don represents.”

The purpose of the fellowship is to spotlight African American leaders whose accomplishments mirror Stewart’s dedication to education, diversity and inclusion. In addition to his tenure at the Trust, Stewart was president of Spelman College, head of the College Board (which administers the SAT and college scholarships) and a director of the New York Times Company, among other achievements.

“Tim King’s leadership, vision and boundless energy in service of educating young Black men is nothing short of awesome. I have watched him lead with courage, enthusiasm and optimism. And I have watched young men’s lives be transformed,” Pattillo said. “It seems fitting that the first Don Stewart Fellowship would go to Tim King.”

King said the Fellowship would help him to advance the mission of Urban Prep.

“The Fellowship will allow me to further my research and study of the challenges facing young Black men in our country, and the ways to address those challenges through interventions like Urban Prep.”