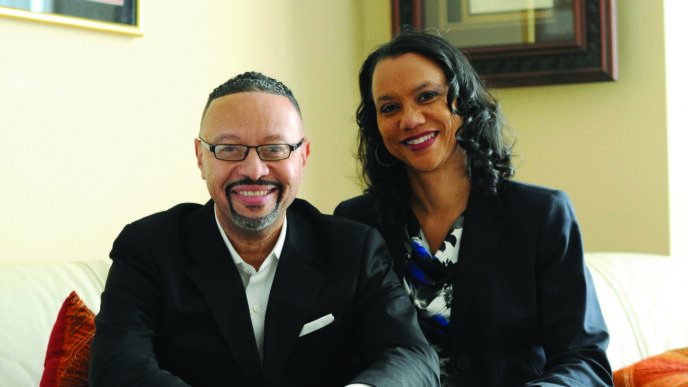 Bill and Cheryl Lowry Seize the Moment for Change

The shooting of Hadiya Pendleton on Jan. 29, 2013, hit close to home for Bill and Cheryl Lowry. The 15-year-old honor student was caught in the crossfire of gang violence in a park about 10 feet from the Lowrys’ backyard. The tragic incident not only garnered national headlines and cast the spotlight on gun violence in Chicago, it also troubled the Lowry family to see the problem so close to their doorsteps. That’s when their 17-year-old son Evan asked them, “What are you going to do about all this violence around us?”

The Lowrys responded to their son’s call to action: They created the It’s Time Organization to prevent and reduce violence in Chicago and partnered with The Chicago Community Trust to aid the new organization in fulfilling its mission.

Founded in 2013, the It’s Time Organization, or TITO, makes grants to nonprofits that work to alleviate violence in the South Side. TITO awarded one of its inaugural grants this past year to BUILD, a nonprofit that provides programs for at-risk youth in the West Side, to expand its leadership and career-preparation programs to the South Side for 10 to 15 teenagers. In addition, because TITO members believe a vibrant and thriving healthy community is key to thwarting violence, they also awarded a grant to Quad Communities Development Corporation to support the economic development of North Kenwood, Oakland, Douglas and Grand Boulevard.

[pullquote]Philanthropy or keeping the ladder down is the responsibility of anyone who has ever been helped by someone. — Bill Lowry, co-founder of the It’s Time Organization[/pullquote]

These inaugural grants cap off a busy year for TITO. The organization held a successful fundraiser, exceeding its goals by 50 percent. It has recruited more than 60 members and donors that meet every other month to discuss the best ways to tackle violence in their communities and determine the nonprofits they would like to support. And TITO counts policy makers and influencers such as Cook County Board President Toni Preckwinkle and Mayor Rahm Emanuel as supporters.

The Lowrys credit the Trust for helping TITO to get off to a strong start. After the Pendleton shooting, the couple wanted to hold a fundraiser immediately for TITO because the issue was top of mind for many concerned residents. But they thought they needed to wait until TITO received its 501(c)(3) nonprofit designation. “You need to seize the momentum while you’re at the height of it. I was waiting for the 501(c)(3) designation to come through for our group before we could get everyone together and have an event where we could garner support for TITO,” Bill Lowry says. “And then it came to me that the donor advised fund would work.”

The Lowrys established a donor advised fund at the Trust for TITO so the organization could start raising funds and engaging donors right away. By housing TITO’s contributions in a donor advised fund, donors to TITO receive immediate tax benefits. In addition, the Trust provides financial management of the fund and handles administrative tasks, including preparing and filing tax returns for the fund. And the Trust can use its grant making expertise to help TITO evaluate nonprofits that it may want to support.

The Lowrys are still waiting for TITO’s 501(c)(3) designation, but they are no longer concerned about the protracted process. “As long as we’re collaborating with the Trust, we’ll just keep moving forward,” says Cheryl Lowry, a dentist.