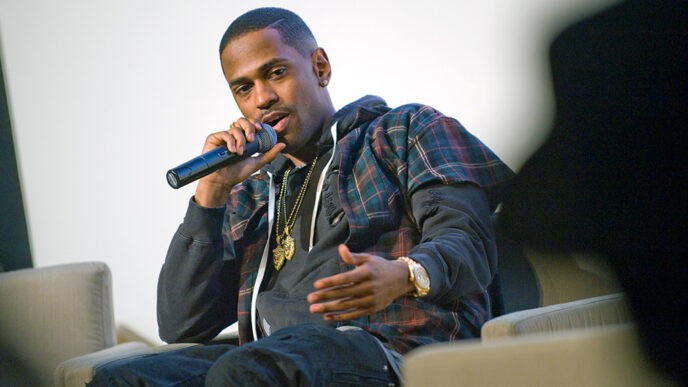 Big Sean Inspires Young Performers With a Look ‘Behind the Mic’

Music superstars Big Sean and Rhymefest heated up the Chicago Cultural Center on January 10, bringing wisdom to the young performers aspiring to follow in their footsteps.

Behind the Mic, a lecture series of Donda’s House, hosted Roc Nation recording artist Big Sean for a night of conversation about the music industry, his rise to fame and his advice for the 300 young performers in the audience.

The event was part of The Chicago Track, a free industry school for film and music for young adults. Between August 2014 and April 2015, The Chicago Track exposed participants ages 18 to 25 to industry leaders, providing a grounding in the history of music and film in Chicago, and helped develop the skills and strategies to prepare young creatives for employment in the film and music industries.

The Chicago Community Trust provided funding for The Chicago Track as part of its ongoing commitment to enrich the local arts sector, and build meaningful connections between Chicago’s residents and workforce opportunities.

Behind the Mic kicked off with introductions by Grammy-winning local artist Che ‘Rhymefest’ Smith and Kevin Coval, artistic director of Young Chicago Authors. Up-and-coming artists from Donda’s House and The Chicago Track also performed, before headliner Big Sean joined them on stage for an audience Q&A about pathways to success.

The star spoke candidly about his struggles on the way up and since breaking into the industry in 2007, when he was signed by Kanye West’s label. His mother Myra Anderson was also on hand, to offer the attendees a candid description of trying to make it as a performer.

Smith echoed the evening’s importance for young musicians. “Our youth in Chicago need access to high profile creatives. We are proud to partner with The Chicago Track and the Sean Anderson Foundation to make access a reality.”

The event was presented in partnership with The Chicago Track and The Sean Anderson Foundation. Sponsors and funders included the Department of Cultural Affairs and Special Events (DCASE), Young Chicago Authors, Free Spirit Media, Contexture TV, Shine On Chicago and Hard Rock Hotel, in addition to The Chicago Community Trust.