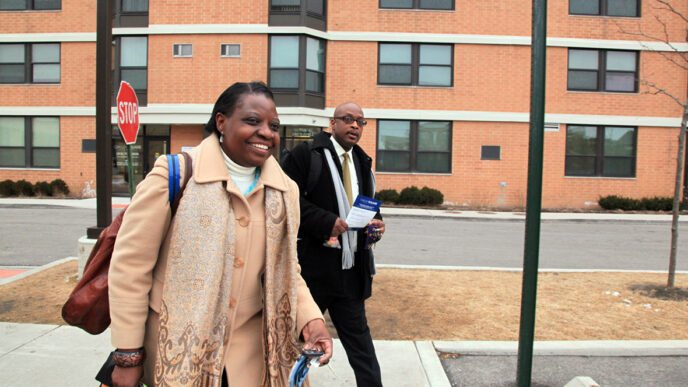 At West Side Housing Complex, Inventing a Place to Call Home

Four years ago, the Oakley Square apartments were no place to live.

The rundown complex at the corner of Jackson Boulevard and Western Avenue was in dire need of repairs, and drug activity and crime was a near-constant danger. The situation was so bad that the federal Department of Housing and Urban Development asked national nonprofit development corporation The Community Builders, or TCB Inc., to step in and take over the management.

TCB’s approach is to build community among the residents of its mixed-income and affordable housing developments by providing support services and bringing in outside partners. One of its first steps was to take a survey of residents, recalls Rose Mabwa, senior manager at TCB-Oakley Square.

“We asked, ‘What would it take to make Oakley Square a place you would want to call home?’”

By coincidence, that conversation unfolded just as The Chicago Community Trust launched On the Table, an initiative which brings together individuals from diverse backgrounds to share a meal and discuss strategies to solve the problems facing their communities.

TCB-Oakley Square’s first On The Table helped lay the groundwork for initiatives that are still bearing fruit. Now, On The Table is an eagerly anticipated annual event.

“Everyone talks about it. They’re waiting for it to happen,” says Shaun Reed, community manager for TCB-Oakley Square.

After the first On the Table community gathering, residents planted the seeds of a range of innovations—including hip-hop dance lessons, open-mic nights, community safety meetings and an on-site health clinic.

That first year, 14 people came to On The Table, including the local police commander, young residents and the alderman. Some surprising insights emerged. One ‘aha moment’ was the revelation that fear kept young people, who desperately needed “something to do,” from taking advantage of existing programs: They were afraid to go to a nearby Boys & Girls club because “they would have to cross gang lines,” says Mabwa.

Another insight that was especially important for Oakley Square as an African-American community struggling to deal with crime: Police “wanted to do things with us,” Mabwa says. “They told us, ‘We don’t want to hurt you. We want to help you.’”

The first On The Table was so successful that Oakley Square expanded it the following year, opening up the discussion beyond youth and safety to other topics including health and civic engagement. This year, 50 people are expected.

Some of the initiatives that have emerged or expanded through the relationships forged through the event include hip-hop dance lessons and open-mic nights for young people, regular meetings on community safety and an on-site health clinic.

“When you invite neighbors over and begin to talk about problems and ask each other ‘How can we resolve these problems together?’ over a meal—it’s magic.”

The secret to On The Table’s success? Mabwa believes it’s simple: Give people the opportunity and the resources to take charge of their lives and community, and they will.

“People really want to get engaged and do things, and dialogue is the key. Dialogue needs to happen,” Mabwa says. “And dialogue over food is magic. When you invite neighbors over and begin to talk about problems and ask each other ‘How can we resolve these problems together?’ over a meal—it’s magic.”

Building trust in each other’s skills and talents is also essential.

“Being trustful enough to reach out to neighbors and talk about how we can leverage resources— that conversation is really powerful,” Mabwa says. “When people talk and start taking ownership of their community, it not only raises issues, but solutions.”

“You have to acknowledge that people have talent and give them a platform to show their talent,” Mabwa adds. “It’s an interchange of talents and gifts.”

Rose Mabwa, senior manager at TCB-Oakley Square, has been essential to the complex’s revitalization. “People know a lot of good things are happening here,” Mabwa says. “It’s about not just transforming one complex, but the larger community.”

The partnerships and initiatives now taking shape at Oakley Square are another sign of the positive change emerging in the surrounding neighborhood, including the construction of the Chicago Bulls’ new Advocate Center and the new Malcolm X College, a hub for training in health care careers.

“People know a lot of good things are happening here. We have the hope that things are changing,” Mabwa says. “In the end, it’s about not just transforming one complex, but the larger community—and asking, how do we make a city successful for everyone?”