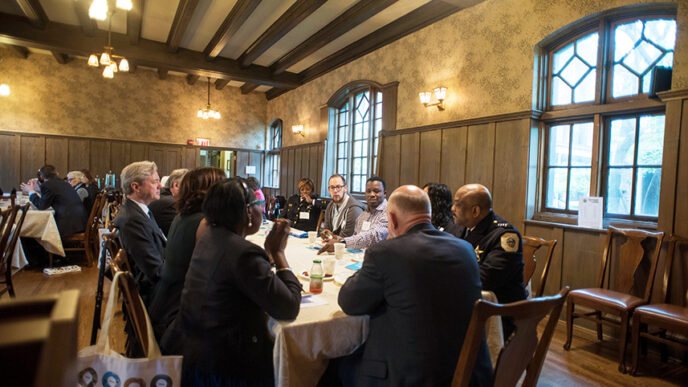 At This Breakfast Table, Police and Neighbors Talk Racism and Reconciliation

On May 10, Chicago Police Superintendent Eddie Johnson told his breakfast companions that he’s been “doing a lot of listening” lately, as he and his department set about trying to “repair our relationship with the community.”

The group of about 50 community leaders had come together as part of On the Table 2016, a day which united more than 55,000 people across the region in small mealtime conversations about their shared community.

Gathered in the Jane Addams Hull House Museum dining hall, this group was engaging with one of the most urgent topics of our time: Can the police department do its job—according to Johnson, “enforcing the law and keeping the peace”—in ways that are just and equitable for minority communities?

Supt. Johnson grew up in Chicago’s Cabrini Green housing project and later on the South Side, where he still lives. The Chicago City Council confirmed him as superintendent on April 13, the same day a scathing report emerged from a task force appointed to assess the Chicago Police Department.

“The community’s lack of trust in CPD is justified,” the report concluded. “CPD is not doing enough to combat racial bias.”

But Supt. Johnson said at the Hull House breakfast that he believes “we all want the same thing”: a peaceful city that works for all its citizens.

“My challenge is to bring our cultures together.”

At an On the Table 2016 breakfast discussing policing in communities, Chicago Police Superintendent Eddie Johnson talked about his experience as a 27-year veteran officer. “We all want the same thing,” Johnson said. “My challenge is to bring our cultures together.”

As influential leaders and thinkers gathered in that dining room to talk about how to achieve real change, the Hull House On the Table breakfast stood in a tradition that stretched back to 1889. That was the year reformer, social worker and community activist Jane Addams opened her historic settlement house in the heart of an eclectic immigrant neighborhood on the Near West Side.

Hull House soon emerged as an important national forum. W.E.B. DuBois, Eleanor Roosevelt, John Dewey and Ida B. Wells were among the national figures who came to Hull House to discuss their ideas.

“Jane Addams, one of the founders of the social justice movement in Chicago, convened a series of conversations around the important issues of her day,” said The Chicago Community Trust president and CEO Terry Mazany. “We are standing on the shoulders of those people in our own discussions.”

Mazany and Supt. Johnson shared the breakfast table with, among others, Chancellor Michael Amiridis of the University of Illinois at Chicago; Steve Everett, dean of the UIC College of Architecture, Design and the Arts; Jennifer Scott, director of the Hull House Museum; Lt. Gloria Hanna-Gill, commanding officer of CPD’s Juvenile Intervention Support Center; broadcast journalist Robin Robinson of WVON and WYCC-TV’s “In the Loop”; and attorney Marian Jacobson of Know Your Chicago.

New security, a new health clinic, safe activities for kids: Check out our three-part series taking you inside Oakley Square to see the changes they’ve made since the last On the Table: At West Side Housing Complex, Inventing a Place to Call Home

Shields asked Supt. Johnson to explain the process for police officers who go out to community gatherings—Chicago Alternative Policing Strategy (CAPS) meetings, for example—to “bring back what they’ve learned to share with the department.”

Johnson replied, “That’s easy. There is no process.” The table shared a breakthrough moment in their conversation, as Johnson agreed that the Department needed to put such a process in place.

Community life manager for TCB, Inc. Rose Mabwa, left, and journalist Robin Robinson joined the police officers and community activists in the Hull House Museum dining room, which has been the scene of mealtime conversations among American thought leaders from W.E.B. DuBois to Eleanor Roosevelt.

The Superintendent said he plans to sit down over the coming months with many more Chicagoans from all walks of life—every one of whom has a personal stake in how the police interact with the community.

“We have a long way to go to repair the trust, but you’ll never get there if you don’t have dialogue,” he said, calling for the department to become more transparent and more honest.

“The bias has to stop,” Johnson said. “If the CPD is better, Chicago will be better.”

All the community organizers at the table stressed the importance of events that bring young people together with their elders, especially with representatives from institutions like the CPD, in a way that makes them feel they are part of the structure of their community.

That’s the purpose behind the Youth 5K Bike-a-Thon event on June 4, which Mabwa and her coworkers are planning for their West Side neighborhood.

More than 55,000 people around the region were part of On the Table 2016, sitting down together for 3,500 mealtime conversations about community. As Trust president and CEO Terry Mazany explains, the annual event “provides a venue where voices that are too often missing from the conversation are invited and have equal standing.”

Mazany echoed the importance of grassroots activities to change communities as he introduced the Acting Up Awards. New to the On the Table experience this year, the grants of $1,000 are designed to act as “rocket fuel,” in his words, to launch great ideas surfaced during the event off the ground.

Mazany noted, “What is unique about On the Table is that it provides a venue where voices that are too often missing from the conversation are invited and have equal standing.”