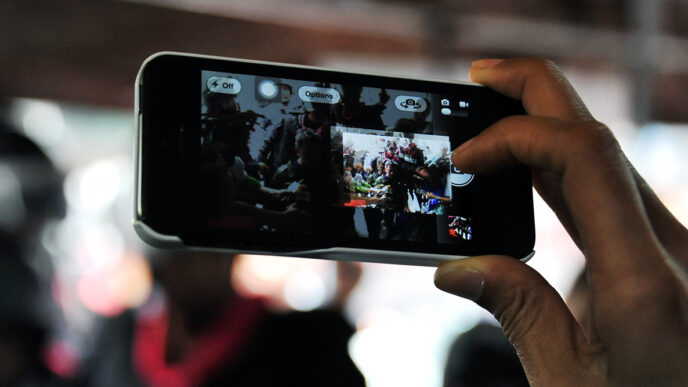 Technology can play a powerful role in helping marginalized communities come together quickly and effectively around crucial issues. That was the message of two experts who spoke at “#justice,” a presentation of the Chicago Humanities Festival at the National Museum of Mexican Art in Chicago’s Pilsen neighborhood.

The event was part of the festival’s The Chicago Community Trust Day— Sunday, November 8, a special day of programming presented in venues throughout Pilsen in recognition of the role the Trust played as the CHF’s lead partner this fall.

Ellis signed on to Twitter in 2009 and soon found herself in the thick of a new social phenomenon known as “Black Twitter.” As Dr. Goddess, she has gained international recognition for writing about this outspoken online community of African Americans, parsing the influence it has come to wield and the clueless commentary it often elicits from white observers.

Iberkleid began teaching computer skills to Hispanic people as a volunteer in 2011 in Carrboro, a town outside Chapel Hill, North Carolina, where he was in graduate school. Iberkleid was born in Bolivia; Spanish is his first language. Now he helps members of digitally underserved communities connect with apps and a platform he has invented that cobbles together text messaging, the Internet and the good old voice telephone.

Ellis and Iberkleid have both forged careers in the place where technology and social justice intersect, and they gave fascinating insights into the way minority communities are putting technology to work to serve their lives and culture.

Iberkleid began teaching computer skills to Hispanic people as a volunteer in 2011 in North Carolina. From his students, he learned about their needs for information: about job opportunities, community events, missing persons and, most urgent of all, police activity in their areas, like checkpoints set up to snare undocumented workers.

Ellis noted that African Americans used to worry about the “digital divide,” fearing that poor members of their community would be shut out of good jobs and a place in the mainstream culture because they didn’t have the same access to computers and the Internet that more affluent people had.

Then along came smartphones, which are not only more affordable than those early computers, but also hard to do without. According to a 2014 Pew Research Center study, 64 percent of American adults now own a smartphone, up from 35 percent in 2011.

As a result, today “there is no digital divide,” Ellis said. Instead, there has been a “transference of technology to Twitter.” About 22% of African-Americans who use the Internet are Twitter users, compared with 16% of online whites, according to a PRC study.

Twitter has served as an important tool for gathering and disseminating information about the violence and death young black people have suffered at the hands of police around the country. It birthed #blacklivesmatter, the hashtag that became a movement after the 2013 acquittal of George Zimmerman, who had been charged with second-degree murder in the death of the African-American Florida youth Trayvon Martin.

Twitter “creates an opportunity for anyone to become an activist,” Ellis said.

But even Twitter doesn’t reach every group, Iberkleid noted. His platform, ReK2.net (pronounced “recados,” Spanish for “messages”) serves people who want instant access to information—about job opportunities, community events, missing persons and, most urgent of all, police activity in their areas, like checkpoints set up to snare undocumented workers, which Iberkleid said is a common occurrence in some places, especially in the South. He learned about this need from his Hispanic students when he was a volunteer computer-skills teacher.

“Connections build community. It’s important to have a human contact,” especially among people whose daily lives are filled with fear, said Iberkleid, who is now based in Cleveland.

It turns out that the telephone, with its familiar form and comforting human voice on the other end, can be “the perfect interface” for some people. Information can be conveyed more accurately and discreetly, and the spoken word conveys emotion, which is important to people who are used to interacting in person, Iberkleid said.

ReK2.net and the mobile community Iberkleid has founded together have a million subscribers, and are now available to users who speak English as well as Spanish.

The community is called PaseLaVoz: Spread the word.