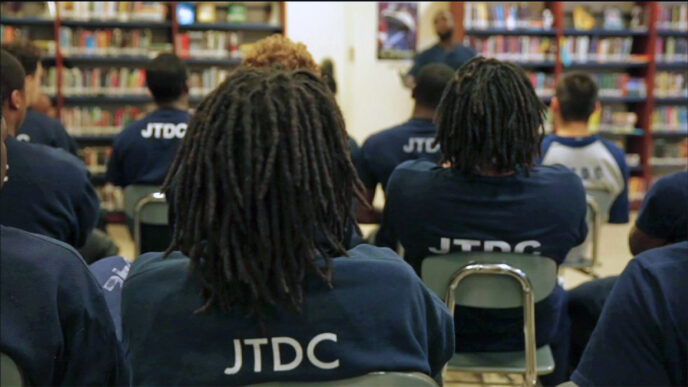 An On the Table discussion at the Cook County Juvenile Temporary Detention Center in May 2014, where young residents shared their hopes and frustrations, led to an “aha!” moment—and to a new home for a promising initiative that helps young people find alternatives to crime and violence.

The Project Safe Neighborhoods Youth Forums, a joint federal/Chicago Police Department initiative, evolved out of work for more than a decade with adults on parole and probation. PSNYF was created to serve young probationers—but was having a hard time attracting participants.

“We were competing with other worthy programs,” said Beth Ford, deputy director of the Chicago Police Department’s community relations division. “We hadn’t realized how much was out there for young people on probation. They had lots of other options.”

At that On the Table discussion in May 2014, Juvenile Temporary Detention Center residents and staff gathered around four tables, sharing barbecue from Sweet Baby Ray’s. Four pastors from the South and West Sides served as moderators and posed questions, while residents used handheld keypad devices to respond.

The devices allowed the young people to ask questions and comment candidly knowing their identities were safely anonymous, according to Suzanne Connor, a retired senior program officer for The Chicago Community Trust who helped organize the session.

Project Safe Neighborhoods Youth Forums, a program designed to reduce crime and conflict, was struggling to reach young people on probation—until an On the Table conversation at the Cook County Juvenile Temporary Detention Center showed it was a perfect place for reaching young offenders even before their probation began.

Hearing about the discussion later, Ford realized the detention center might be the perfect place to house the PSNYF program. The young residents had raised intriguing and pertinent concerns at On the Table about their own relations with the police; the center had the structure of the Nancy B. Jefferson Alternative School; and it already offered programming through the Arts Infusion Initiative, funded by the Trust.

“The whole notion that we needed to think of ways to reach these particular kids about police-youth contact was spurred by discussion at On the Table,” Ford said. “These kids were having the worst encounters with the police”—encounters serious enough to result in their incarceration—and they were willing to talk about it.

PSNYFs’s curriculum has four sessions, which explore the perceptions and expectations residents have about the role of rules and the law in their lives; re-engagement with the community; relations with the police; and conflict at school and home.

For young people on probation, those sessions had been offered weekly. However, according to Ford, the average stay at the detention center is 21 days, and most kids stay just a week or so. So in this setting, the PSNYF program has been offered during school breaks, usually over four consecutive days.

Police officers, all of them high-ranking officials, come in to talk informally with the residents for the police-relations session. Ford said that has been the best-attended—in fact, the kids can’t get enough of chatting with the police.

“It’s been fascinating. They still have issues, but it’s given them a different perspective,” Ford said.

To date, 287 young offenders have completed the program, which includes face-to-face conversation with Chicago Police Department officers. “It’s been fascinating,” says Beth Ford, deputy director of CPD’s community relations division. “They still have issues, but it’s given them a different perspective.”

The PSNYF has a research component, too, and that’s another reason it’s important to keep the same young people in the program for all four sessions. The Chicago Crime Lab at the University of Chicago is looking at outcomes, said Jonathan Davis, a National Institute of Justice pre-doctoral fellow at the Chicago Crime Lab: Has the program made a difference in whether participants have gone back to school, how they have done there, and whether they have fewer arrests than former residents in the control group who were not exposed to the youth forums? The CCL hopes to publish results from its research later this year, Davis said.

Philippe Magloire, deputy executive director for programs and professional services at the Detention Center, called the youth forums “wonderful, impactful,” adding that they create “thoughtful interaction you don’t often see in programs of this type.”

So far 287 kids have gone through the program, including one group of girls and three groups of young people who had been charged as adults for serious crimes. The program will be offered during school break again this year.

Ryan Keesling, executive director of Free Write Arts and Literacy, a group that has worked with residents through Arts Infusion in the detention center since 2010, attended the 2015 On the Table discussion there.

Keesling said he has been gratified to see his fellow attendees get “a chance to break through that idea of ‘the other’… to get a sense that these are just kids, struggling with overwhelming circumstances.”