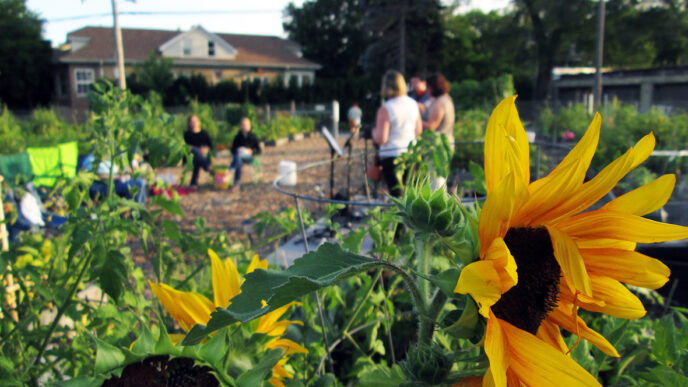 An Urban Gardener Builds a ‘Plot to Plate’ Movement for Chicago

LaManda Joy grew up in a gardening family. Her parents were of the generation whose legacy included the Great Depression and victory gardens in the ‘40s, and they “taught [her] to garden, can and preserve vegetables, and how to cook what you grow.”

That heritage led to what would become the Peterson Garden Project when Joy “bought a yard with a house attached to it” so she could put in a vegetable garden, and decided to look for a community in Chicago through her blog, theYarden.com.

Joy “started looking for other food gardeners, and realized most people didn’t know how.”

That realization has since grown into eight community gardens in Chicago, where Joy focuses on teaching people to grow their own food in temporary locations on undeveloped lots around the city. She now experiences what she calls “lot lust” when she sees possible pop-up victory garden locations—but securing the first one was nerve-wracking.

“When I found the first piece of land, I went into it alone,” Joy says. “I went into [40th Ward alderman] Pat O’Connor’s office with a 40-slide PowerPoint presentation to convince him of the victory garden idea, and by the fourth slide he said ‘I’m in.’”

What began as a solo mission quickly gained impetus and became the largest organic food garden in the city. Joy says, “It was me for about two weeks, then it was a resounding ‘us’ and has been ever since.”

Raised in a family who believed in “cooking what you grow,” LaManda Joy looked for a house with a yard when settling in Chicago. Her search to connect with other urban gardeners would evolve into the Peterson Garden Project, which today includes eight community gardens, educational programs and a cooking school.

That enthusiasm to be involved with gardening came at a time when “people were starting to get concerned about the food system.” As people joined the Peterson Garden Project, Joy found similarities with Chicago’s historic victory gardens: “90 percent of Chicagoans in World War II didn’t know how to garden, and the city taught them.” That parallel led Joy to “basically research what Chicago did, and copy it.” In working to make “long-term gardeners, not long-term gardens,” Joy’s mission is to educate people to connect with what we eat through growing.

That change has inevitably led to many secondary benefits of community gardens in people’s lives—from providing a space for children to learn where food comes from and neighborhood unification, to the Grow2Give program that donates a percentage of each garden to local food pantries. Now that the Peterson Garden Project has started to offer classes at their Community Cooking School, Joy is able to teach people in the community a “plot to plate” approach.

A plot at the Petersen Garden is home to chard, tomatoes—and a reminder of its community spirit. During World War II, the city offered programs to teach residents to create ‘victory gardens’; today, an interest in sustainable food systems motivates many residents to become part of community gardens. “I truly believe people want to do good,” says founder LaManda Joy. “And community gardens give people a place to do just that.”

Reflecting on how far the project has come, she says, “We wanted everything to happen in the first year. But now that we’re in our sixth year, it’s there. Good things take time. One person can make a difference; everyone should try. I truly believe people want to do good and community gardens give people a place to do just that.”