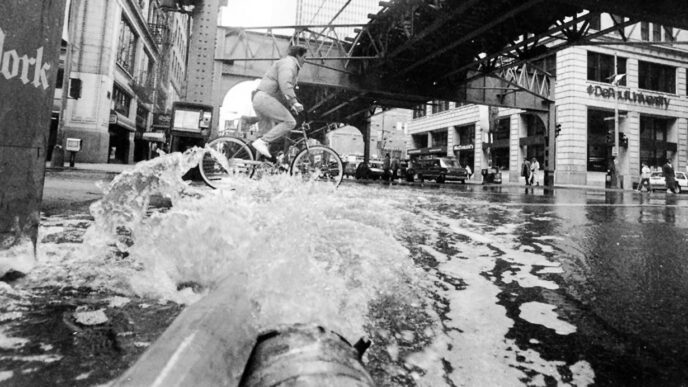 It began with the Merchandise Mart. Marshall Field’s was the second business to call the Fire Department. And then chaos reigned, as building after building reported massive flooding filling their basement levels, often spilling into the first floor.

It was quickly determined that, while driving pilings for work on the Kinzie Street bridge in January, the dredging company broke through a wall of the old freight tunnel system that runs beneath the Chicago River and the Loop. Although it was reported to the city, nothing was done until the wall cracked on April 13—and the river rushed in.

The tunnel system had once been used to deliver freight and haul away coal ashes. But they’d been disused since the 1950s; few people even knew of their existence by 1992, and they were used only for telecom cables. And as the tunnels filled with water, their doors—leading into every major building in the Loop—were rusted open.

As the Chicago Fire Department closed the Loop to the public, thousands of employees left their buildings and made the trip back home. At The Chicago Community Trust, Sandy Chears (now Phelps) was soon on the phone to colleagues, advising them not to travel to 222 N. LaSalle Street, the Trust’s offices at the time.

It took several days to pump out buildings and find a temporary fix to plug the hole in the tunnel roof, which finally stopped the river.

The Trust’s building turned out to be one of four that was closed the longest for pumping, repair and cleanup. 25 East Jackson, a DePaul University building, was another. Trust executive director Bruce Newman arranged temporary space in the building on the southeast corner of Wacker Drive and Madison Street.

An electrician in the basement of 222 N. LaSalle explores the source of flooding: the entrance to the old freight tunnel. Photo from the Chicago Tribune, in their 25th anniversary photo essay.

The staff of every office in 222 N. LaSalle was allowed back inside for a quick visit, to retrieve files and whatever else they could carry. That morning, everyone waited their turn in the dark lobby for a ride in the freight elevator. Each tenant was given only about ten minutes on their floor.

In Long’s words, the tunnel flood was “an eerie hidden disaster.” Loop streets remained full of pumping fire hoses and puddles for weeks, the only evidence on the surface that anything was wrong.

But underground, the chaos continued. The subway system was shut down due to potential leaks from the river and the compromised tunnel system. Chicago was declared a disaster area by the governor. The flood resulted in losses of $1 billion for businesses.

And after three weeks in temporary quarters, the Trust moved back to 222 N. LaSalle Street, getting back to business as usual.