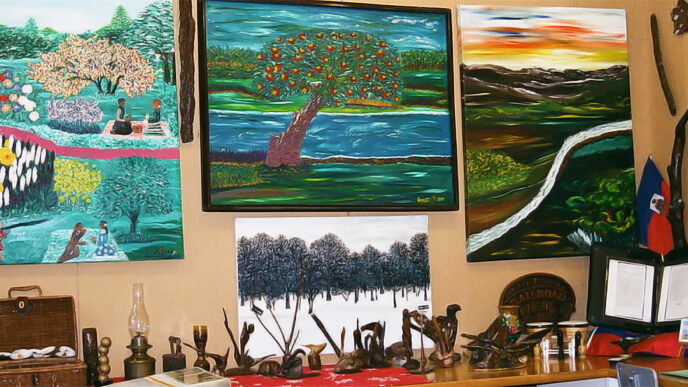 An Earthquake Inspires Expat to Launch Her Dream Museum

Though Haiti’s Jean Baptiste Point du Sable is widely recognized as the first permanent resident of what would become Chicago, many Chicagoans know very little about Haiti.

Seeking to change that is Elsie Hector Hernandez. She knows museums can be a powerful way to build bridges between cultures, break down barriers and deepen understanding.

Originally from Haiti, Elsie has a strong sense of attachment to her place of birth. It was that sense of pride that prompted her to open the Haitian American Museum of Chicago (HAMOC) in 2012.

Now celebrating its third anniversary this month, HAMOC is the first such museum dedicated to Haitian history, culture and art in the Midwest. Since opening, HAMOC has given a voice to numerous Haitian and Haitian-American artists, providing them a platform to share their creativity, perspectives and insights with the Chicago region.

A: When people think of philanthropy, they often think of giving money, but it’s not about giving money. I define philanthropy as helping humanity, not necessarily through monetary means, but through a general social or educational contribution.

Q: What is your earliest memory of philanthropy?

A: I’ve been a philanthropist since the age of 8. Of course at the age of 8 you can’t give much, but I say this because philanthropy for me has not been about specific generous acts, but more so an intense emotional feeling to do good. I remember experiencing this feeling for the first time when I lived with my grandmother in Haiti.

In Haiti, we have what are called restaveks—children from poor households that believe that families from the city will adopt them and send them to school in return for service work. Organizations are only just now finding that this has evolved into a kind of child slavery. So, when I was with my grandmother who had a restavek working for her, I was dying inside because I wanted to rescue her to send her away to freedom. They would beat her up for the smallest things, something as minor as being late after doing errands to pick up bread.

And then finally, one day her father came to pick her up to take her home. I will never forget the happiness that this little girl felt. I remember sensing her happiness, and because I was feeling all of this joy, I wanted to share it. And since that moment I’ve always wanted to do the right thing.

Q: What inspired you to open up a museum in Chicago?

A: I migrated to the United States from Haiti in 1966, but when I went back to visit in 2000, Haiti was in horrible shape. It was honestly the worst poverty I’ve ever seen in my life. You can describe extreme poverty and you can read about it, but seeing it with your own two eyes is a different story. The same emotional pull that I had after witnessing the abuse of the restavek is the same emotion I felt in 2000. It renewed a sense of despair and frustration.

The poverty that exists in Haiti tends to make the general public in the United States have negative perceptions of Haitian life and culture. After seeing the poverty in Haiti throughout this trip, I was inspired to find a way to shift people’s perceptions to focus on the country’s positive attributes.

I asked myself, how can I contribute to society and give back as a Haitian woman? I knew I could not give these people money, and I certainly couldn’t get them out of Haiti, but maybe there was a way to extract the good out of a bad situation. This lead me to opening up a Haitian museum in the United States for the purposes of projecting a more positive image of Haitian people. So, after this trip in 2000, I started creating a folder of information about my proposed museum.

It is actually not until 12 years later in 2012, following the disastrous earthquake in 2010, that I had the guts to open up the museum to remove all of the negative perceptions out there.

When I was with my grandmother who had a restavek working for her, I was dying inside because I wanted to rescue her to send her away to freedom… And then finally, one day her father came to pick her up to take her home. I remember sensing her happiness, and because I was feeling all of this joy, I wanted to share it. And since that moment I’ve always wanted to do the right thing.

Q: How does the Haitian American Museum make an impact on the Chicago community?

A: We have a lot of programming here that relates to the spreading of philanthropy. One of our missions is to provide programs in the community to spread culture, art and history to Chicagoans in the general area. The second is to help Haitian artists living in Haiti. In other words, we have a museum here in Chicago, but we need to make a connection between Chicago and Haiti in order to make a bigger impact.

This past summer we were able to bring a young Haitian artist, Jean-Yves, from a place in rural Haiti called Camp-Perrin to the Chicago area. Camp-Perrin is very rural, to the point that there’s no electricity. That was a heartbreaking thought for me. However, I’m very happy that, as small as this museum is, we were able to get a visa for a struggling 19-year-old Haitian artist to come to Chicago and share his gift of art. For him to have an exhibit here this past summer was a wonderful awakening for me as the director to be able to provide him exposure to Chicago’s art world. That is the biggest goal we have accomplished in the museum.

Aside from that, HAMOC was also included in Chicago Artist Month through a proposal submitted by a young female Haitian artist from the School of the Art Institute of Chicago named Alexandra Antoine. We participated by contributing three workshops on Haitian art to the Chicago community.

For one of these workshops, a group of students came from a community college all the way up in the suburbs. When I asked them how they chose HAMOC to attend out of all of the other programs Chicago Artist Month offered, they said that they wanted to come to an ethnic museum or a museum that was different. So they pulled out the flyer for Chicago Artist Month, which had over one hundred activities and venues, rounded it down to five, and HAMOC won in their eyes. They liked our mission, they wanted to see it, and they liked what we were doing. It was so gratifying knowing that HAMOC is making a difference in the Chicago community.

Q: You are a philanthropist; what advice would you give to others who also want to give back?

It hasn’t been easy but there’s almost a supernatural force that gives you the strength to do something in your heart. Again, it’s not about money, it’s about the love for humanity and the love to contribute to society—to love to do good and to collaborate with other humans of the same goal. I remember giving a talk at Northern Illinois University, and after I told them my story about opening the museum, I had three to four middle-aged women come up to me and sympathetically telling me that I was success in their eyes.

I think a lot of people out there have great ideas that they file away in a folder, waiting to come out and waiting to do good. If anything this article should inspire this portion of the population to get those folders out and add to humanity.