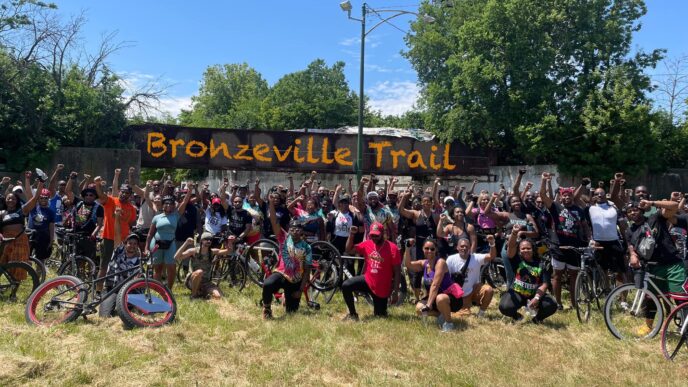 An Early Boost Gives Community Developers a Huge Leg Up

The Chicago Community Trust believes all Chicago neighborhoods are assets, each one worthy of investment. But in the region’s Black and Latinx neighborhoods, community members’ dreams for brick-and-mortar development projects are much more likely to die on the vine, long before plans can even be drawn up. One key reason: inequitable access to capital for pre-development services such as architectural renderings, site assessments, and environmental studies.

The Trust created the Pre-Development Fund to ensure that more transformative, community-driven development projects get the critical early boost they need to make the long journey from vision to reality. Our grants are helping historically disinvested neighborhoods unlock opportunities to build beautiful new spaces, create jobs and wealth, increase safety, and thrive.

Supporting Our Neighbors’ Dreams for Growth and Resilience

Catalytic real estate development projects aren’t just critical to addressing the chronic disinvestment in Black and Latinx communities—they’re also essential to ensuring our region’s economic recovery from the COVID-19 crisis. Since the beginning of the pandemic, the Pre-Development Fund has made over $3 million in grants to 38 projects.

The Pre-Development Fund is unique because it is relatively rare for foundations to support for-profit projects and to provide no-cost capital at the pre-development stage, often because these projects are considered risky. But grants from the Pre-Development Fund bring a welcome degree of certainty to community-centered projects, help leverage additional sources of funding, and allow emerging developers to compete with more established and well-resourced regional and national developers.

In addition to funding for pre-development services, the Pre-Development Fund also helps build the capacity of Black and Latinx developers. Grant recipients are eligible for technical assistance from Community Desk Chicago or S. B. Friedman, which serve as conduits between the projects and the resources and capital necessary to bring them to reality.

1022 Food Hub
1022 Food Hub is a project to convert an abandoned two-story building at 1022 West 63rd Street in Englewood into a 6,000 square-foot shared restaurant space and training ground for food entrepreneurs. Prospective tenants include Ellie’s Urban Grille, a family-style bar and grill; Pass the Peas, a Southern comfort restaurant; and Englewood Kitchen, a shared workspace for up to five food entrepreneurs.

The food hub is being developed by E.G. Woode, a socially minded small business and real estate development firm, in partnership with Teamwork Englewood. “Without the Pre-Development Grant, I’m not sure we would have been able to create the designs and budgets that we needed to win two critical grants from the City of Chicago and the State of Illinois to move the project forward,” said Justin Essig, who manages operations for E.G. Woode.

In addition to helping entrepreneurs build multi-generational wealth and creating well-paying local jobs, the developers see 1022 Food Hub as part of a longer-term revitalization strategy for Englewood. “We want to acquire other buildings in the area and put in more like-minded businesses so we can revitalize a whole corridor instead of a single building. That will create a clustering effect and help turn Englewood into a destination,” says Essig.

The Bronzeville Trail
The Bronzeville Trail is a community-driven project to convert the abandoned Kenwood ‘L’ Line to an elevated linear park and trail that will celebrate the deep historical roots of the Bronzeville community and create new opportunities for recreation, exercise, and gathering. The Pre-Development Fund grant supported site due diligence, architectural fees, and community engagement around the trail effort.

The project will create nearly two miles of multi-use trail from State Street to the 41st Street pedestrian bridge, providing a direct connection to the Lakefront Trail. Two historical projects are also planned: one commemorating the Kenwood Line’s historic role connecting Black communities to the Union Stockyards, and another honoring Black cycling champion Marshall Walter “Major” Taylor, who lived in Bronzeville prior to his death in 1932.

Investing in the West Side
Last June, the Pre-Development Fund invested in two catalytic projects on Chicago’s West Side:  the renovation of a 12,000 square-foot Humboldt Park building into a restaurant and cultural center, and the rehabilitation of a historic corner building in Austin into Soul City Studios.

The Soul City Corridor is a new public-private partnership that is using tax increment financing to envision and build a new westerly gateway for Chicago in the Austin neighborhood. Situated at one of the corridor’s flagship intersections, Soul City Studios will support the partnership’s vision by housing a full-service recording and podcast studio, a vegan bakery, an art studio, and one unit of housing.

The Pre-Development Fund Grant will cover early-stage costs such as architectural services and legal fees, allowing the project to leverage a previous investment of $250,000 from the City of Chicago’s Neighborhood Opportunity Fund. With its combined focus on arts, entertainment, and healthy lifestyles, Soul City Studios will feed into Austin’s broader revitalization strategy while embodying and promoting the community’s proud culture and values.

Chicago Prize Partnership
The Trust also partners with the Pritzker Traubert Foundation, which recognizes transformational, community-led development initiatives with the $10 million Chicago Prize award. In addition to the six teams nominated to compete for the 2022 Chicago Prize, the Foundation has designated four initiatives on the South and West sides as Chicago Prize honorees. Each honoree will receive $100,000 plus access to technical assistance through the Pre-Development Fund as they continue to bring their plans to life.

To learn more about the Pre-Development Fund, please visit our grant opportunity overview.