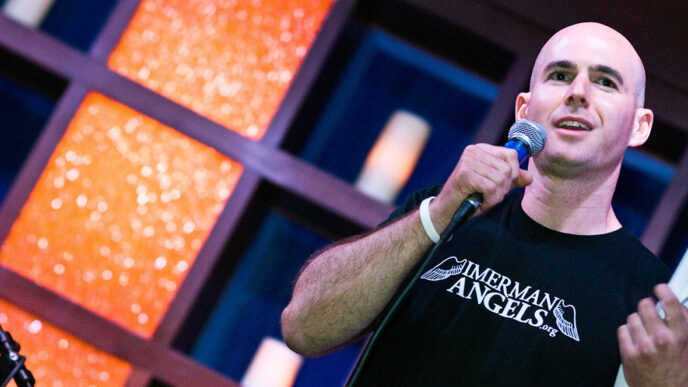 An Army of ‘Angels,’ Making Sure No One Fights Cancer Alone

In 2001, Jonny Imerman was 26, living in Detroit, earning an MBA and working in commercial real estate. He soon found out he had cancer. He beat it—and then two years later, doctors found four tumors behind his kidneys.

As Imerman went through treatment, he noticed there were very few young survivors to connect with, so doctors would send him in to talk to patients. “The connection between those who’ve been there and those who’ve started is strong. A lot of people fight this alone.”

[pullquote]“The happiest people I know are the ones who are constantly giving”: @JonnyImerman of cancer support @ImermanAngels[/pullquote]

By the summer of 2006, Imerman had recruited 7,000 volunteer survivors and caregivers, in places as far away as Chile, Tokyo and Togo. He and his team used Skype to train and learn about volunteers’ own cancer stories, so that when “someone calls with the same cancer in California and we connect the dots. People need to connect with those who understand.”

Nine years later, with an 11-inch incision, Imerman has become a leader in the cancer support movement, bringing patients and survivors together. With a full-time staff of fourteen, Imerman Angels provides “personalized connections that enable one-on-one support among cancer fighters, survivors and caregivers.”

Imerman’s Angels find volunteers and patients through partners like the American Cancer Society, LiveStrong, Leukemia Lymphoma Society, among other cancer groups, as well as hospitals, doctors, social workers and other medical professionals. Last year, the organization helped 2,600 families in over sixty countries; this year they’re on pace to help 3,000 to 4,000.

“It’s always about the quality of the match: bringing together the right two people,” Imerman says. “You have to do it quickly because it takes a lot to reach out for help. You’re nervous, scared; and you have to start quickly before they begin treatment or surgery, or radiation or chemo. There are so many new things: the question marks, the newness and the experience.”

“We ease anxiety and shed light on the road ahead. Fortunately, there are so many good human beings in the world that just want to give back.”

Q: What inspires or motivates you to give/do good for others?

A: I love human beings. It’s all about the people and ideas, and then when there are ideas that help people, that’s the best. People like Rob Lentz [of Project Onward] get me fired up. Hanging out at 1871 inspires me to no end. It inspires me the most when it does some social good along the way, like TOMS Shoes—stuff that’s changing the world. People and ideas inspire me the most.

Q: How do you think giving creates stronger communities?

A: I think giving is one of the most innately human things about all of us. If you look at our survivors—our angels—they give for zero regard. They don’t get any sort of gain other than selflessly giving their story, helping others cross the finish line and helping them get their life back. The happiest people I know are the ones who are constantly giving and sharing.

It’s the biggest part of my joy and happiness that I’m adding value to the world. They’ll tell you at the end, ‘I’m at such a better place now. I hear your story, your voice, it inspires me.’ When you get that—and we all get that as survivors—to me that’s one of the greatest feelings. There’s lots of ways to give back. Sometimes it’s just sharing your story.”

Q. You are a philanthropist; what advice do you have for others who want to do good?

A: Advice was given to me by an old mentor of mine who said, “Find a way to do what you love every day. Keep throwing yourself into a sphere that allows you to do it.” He had a radio show, and his last question for guests would always be, “What is your advice for young listeners?” Everyone says the same thing: find what you love. Be persistent; find a way to do it every day. That’s when I made the decision to do this full time, and that was nine years ago. I would give that advice to young people, especially. You’ve got the ability to fail and make mistakes. You’re in your twenties with the fewest attachments.

When you find what you love, it’s really just the happiest life, if you just trust that eventually it’s going to work. A job that doesn’t add value or give something to people in a hard place, if it doesn’t have some element of social good, I can’t get excited about it.

The happiest people are those that work for or create companies that have a massive social good part of it; it’s not always about simply selling a product. You never want to work to make the world a worse place. Volunteer, get involved. You’ll make the best friends; you’ll meet the best people who want to be a part of something that’s positive.

Another thing I’ve learned in life is don’t think you have to figure it all out your first step. I had no clue how to start a company or register a nonprofit. You just have to have the courage to jump and figure it out along the way. Our team, we had no idea what we were doing, but we just kept doing it. We had faith. We knew we were helping people. It works; let’s just keep doing it. It’s not about being smart—it’s about being passionate, dedicated and persistent.