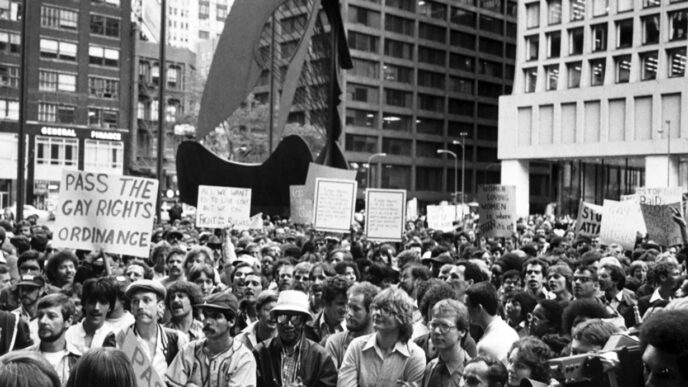 An Ally for Chicago’s LGBT Community

For the creators of The LGBT Community Fund at The Chicago Community Trust, the goal was to come together so that organizations serving the LGBT community would be more sustainable and enjoy more diverse sources of philanthropic funding and volunteer leadership. Playing a leading role in this effort was The Elizabeth Morse Charitable Trust.

The Elizabeth Morse Charitable Trust (EMCT) and its co-trustees, JPMorgan Chase Bank, N.A. and James L. Alexander, have been at the forefront of practicing values-based grantmaking seeking to realize EMCT’s five core tenets. One of those tenets is promoting, instilling and/or reflecting the values of individual and/or organizational thrift, humility, industry, self-sacrifice and/or self-sufficiency.

That tenet has been consistently realized through EMCT’s substantial and long-term support of the LGBT community in Chicago, particularly documenting and highlighting the lives of those pioneers in the LGBT community who sacrificed so much to realize their own individuality and freedom, which ultimately led to greater freedom for those in The LGBT Community today.

This cartoon of Chicago’s Levee District by John McCutcheon shows same-sex pairs and debauchery in Chicago’s vice district. Image from the Out in Chicago exhibit of the Chicago History Museum

One example is The Elizabeth Morse Charitable Trust’s lead sponsorship of the Out in Chicago exhibit at the Chicago History Museum, which ran from May 2011 to March 2012. In all, 125,000 people, including 5,000 students and teachers, visited the exhibition. As well as shedding new light on many of the artifacts from the museum’s collections, the show incorporated objects from numerous members of The LGBT community.