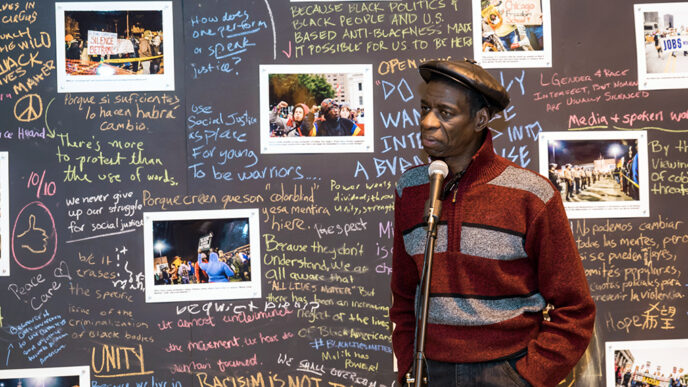 Darrell Cannon at an event honoring survivors of Chicago Police torture in February 2016. Image by Sarah-Ji on Flickr

On May 10, as the sun fell, 13 people sat down at the Arts Incubator on East Garfield Boulevard to talk about the trauma of police violence. Together they acknowledged the torture committed by members of Chicago’s police force, committed to the movement for justice, and explored what it will take for survivors and communities to heal.

This gathering was part of On the Table 2016, a day that saw more than 55,000 people all around the Chicago region engage in intimate, rich and necessary conversations about their shared community.

The guests used paper and pens of various colors to write about their losses, and about the steps they hope to see to help move toward restoration. They took up scissors to cut squares, hearts, and free-form shapes, letting creative expression advance the healing.

Reparations Won!, a group formed in the wake of the historic City of Chicago ordinance that provided compensation, restitution and rehabilitation to men who were subjected to torture by former Chicago Police Commander Jon Burge and detectives under his command, convened the conversation.

The group is in the process of planning for a community center on the South Side that will serve survivors and their families, said Carla Meyer, a Reparations Won! steering committee member.

By sheer chance, another Chicago Police torture survivor joined in the conversation: not a guest, but the security guard on duty that evening. After 25 years in various prisons around the state, he was released last October.

Between 1972 and 1991, more than 100 people, predominantly African-American men were tortured. The survivors, their families, organizers and lawyers in Chicago spent more than 30 years seeking justice and reparations for the victims. On May 6, 2015, the Chicago City Council approved a $5.5 million reparations fund for victims and later issued a formal apology.

One of those survivors, Darrell Cannon, addressed the group on this evening. Tall, lean, dressed in a dark suit and speaking softly, he recalled his forced confession, and the 24 years in prison that followed.

Cannon’s release came in 2007, after a review board determined that tainted evidence was used to convict him.

“The glass is half full,” he said. “There are those still in prison. We have a lot yet to do.”

Cannon spoke about the violation of black men at the hands of the justice system, and asked those present—many of whom had worked on the reparations movement—to continue their support. Cannon explained that he continues to speak out “to make whatever difference I can.”

Before Cannon took the floor, the On the Table guests viewed a video by the Chicago Torture Justice Memorials Project. This initiative seeks justice for the torture survivors through teach-ins, roundtables and other public events, and is working on a monument to memorialize the Chicago Police torture cases. Cannon is featured in the video.

The evening’s host was Camesha Jones, project coordinator for Reparations Won! and a member of its steering committee. Jones envisioned the gathering as an interactive experience, providing art supplies and a time for free expression.

“Reparations is not just about money,” Jones emphasized. “It’s about support so people can live full and happy lives.”

Asking everyone to contribute to a “community canvas,” Jones set up three poster boards which she had labeled with questions:

Jones, a masters degree candidate in social work at the University of Chicago, explained that she was after ideas, solutions and recommendations.

“I was trying to move it past the conversation,” she said. “How can we repair the harm and use our own ideas as a community to further the fight for justice so torture doesn’t happen again?”

By sheer chance, another Chicago Police torture survivor joined in the conversation: not a guest, but the security guard on duty that evening.

Shawn Whirl had his own story of being falsely accused and wrongfully incarcerated. After 25 years in various prisons around the state, he was released last October.

He’s not bitter, Whirl said. But he “still carries the wounds now.”