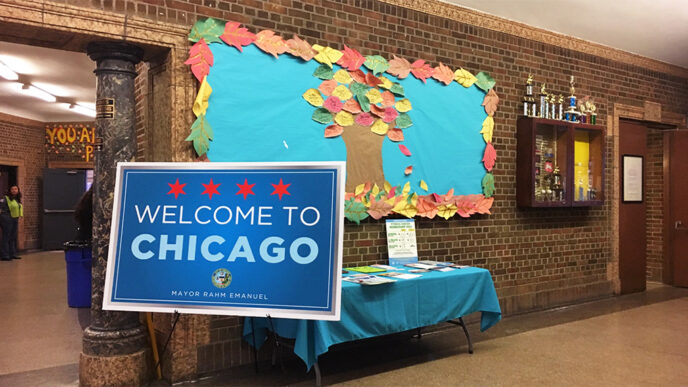 Since opening in November

Eight months after Hurricane Maria swept across Puerto Rico, a new Harvard University study suggests that the death toll may be more than 4,600—more than 70 times the official figure. While the exact count may never be known, the island’s losses have been devastating, and thousands more residents continue to leave for the mainland U.S.

At its most recent meeting, the Philanthropy Council hosted a conversation about Chicago’s civic response to Puerto Ricans arriving in the wake of the natural disaster.

Gus Wilhelmy, co-founder of Safer Foundation and the founder of the Philanthropy Council, began the meeting by reflecting on the essential role of philanthropy in disaster recovery.

“Not much money was allocated to the island after the terrible hurricane devastated the island. When, for various reasons, government doesn’t take over, philanthropy has to,” Wilhelmy said. “Major donors, trusts, foundations, corporations must step up. Philanthropists must be righteous in dealing with impoverished citizens. The philanthropic dollar must be used addressing the needs of the U.S. citizens.”

According to a CNN report, 179,000 airline passengers flew from Puerto Rico to the mainland United States between September and November 2017. 11,500 new Puerto Rican students enrolled in Florida schools. 6,600 changes of address were filed from Puerto Rico to states within the U.S., including Alaska and Hawaii.

Sandra Aponte explained that while there is no reliable count of individuals who have left, these figures are ways of trying to understand the migration and what it might mean for different areas of the country.

“This is where they are reestablishing or are staying temporarily until things get better on the island,” Aponte said. “It’s no surprise [that many have settled in] Florida. It’s the closest state and environmentally is a lot like Puerto Rico. One of the things that draws migration is the existence of established Puerto Rican communities, and we see some of that in Chicago.”

At a recent meeting of the Philanthropy Council, staff members at Chicago nonprofits and funding organizations discussed the community’s response to support evacuees from Puerto Rico arriving after Hurricane Maria.

Before the storm, Chicago was home to more than 100,000 Puerto Ricans—the largest community in the Midwest. While the CNN report showed 267 individuals relocating to Illinois since Hurricane Maria, relief agencies in Chicago report working with many times that number of new arrivals.

When Hurricane Maria struck, the Puerto Rican Agenda—an organization of local Puerto Rican leaders that seek to influence policy for the advancement of the community in Chicago—took a leadership role in receiving and distributing donated goods. And like many organizations, they also facilitated an outpouring of financial contributions from residents throughout the city.

As Torres-Kortright of the Segundo Ruiz Belvis Cultural Center explained, “We are a very small team. Instead of doing all the work we were doing strategically, we would have been in a warehouse sorting all kinds of materials and turning down 90 percent of the things people were bringing. It was important to focus on the monetary donations so we could turn that into immediate action.”

“The first fundraiser raised $56,000 in one night, immediately after the hurricane,” Torres-Kortright said. “The National Museum of Puerto Rican Arts & Culture raised $26,000 with an auction. A lot of people came forward. Thanks to the Mayor and [U.S. Representative] Luis Gutierrez, we had a plane in Puerto Rico on Monday—less than a week after the hurricane—and then a second and third plane.”

“The dominant attitude in America is that Puerto Ricans are not citizens. That’s false. Puerto Ricans are U.S. citizens and need help… When, for various reasons, government doesn’t take over, philanthropy has to. Major donors, trusts, foundations, corporations must step up. Philanthropists must be righteous in dealing with impoverished citizens.”

“Shortly after Maria, the Mayor called a meeting among city and community agencies to coordinate efforts to come up with a comprehensive strategy to welcome refugees,” Pacione-Zayas said. “He wanted to roll out the welcome mat. He wanted Chicago to be the model for the rest of the country.”

The City’s Office of Emergency Management organized three days of planning meetings to see what was already being done to help the evacuees and what still needed to be done. They invited “different stakeholders to the table to leverage resources, because we knew at the outset that there might not be any federal support. It was going to be looking in your own pocketbooks and budgets to make this work,” Pacione-Zayas said.

In November a Hurricane Resource Center opened in the Humboldt Park Field House, where representatives from city, county, state and federal offices and various social service agencies connected newly arriving individuals and families with housing, food, clothing and mental and physical health services. To date, approximately 2,000 people have been served by the center.

Alderman Roberto Maldonado of the 26th Ward has hosted a monthly jobs fair at the relief center, drawing thirty to fifty employers. Upwardly Global, an organization that works with immigrant and refugee populations, provides services at the job fairs like translating resumes, preparing for interviews and understanding mainland work customs.

Pacione-Zayas described it as “a one-stop shop. You could get your state ID card or driver’s license, enroll your kids in school, get child care on-site so that individuals looking for work had a place that would take care of them. Now it’s down to one day a week, but it has been open far longer than was expected.”

“Now, six months later, aftershock is setting in,” Pacione-Zayas said. “This is where mental health is going to be absolutely critical. We’ve seen a spike in suicides on the island at this point. I was just on the island and the Red Cross said this has been the longest recovery in their history.”

Sandra Aponte, a program officer at The Chicago Community Trust, explained that the foundation was spurred by the hurricane relief effort to create an official disaster response policy. “All these logistics that are in place, the policy work, the education of our community and people who want to give: there’s going to be a long-term gain,” Aponte said.

The Puerto Rican Agenda has been working with city, state and federal agencies to find ways to ease the housing shortage. For short-term relief, Senator Durbin negotiated to enable a person who has a HUD voucher for subsidized housing to use it in Chicago. As a long-term strategy, Durbin is exploring tax credits for community development corporations to build additional affordable housing.

“Chicago has an affordable housing crisis, and this is only exacerbating the issue,” Pacione-Zayas said. “We don’t want Puerto Ricans to be pitted against other communities that are also vying for affordable housing options. While this is an emergency and a crisis situation, it should not be on the heels and backs of those who are waiting as well. There needs to be room for everyone to get a roof and shelter over their head.”

Aponte and Ibañez both acknowledged that foundations and other funders each have their own defined priorities and specific schedules for grant making—none of which are likely to coincide with disasters. Providing rapid funding to relief organizations challenges program officers to be creative and flexible. As Ibañez said, “You can never plan for a hurricane. You can never plan for a natural disaster. So it’s never going to fit in your calendar.”

Aponte explained that The Chicago Community Trust became involved when its then-CEO Terry Mazany suggested to the incoming CEO, Dr. Helene Gayle, that the Trust play a role in disaster relief and in supporting the Puerto Rican community. Aponte was the only representative from a foundation to attend the City’s early meetings, so she shared information with other funders.

“We gave out two grants as part of our initial response,” Aponte explained. “One was to the Puerto Rican Agenda for local planning and coordination for resettling and relief efforts, and for emergency grants as they saw fit. The other was to the Puerto Rico Community Foundation in Puerto Rico”—a community foundation located on and established to serve the island, just as the Trust is the Chicago region’s community foundation.

“Chicago has an affordable housing crisis. While this is an emergency and a crisis situation, it should not be on the heels and backs of those who are waiting as well. There needs to be room for everyone to get a roof and shelter over their head.”

According to Ibañez, the Woods Fund supports “organizations who lift up those who are most impacted by racism and poverty, to be the leader of change in the community.”

“As an organization devoted to racial equity, we know historically that communities of color, like Puerto Ricans, have experienced racism, and do on a regular basis. The federal response to the hurricane made it very clear that they could not be counted on to respond. We knew we had to be there,” Ibañez said.

Torres-Kortright praised the flexibility and understanding the Trust and the Woods Fund showed, and said that their support helped the cultural center continue its mission. “We are a cultural center, so it’s a place where people go when they need to feel a connection with the island. We’re drawing attention to what’s happening on the island, and giving work to Puerto Rican artists who are coming here.”

Looking ahead, Aponte said, “This is going to happen again. All these logistics that are in place, the policy work, the education of our community and people who want to give: there’s going to be a long-term gain.”