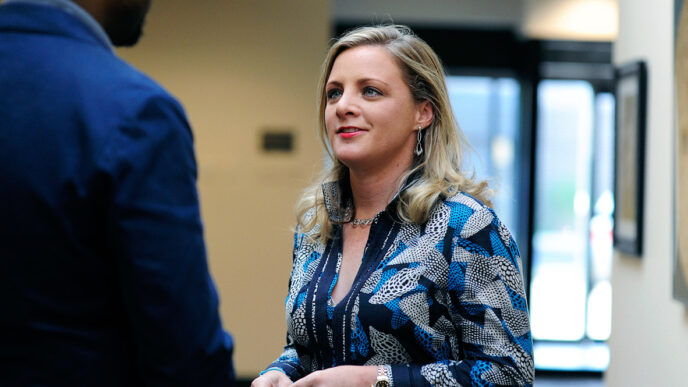 After a Tragic Loss, a Journalist Helps Us Reckon with Death

WGN-TV reporter Randi Belisomo is on a mission to help her fellow Chicagoans learn to think in concrete terms about a very difficult topic—namely, that we are all going to die. That’s not the end of the conversation for Belisomo, though. It’s just the beginning.

“We need to try to live the best life possible until we’re not living anymore,” she says.

[pullquote]After a tragic loss, a journalist discovers her “life’s work”: helping others come to terms with death[/pullquote]

Belisomo co-founded Life Matters Media as a forum for talking about end-of-life issues, both for terminally ill people and their caregivers, and for the rest of us as well.

Belisomo came to her “life’s work,” as she calls it, after the death of her husband of three years, Carlos Hernandez Gomez, a dashing reporter for CLTV where Belisomo began her professional journalism career. Hernandez was diagnosed with advanced colon cancer in 2009 and began an aggressive treatment regimen that included surgeries and chemotherapy. But 13 months later, he suddenly suffered a pulmonary embolism and died.

She was “so surprised,” Belisomo recalls—blindsided by an event that required her to decide not what steps to take to keep her husband alive, but when to remove him from life support.

“We were concentrating on what came next medically,” she says. “No one addressed the elephant in the room, which was that Carlos was going to die of this disease.”

Belisomo doesn’t recall anyone in their circle discussing anything other than a full-bore assault on Hernandez’s illness.

As for Hernandez himself, “He didn’t want to withdraw hope. He didn’t want to hurt me, or give up,” she says. “That had to be isolating. He had a chemotherapy appointment the day after he died that I had intended for him to keep.”

If she could change anything about those last months, it would be “how we spent our time,” Belisomo says. Because she didn’t absorb the understanding that Hernandez’s disease was unequivocally terminal, “we were robbed of the opportunity to spend our time in more meaningful ways.”

Belisomo took time off work to deal with the shock and grief that followed Hernandez’s death. She occasionally ran into his oncologist, Mary Mulcahy MD, at her gym. One day, Belisomo asked Mulcahy, “Why didn’t you ever tell me Carlos was dying?” Mulcahy protested that she had. Belisomo replied, “You said eventually he was going to die. You didn’t say, ‘Get your act together and do what you need to do.’”

Belisomo says now, “Not everybody wants to live longer. Some people just want to live better.”

One day Belisomo asked her husband’s oncologist, “Why didn’t you ever tell me Carlos was dying?” The doctor protested that she had. Belisomo replied, “You said eventually he was going to die. You didn’t say, ‘Get your act together and do what you need to do.’”

Together, Belisomo and Mulcahy resolved to join forces to do what they could to make that easier, in a culture that encourages people to push away thoughts of death. The result was Life Matters Media. The nonprofit offers a website and an educational program with ongoing events at senior centers, public libraries and other venues.

Eventually, Belisomo wants Life Matters Media to serve as a substantial community resource for getting people thinking in an effectual way about dying, putting their affairs in order to avoid a rush at the end (or worse, leaving no instructions at all)—and telling their loved ones in no uncertain terms how they want to go out of this life.

Belisomo puts her own time behind her talk: She sits on the board of the Chicago End-of-Life Care Coalition and the Illinois Task Force for the Physician Orders for Life Sustaining Treatment. She is also studying for a doctorate in bioethics and health care policy.

“Things happen for a reason,” Belisomo says. “I found out about a big issue early in my life, and I’m in a position to work to address it. Sometimes the best gift you can give someone is to help them make the best of a bad situation.”