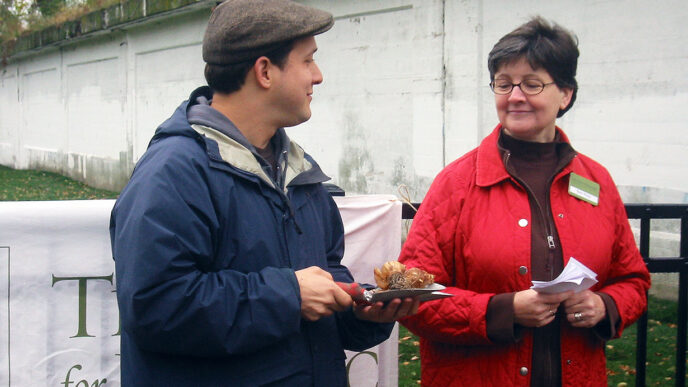 Ben Helphand knows that when it comes to communities, it’s the little things that add up to the big picture. He says, “Small decisions make a big difference.”

As co-founder of Friends of the Bloomingdale Trail, a community-based advocacy group instrumental in building support for The 606, Ben is enjoying the realization of a ten-year collaboration between government and community groups to create the unique green space that now connects north-side neighborhoods and people. The long process was made up of many individual contributions within the community itself.

“Every single tiny public meeting about the trail would draw about ten times the expected turnout,” he says about the planning stages. This kind of community participation made it possible to collect over 600 individual surveys from residents to present to city planners to demonstrate support for the park.

Ben discovered the Bloomingdale Trail for himself while living in Wicker Park in 2001, and fell in love with the space that reminded him of the landscape of his native Oregon. In time he came to be “not just interested in it as a trail, but as a separate, unique elevated space that connects the city’s people and communities. It’s what’s so great about parks in this city.”

The desire to connect people and make them part of the process is at the heart of Ben’s approach. He approaches projects asking, “How do you transform something using those sparks of origin to develop a sustained interest, and a sense of exploration and discovery? When it’s done well, everyone gets to share in that sense of sacred space.”

As Executive Director of NeighborSpace, Ben fosters community involvement, collaboration, and philanthropy through every project. He focuses on community stewardship and organic approaches to involving everyone, which has “been a great lesson about everyone giving what they are able to, and filling different roles,” Ben says.

It was this approach to leadership which earned him The Chicago Community Trust Fellowship in 2012, in recognition of his contributions to Chicago’s nonprofit sector.

According to Ben, it takes “a merger of organic community efforts and skilled city planners to make a project happen. We must recognize the need for real autonomy in volunteer organization, and provide opportunities for a different kind of stewardship that depends on residents.”

Ben credits his family for informing his perspective on community. His father was a landscape historian and his mother was a social worker. Both imparted a value and respect for the abilities of people who make up the community. His father’s love of gardens, city landscapes and histories “always had them visiting the places he was interested in,” Ben says. His mother always knew people everywhere they went, and provided insight into how real politics work, teaching Ben that “communities are living things.”

That influence is still apparent when Ben talks about seeing The 606 open in June. “When you have a gut feeling that you then act on, that’s what transforms the community into what we see now.”