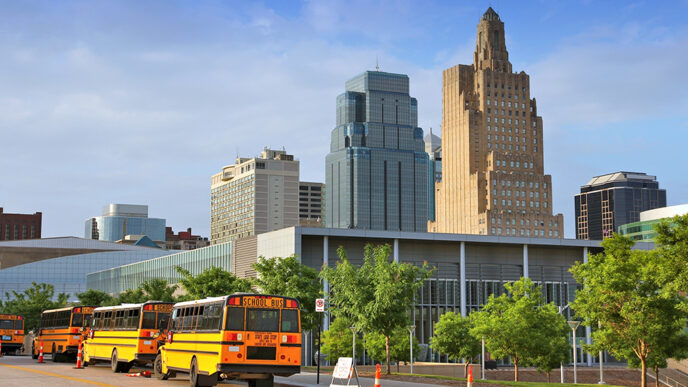 How can communities access full employment, fair credit, early childhood education and an increased health and life expectancy in the American heartland?

These were the challenges that inspired the Moral Economy Summit, a two-day conference held at Kansas City’s Rockhurst University earlier this summer.

The Trust’s Rachel Pate and Maritza Bandera attended the Summit to explore how citizenship, race and power affect economic systems, participate in the mealtime conversation inspired by On the Table and to experience how other cities are adopting the On the Table model to address their community concerns.

Maritza Bandera: One thing we learned is that Kansas City is now a leading city when it comes to parental leave. They are among the first municipalities in the nation to implement a paid parental leave policy. City employees are getting six weeks of parental leave. When they passed that legislation it was a big win for the city. The mayor of the city challenged the private sector as well to do it.

Predatory lending: that’s also something that we don’t talk about as much. But as a leading city for predatory lending, Kansas City is supporting national legislation to stop that. Payday loans businesses primarily advertise to lower-income households.

MB: We heard a powerful story of a man who lost his job—so he started by taking out a payday loan. Then when that ran out he took out another one. It became a vicious cycle because then he had all this debt.

Mayor Sly James, at left, receives an award from Summit organizers Communities Creating Opportunity to recognize his achievement in passing a paid parental leave policy for City employees that has made Kansas City a national leader in the field. Photo by Daniel Boothe | Flatland.

RP: That was a very powerful story. He was also there at the conference. He’s a funny, happy guy, everybody knows him. It just connected you to the subject.

MB: When we talk about race and equity here in Chicago, we might talk automatically about safety, or education, because those are two of the most pressing issues in our city. It was interesting going to another city where they talked about racial equity through an economic lens.

RP: There were also several day care teachers there talking about wages. The actual people who are making $7.25 right now. That hit me hard: that those people that were actually in the room taking part in the conversation, as they should.

MB: That’s what I really enjoyed about the summit: these are just people that are making a difference. Not necessarily executive directors or someone with a big job title, but they’re on the ground pushing forward these policies, and organizing people, and empowering them that their voice and their need matters.

That was refreshing, because oftentimes when we go to these conferences, we’re just so used to hearing from the CEO or the expert—assuming that the people that are the ones on the ground are not experts. They are, right? Because this is what they do.

If we continue to live in this system, where the rich get richer and the poor get poorer, and the middle class continues to disappear from our economic structure, the system’s going to break. People forget that it’s in everyone’s self-interest that we’re all doing better.

RP: The conference itself was $15. A little bit of food, no frills, and all that mattered was the conversations that were being had. That was so refreshing. A man was there who does janitorial work, you don’t see that at conferences often. I really respect the [summit’s] organizers because they made it so that all kinds of people could show up and actually be heard.

MB: You’ve probably gone to a lot of conferences where you’re paying $600 to talk about social justice and equity. Then you think, “This is $600. How is this equitable, when there’s a lot of people that aren’t going to be able to afford that?”

RP: During the On the Table conversation at lunch, one woman gave her story of how she lost her house. Her landlord wouldn’t fix anything in her house. She couldn’t afford to complain about it. There was a big hole in her ceiling and water was dripping down.

MB: She has a disability, and she lives where she lives because that’s all she can afford.

Is she better off where she’s at, in spite of the big hole in the roof and water seeping through every time it rains? If you continue to report your landlord, then let’s say the housing authorities come. They shut it down, it’s not inhabitable—then all of a sudden she’s homeless.

RP: She was just telling her story. Instead of abstract PowerPoints on a topic, she was right there. She was crying, she was emotional. She was having lunch with us. This was someone’s side of the story.

RP: One of the questions the moderators posed was, “We want you to talk about what a moral economy is. Is our economy moral?”

For me, a moral economy is our economy operating in a way where everyone has a chance to succeed. When it comes to people who are marginalized and disadvantaged, it’s an immoral economy. Especially for people who don’t have an education. How are they ever supposed to get to a level where they can compete, or be as successful?

One woman gave her story of how she lost her house. Instead of abstract PowerPoints on a topic, she was right there. She was crying, she was emotional. She was having lunch with us. This was someone’s side of the story.

MB: Eric Liu from Citizen University was the keynote speaker. One of the things he talked about was our human nature to be selfish. We cannot expect for all humans to become altruist, but we can look at how we look and define self-interest.

We need to get to that point where it’s in my self-interest that you’re doing better. Because if we continue to live in this system, where the rich get richer and the poor get poorer, and the middle class continues to disappear from our economic structure, the system’s going to break. People forget that it’s in everyone’s self-interest that we’re all doing better.

MB: That’s why we’re having so many of the challenges that we’re being faced with today—because the system’s starting to break.

A resounding theme throughout the conference was the importance of learning how to tell your story. Because we all came from somewhere. At one point or another, we all have our personal struggle. But we forget the power of that.

That’s what stuck with me: learning how to tell your story, and not being ashamed of it.