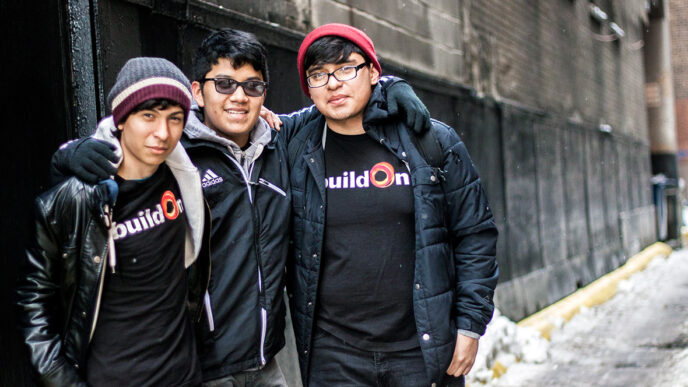 “If you can’t feed a hundred people,” Mother Teresa once said, “then feed just one.”

In feeding just one homeless man, 17-year-old Carlos Leon, a student at Carl Schurz High School in Irving Park, found a way to make a greater effect in his community than he ever knew was possible.

Part of a cohort of students in the buildOn program—a national nonprofit whose mission is to break the cycle of poverty and illiteracy through education and intensive community service—Leon learned how he can make an difference through service.

“I used to be very pessimistic about whether I could ever have an impact. Being so young I didn’t think I had the knowledge or the power to change the problems I saw in my neighborhood.”

“My school, Schurz High School, had a downward spiraling reputation,” Leon explains. “There was gang activity. Students were apathetic and had low expectations for themselves. Overall, there was just a lot of negative energy and I didn’t think I could do anything about it.”

But being part of buildOn provided Leon with an “enormous amount of positivity.” He saw other students in the program making progress academically—and “making a difference in Chicago as well.”

Service projects helped Leon begin to see the problem of homelessness in a different light. Leon says, “Through buildOn, I learned about what life is like as a homeless teen. I came to understand how difficult it is for homeless people to find a shelter for the night. I served meals to the homeless population and I learned that many families, not just individuals, depend on these meals.”

Students cut and hand-stitch fleece to make winter hats. After a homeless man asked Carlos Leon for change, the 17-year-old took him to lunch instead, and listened to learn what it takes to survive outside. Those essentials—socks, a warm hat—inspired Leon to create care packages to distribute to homeless men and women in Chicago’s Loop.

Armed with that understanding, Leon made choice to do something different when a homeless man asked him for change one day.

“I thought back to all I had learned through buildOn, and I decided to take him to lunch instead. It was a simple meal at McDonald’s, but the man was surprised and grateful that I asked.”

While most individuals pass by homeless people everyday without stopping, Leon’s generosity—a warm meal and a simple conversation—led him on a path to make an even bigger impact.

“As we ate, the man told me how harsh life is when you have nothing. He told me how he lost his job at a factory. He said he never knew how to manage money, so he couldn’t afford to pay his bills and then he lost his home. He told me how he sleeps in the streets downtown and how blankets, socks and especially hats are a necessity, because that’s what really keeps you warm at night.”

Following lunch, Leon decided to start a service project to provide homeless people downtown with the things that they need: the things his lunch companion listed out as necessity for life on the streets.

Carlos Leon inspired his fellow students in the BuildOn program to help him create his care packages. Each bagged lunch—sandwich, grapes, cookies, juice box—is accompanied by a greeting card the students make and illustrate by hand.

Together with Francisco Ramirez, buildOn’s Illinois regional manager, and the other buildOn students at Schurz High School, Leon put his ideas into action.

“We got together and made care packages for the homeless. The care packages included a sandwich, a juice box, a bag with cookies and grapes, a handmade greeting card, and a warm winter hat—just like the man asked for. Then we walked and distributed the care packages throughout downtown Chicago.”

The impact of that service project resonated deeply with Leon and served as a practical reminder of how we all have the power to act in service of others.

“It felt incredible knowing that I helped make this project happen. Projects like this one have shaped my idea of how we can all change the world!”