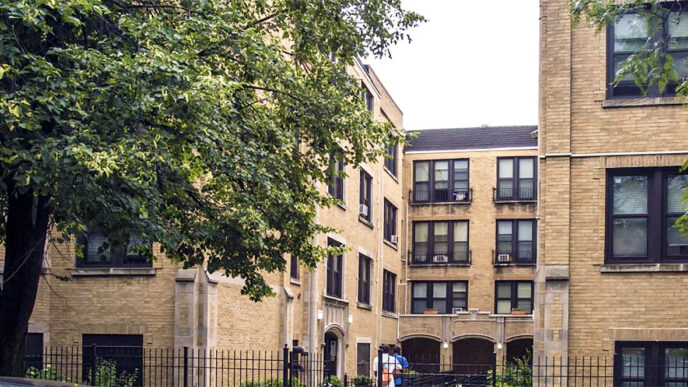 But among the droves of hipsters and incoming crowds sits a housing cooperative where rent is based on family income, and residents take ownership of the property.

The Trust’s grant recipient and community partner Chicago Community Loan Fund recently gave us a look inside their work with the Woolman-Washington Cooperative Apartments, which provide a scarce and much-needed affordable living option for families in Chicago’s Wicker Park neighborhood. We’re pleased to share this story of their success.

Woolman-Washington Cooperative Apartments is a federally subsidized housing model, working to establish long-term affordability regardless of the neighborhood’s escalating property values. Most of the tenants meet HUD income guidelines.

But before it was Woolman-Washington, the building known as Pierce North Apartments was targeted for closure in the early 1980s. Wicker Park was a “tough” neighborhood then and the local neighborhood association was interested in removing families they deemed part of the problem. During that time two multi-family unit buildings across the street from Woolman-Washington were vacated completely as part of the larger community development strategy of the Wicker Park Association. The removal of tenants from multi-family properties in Wicker Park was quickly resulting in gentrification.

The Woolman-Washington Cooperative formed in the 1980s, when the building was targeted by a neighborhood association paving the way for gentrification. Marion Turner, right, was the first president of the cooperative’s board of directors; today granddaughter Kimberly Turner (second from left) follows in her footsteps.

Marion Turner lived in the Pierce North Apartments at the time. Turner and the other founding members of the cooperative organized a group of residents with the fierce determination to stay put. They met with Midwest Friends Housing Corporation, whose purpose was to establish a housing project which would be well-managed by the residents and provide housing at a cooperative cost speculative profit. Midwest agreed to convey title to the purchaser free of charge, and Woolman Washington Cooperative Apartments, Inc. was organized as an Illinois nonprofit corporation.

The property was converted into a 51-unit cooperative, where residents were empowered to manage the facility and hire their own staff. Marion Turner became one of the first board members, whose first act was naming the building in honor of the antislavery pioneer John Woolman, who helped launch the Underground Railroad, and the first African-American mayor of Chicago, Harold Washington.

“I like living here because it is close to everything. Anything you want—transportation, the hospital, stores are all nearby,” Turner said.

Not everyone was thrilled with the formation of the cooperative. Neighboring property owners kept a peering eye on the board—but began to notice a change over time. Tenants who violated the rules were removed, the roof was repaired, the lawn was well-kept, a new porch was constructed, hallways were painted, the laundry room modernized. The members of the cooperative took real pride in their home and maintained it as best they could.

The repairs were overwhelming: both units were a complete gut rehab, and the floor in one had to be lowered. Any new windows had to meet the restrictions imposed by the building’s official landmark status.

Over the years, the Cooperative’s waiting list grew to more than 100 families. Still, the board of directors found themselves facing low scores during their annual HUD inspections. The building’s windows were deteriorating; two units were in such disrepair that they sat vacant for 17 years. The directors wanted to improve their score but needed financing to get the job done properly.

Limited equity housing co-ops are something many mortgage lenders have a hard time financing, and the board struggled to secure a loan—until they met Chicago Community Loan Fund.

CCLF is one of the few lenders in our region to embrace limited equity housing cooperatives, because it believes in their mission of wealth-building for low- and moderate-income families through ownership of shares in the cooperative.

CCLF provided the board of Woolman-Washington with a loan of $600,000 to replace the exterior windows and to bring the two vacant apartments back online. The repairs were overwhelming at times: both units were a complete gut rehab, and the floor in one had to be lowered. Additionally, any new windows had to meet the restrictions imposed by the building’s official landmark status.

Keyshawn, 5, and Azeviah, 6, came under the guardianship of their grandmother while she was living in a one-bedroom apartment at Woolman-Washington, which was at capacity. CCLF’s loan opened a new two-bedroom apartment she was able to move into, giving the children a bedroom all their own.

Marion’s granddaughter Kimberly Turner is now president of the Cooperative. “The best thing about CCLF is that they have been patient, very patient,” she said.

“It took two years to repair two units that were planned to be completed in six months,” Turner said. “I appreciate that CCLF gave us the opportunity. They were the only ones that did.”

Within days of completing work, the two units were contracted for occupation for the first time in 17 years.

Esther Tabb has already settled into one of the units. Tabb had been living in a one-bedroom apartment when she was granted guardianship of her grandchildren, Keyshawn and Azeviah. Thanks to CCLF’s financing, they now live in the newly renovated two-bedroom unit, where the children have room to sleep, study and play.

“It is a family environment,” Kimberly Turner said. “I like walking out of my home knowing I am safe. I like living here because it gives me peace of mind.”