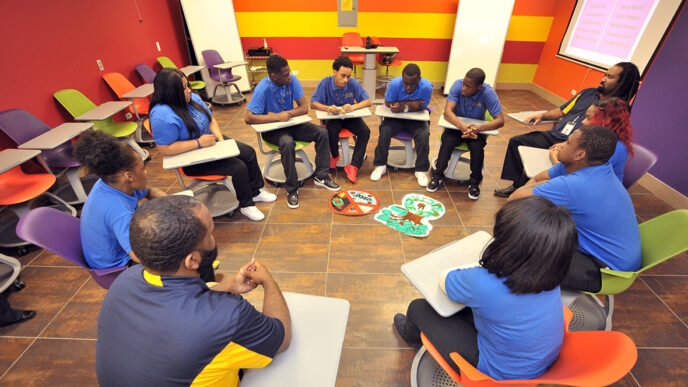 Zuberi Owens has more on his mind than many high school students do.

A mother on dialysis to treat her kidney disease. A neighborhood that’s rife with gang violence. A history of behavior problems that led to expulsion from his last school.

But twice a week, in a bright, welcoming room, all that falls away. It’s time for a Peace Circle.

Peace Circles are a simple but powerful component of the Voices for Peace violence reduction program at the Academy for Scholastic Achievement, an Austin-area high school serving at-risk youth ages 16 to 21. With ongoing grant support from the African American Legacy, an identity-focused fund at The Chicago Community Trust, the Peace Circle program has proven effective at helping students resolve conflicts in new ways.

“Before I came here, I was going down a bad road,” says Owens, now a senior at ASA. “Now I can have a bad day, but Peace Circle, it takes my mind off it.”

Owens is one of several dozen ASA students who voluntarily participate in the Peace Circles—small groups that meet each Monday and Friday to talk about problems at home, concerns at school or anything else on their minds. Two adult mentors keep the conversation on track. Everything said in the Circle is confidential.

“A great percentage of our kids have been involved in the juvenile justice system,” says school CEO Gladys Simpson. “They come to us angry, frustrated, alone.”

“We aid them in changing into people who have social skills, who are able to understand why they feel the way they do, who have the tools to maneuver through life without having to fight their way through.”

For three years, African American Legacy has awarded grants to support the school’s violence-prevention initiative, which includes not only the Peace Circles but also service learning projects and after-school activities.

AAL grants committee chair Mary Pattillo is confident that giving ASA students a safe, nonjudgmental setting where they can be heard has wide-reaching positive consequences.

“We had a kid whose cousin got shot, and he was going to retaliate. That was on a Friday. The other kids in the Peace Circle told him, ‘If you get killed, how is that going to affect your family?’ On Monday, he hadn’t retaliated. Just talking to him helped.”

“Within these small groups, students learn strategies for managing their emotions and for productively reducing conflict in their families, their neighborhoods and within the school,” she says.

“In the end, these tools will reduce young people’s involvement with the criminal justice system and reduce the trauma they experience by witnessing violence around them. We hope that the educational goals of the school will be more attainable because young people will be less stressed by conflict,” says Pattillo.

In the three years since the Peace Circles began, mentor Reginald Breashears has seen many positive effects in the lives of the 150 youth who have participated.

“We had a kid whose cousin got shot, and he was going to retaliate,” Breashears remembers. “That was on a Friday. The other kids in the Peace Circle told him, ‘If you get killed, how is that going to affect your family?'”

“On Monday, he hadn’t retaliated. Just talking to him helped.”

By teaching skills such as conflict resolution, frustration tolerance, anger management and negotiation, the Peace Circle program has measurably improved student outcomes as well. Among participating students, fewer than 10% have been suspended from school. Two-thirds have received three or fewer disciplinary reports. The average attendance rate is 79%. And academic scores have risen.

The program has been so successful that ASA plans to incorporate it into the school’s curriculum.

For junior Kandyn Hatley, 17, being part of a Peace Circle has led to bigger dreams for herself, too.

“I love that we talk about positive stuff,” Hatley says. “It makes me want to go to college, to be more secure in my future.”