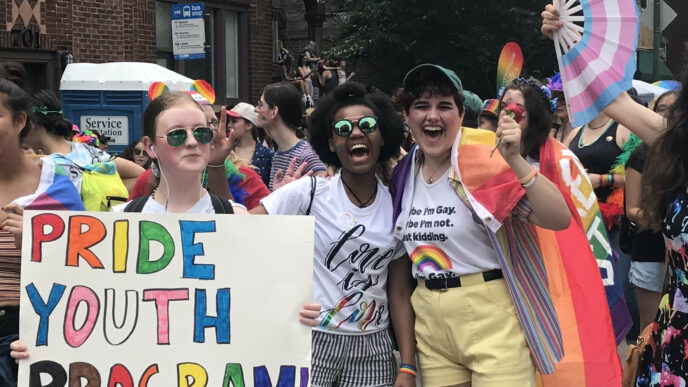 A Tribute to a ‘Beautiful Soul’: How the LGBT Community Fund Honored a Donor Family with a Memorial Grant

Cindee and Bill Dietz want to make a difference in the world, and their long-time philanthropy is a reflection of those values. Whether giving back to the community through their company’s foundation, the Heartland Children’s Foundation, supporting UNICEF (Bill sits on the Midwest board), or giving through their donor advised fund, the Dietzes are committed to doing social good.

LGBTQ issues are a personal priority for the Dietz family. Inspired by their daughter Katie Hunter, Cindee and Bill got involved with the Trust’s LGBT Community Fund in 2016 as donors, giving crucial philanthropic dollars to help the Fund provide grants to organizations serving the LGBTQ community in the Chicago region.

“When Katie came out as trans, it became a very personal issue for us,” Bill said.

Their philanthropy is also driven by a concern over the lack of resources to address the LGBTQ community’s growing needs, something the LGBT Community Fund has been working to better understand.

Last year, the Fund released a report, the 2019 Chicago LGBTQ Community Needs Assessment, that gathered survey responses from over 2,000 individuals to uncover current concerns and where resources are most needed in the region’s LGBTQ community. Findings from the report highlighted five areas where survey respondents saw inequities: income/living wage; discrimination based on race, sexual orientation, or gender identity; community safety; employment; and health insurance, physical and mental health services and care. Most notable, discrimination and safety concerns were cited more frequently in the report, in comparison to a similar report that was commissioned in 2011.

“There is a huge need and we need to find funding. This is not foremost in a lot of people’s eyes – they’re not aware of the pressures, the stigma, the struggle to live an authentic life,” said Bill. “If we’re going to be compassionate and respectful of each other and of life, we have to help.”

A gifted musician, scholar and teacher, Katie was passionate about everything she did. According to Cindee, one of the most inspiring things about Katie was her ability to have compassion for everyone.

“She was an amazing person with unlimited potential,” Cindee said.

When Katie passed away in November of last year, the Dietz family asked that donations be sent to the Fund, among several charities. In her memory, they hope to help other young people live their lives authentically and being accepted by society.

Because of the Dietz’ commitment, and the outpouring of support that was given in Katie’s memory, the Fund’s Steering Committee decided to award one of its spring grants in Katie’s name.  Youth Services of Glenview/Northbrook was of particular interest to the Dietz family because of its Pride Youth Program which offers social, support and leadership programming for LGBTQ+ youth and their families in the northern suburbs. The grant will help the organization expand its youth services.

“We are very grateful to Cindee and Bill for their generous and consistent support of both the first and second LGBT Community Funds,” said Fund Co-Chair Ken O’Keefe. “And we would like to honor Katie’s memory by naming the grant to Youth Services for her. Their comprehensive approach to serving LGBTQ youth is a fitting tribute to a beautiful soul.”

For the Dietz family, supporting LGBTQ causes through their philanthropy has become a lifelong commitment.

“Anything that we can do in her memory to help other young people that are going through what Katie did – being transgender, with all of the societal and psychological pressures – anything we can do to help we want to do,” said Bill.