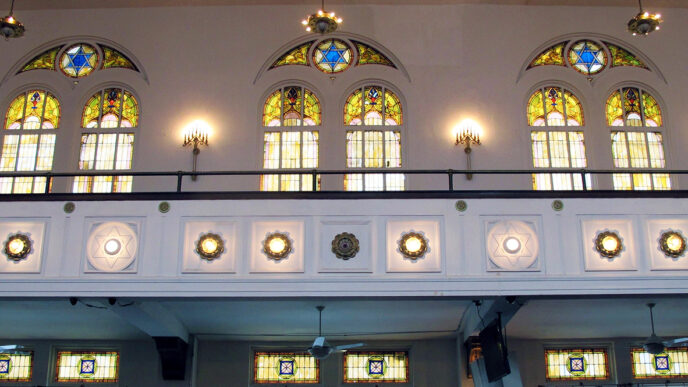 The civil rights movement has been a nexus for African Americans and Jewish Americans for more than half a century. Now a lovely old building in North Lawndale is bringing the two communities together to celebrate their common history, and their common goals.

For the last three years, the Stone Temple Missionary Baptist Church at 3622 W. Douglas Blvd. has hosted celebrations on Dr. Martin Luther King, Jr.’s birthday in January—welcoming not only members of the African-American congregation but also Chicago’s Jewish community, which had a huge presence in the North Lawndale neighborhood until the 1960s.

The church—which began its first life as a synagogue in the 1920s—was designated an official Chicago landmark as of July 20, 2016.

“Let’s build that bond again, because it’s there. Let’s show the world how we’re connected,” says Blanche Suggs-Killingsworth, a North Lawndale resident since 1962.

Anshe Sholom Synagogue was built in 1926 to served North Lawndale’s vibrant Jewish community. Now home to the Stone Temple Missionary Baptist Church, the building was awarded landmark status by the City for its architectural and historic significance.

The chair of the North Lawndale Historical and Cultural Society, Suggs-Killingsworth remembers many Jewish residents and institutions from her early days in the neighborhood.

Until the early 1950s, North Lawndale was known as “Little Jerusalem.” The blond brick-and-terra-cotta Anshe Sholom Synagogue was built in 1926 for the First Roumanian Congregation. It was one of a number of Jewish institutions in the area that included several other synagogues, schools, an orphanage, a home for the aged and a Yiddish theater.

Golda Meir, who would go on to be the Israeli prime minister in the early 1970s, lived at 1306 S. Lawndale in 1917 and worked at the Lawndale Branch Library.

And Julius Rosenwald, a Jewish philanthropic leader in Chicago, served as a top executive at Sears, Roebuck & Co., when it was headquartered nearby at 923 S. Homan. Rosenwald funded 5,000 schools for African-American students across the South between 1912 and his death in 1932.

Members of the First Romanian Congregation at the synagogue during a celebration of Yom Kippur in 1934. Photo from the Chicago Tribune archives.

North Lawndale’s Jewish residents began moving out to the suburbs and the far reaches of the city in the 1950s and early 1960s. The synagogue was sold in 1954, and became Stone Temple Baptist Church.

The church would have a close relationship with Martin Luther King Jr., who preached from its pulpit in 1959 for the first of many times. The founding pastor, the Rev. James Marcellus Stone, was an old friend of the civil rights leader’s father. For a time, Dr. King lived in a apartment on S. Hamlin Avenue, just a few blocks away.

Meanwhile, the Jewish community in Chicago and across America embraced the civil rights movement in significant numbers. They played prominent roles in historic events like the Freedom Rides, the March on Washington, the “Freedom Summer” voter registration project and a 1964 protest at a segregated motel in St. Augustine, where 16 rabbis were arrested.

Bishop Derrick Fitzpatrick, pastor of the Stone Temple congregation, identifies poverty as the most pressing problem for North Lawndale today.

Bishop Fitzpatrick, the grandson of founding pastor Rev. Stone, points out that gun violence is hard to stem when criminal activities offer the best-paying jobs available to North Lawndale’s young people. He would love to see a more hands-on effort around job training and job creation.

“Our young men are coming to church saying, ‘Can you help me find a job?’ but our congregation doesn’t have the resources, not by ourselves, to help them,” says Bishop Fitzpatrick.

“We are trying, after three years of a stand-alone event, to incorporate more events throughout the year that we can utilize to help further work together and build up the North Lawndale community.”

“We can’t just go back to our own homes and our own neighborhoods and lock our doors and feel safe when five miles away, they’re not.”

“We’ve worked hard to create touchpoints between the two communities. Martin Luther King is just one of those.”

The JCRC, the community relations branch of the Jewish United Fund of Metropolitan Chicago, has been a co-sponsor of the annual Martin Luther King, Jr. Day celebrations, along with the Stone Temple Missionary Baptist Church, the North Lawndale Historical and Cultural Society and The Firehouse Community Arts Center.

On July 24, 1960, King addressed a rally at Stone Temple Church, encouraging attendees to assemble the following day for a march to the Republican National Convention, being held at the International Amphitheatre. Photo courtesy of the Timuel D. Black Jr. collection.

These commemorations have evolved into a civic occasion: Mayor Rahm Emanuel, Congresswoman Jan Schakowsky and other officials attended in 2016. Attendees pitch in to serve breakfast to dozens of neighborhood residents, before gathering in the historic sanctuary.

While celebrating the black and Jewish communities’ shared history in North Lawndale is compelling, says Brown, “what’s more important is what we’re doing today: outreach on gun control and violence, and working together to improve the community.”

Addressing gun violence is a longstanding initiative of the JCRC. “So many people in our community care about this issue. It’s all of ours to deal with,” Brown says.

“We can’t just go back to our own homes and our own neighborhoods and lock our doors and feel safe—safe enough—when five miles away, they’re not.”

Today, the Stone Temple Church’s Jewish imagery remains mostly undisturbed. Bishop Fitzpatrick says he is very much at peace with the vibrant stained-glass windows that show Noah’s ark and other depictions of stories from the Torah—and the Old Testament—as well as Stars of David, menorahs and other Jewish motifs. Not only are the Biblical scenes relevant to his congregation, he explains, but “we understand that Jesus was Jewish and worshipped in a synagogue.”

Now that the church has been granted landmark status by the Chicago City Council, all these historic architectural details will be protected for the future. The landmark designation will be celebrated at a service on Sunday, August 28, 2016.

“We are looking to use that day as another avenue to reach out and serve the community,” says Bishop Fitzpatrick.