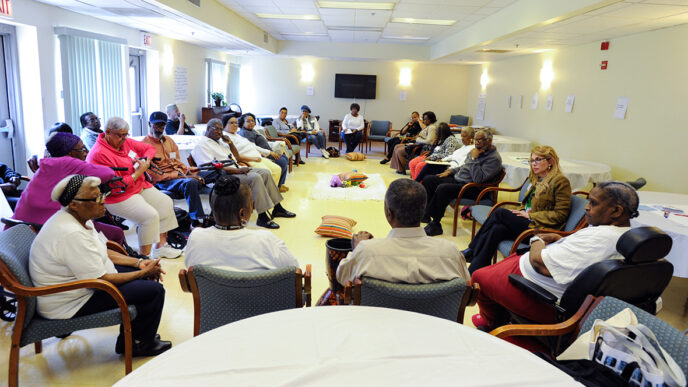 A ‘Social Toolkit’ to Stop Violence and Bridge Generations

Re-connecting with two friends at an On the Table event in 2015 helped community activist Laura Morgan pursue a new strategy in her campaign to stop the violence and dysfunction in her South Side neighborhood.

Morgan—a retired educator, and a leader in a number of civic organizations and campaigns in and around South Shore, where she has lived for more than 40 years—is an enthusiastic supporter of “Social Emotional Learning,” an educational and social toolkit that helps children learn to be more mindful, in control of themselves and attuned to the needs of others. The Illinois State Board of Education has endorsed SEL, but actual programs are scarce in the schools.

Morgan thinks SEL might hold the key to turning around the prospects for young people in neighborhoods like hers, where gun violence and gang activity have become commonplace.

Morgan herself organized the On the Table lunch she attended last year, at a South Shore senior citizen residence. Two of the people she invited were former schoolteachers she knew from volunteering in the area. Shortly after that event, the two started a new organization they called the Seventh Ward Community Partners Education Committee, and they invited Morgan to form a sub-committee for the promotion of SEL.

Using her new official platform, Morgan sought funding to develop a program that would deploy SEL-trained facilitators in five South Side schools to train teachers and parents. She has applied for one large grant and if that one doesn’t come through, she’ll keep applying until she’s successful, Morgan says.

“We have to learn to talk to one another,” she says.

Retired nutritionist, professor and community leader Laura Morgan hosted an On the Table lunch at a senior center in her South Shore neighborhood. The event reconnected her with two old friends who share her passion for education; she now chairs a subcommittee of their organization to implement social-emotional learning in neighborhood schools.

Morgan chose the Kingston Place senior residence for her On the Table lunch because it was a comfortable setting for community members to meet. Morgan, a nutritionist and retired home economics professor in the community college system in Chicago, served baked chicken, mashed potatoes, green beans, rolls, peach cobbler and iced tea to about 20 people.

“I was looking for a place that was big enough for the group, with a garden and a lot of glass, where I could bring food. I wanted people to feel like they were away from home, but homey,” she says.

Morgan actually dipped into the SEL toolkit for the interactive approach she took to the event, called the “World Café” method. She was gratified to see that it seemed to put attendees at ease.

“The premise is that no one is talked down to, that everyone feels a part of the process, that they are listened to and made to feel that their message has been heard,” Morgan says.

About half the participants were seniors who lived at Kingston Place, and the other half came from the neighborhood. The agenda centered on general community concerns.

“We can all just leave. Or we can stay and fight to make our neighborhood a vibrant place to raise our children, which is what I’m doing.” Learn more about Laura Morgan and her fight for her community: A Death Across the Street Inspires a Movement to Reclaim South Shore

Morgan was interested to hear the seniors in attendance talk about “how they raised their kids, versus how kids are being raised now. They talked about how there is a lack of respect for seniors that was not there back in the day. Seniors want to be respected for what they did for the communities themselves.”

The conversations at On the Table got Morgan thinking about the interconnectedness of all the parts of her community. She says what she learned there “will help me as I work with young families. SEL is training adults and children on life skills.”

Morgan is planning to host an On the Table lunch again this May, and she’ll be bringing it back to Kingston Place. And this year, the event will be “all about the seniors.”