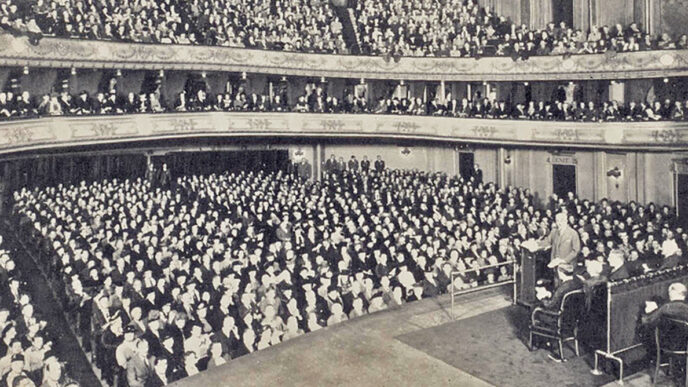 A Social Club for Fellowship, Faith and Philanthropy

Dedicated to the moral welfare of the city, the Chicago Sunday Evening Club’s origins intertwined with The Chicago Community Trust’s.

The Chicago Sunday Evening Club was organized in 1907 to maintain “a service of Christian inspiration and fellowship in the business center of Chicago, and to promote the moral and religious welfare of the city.” Reflective of the city’s leadership at the time, the Chicago Sunday Evening Club was a public forum for Protestant values, work ethic and contemporary notions about prosperity and philanthropy.

The idea behind the club was to develop an informal organization, or council, of promising young leaders who were beginning to make a place for themselves in Chicago.

Trustees of the club—including presidents of banks and large corporations, lawyers and other prominent citizens— would meet for dinner in small groups. After dinner, the attendees would gather at Orchestra Hall for an address by a speaker: a civic luminary, social worker or business leader.

Clifford Barnes organized and served as first president of the Chicago Sunday Evening Club, and Frank Loomis was its manager. Both would go on to lead the Trust: Barnes as Executive Committee chair, Loomis as executive director.

Clifford Barnes, the Chicago Sunday Evening Club’s organizer and first president. At one of the Club’s luncheons, Barnes met Trust founder Norman Wait Harris, who would appoint him to chair the Trust’s board in 1915—a post Barnes held until his death in 1944.

Individuals who were closely associated with both the Club and the Trust included William P. Sidley of Sidley & Austin, Norman W. Harris of Harris Trust and Savings Bank, Harold Swift, William H. Avery, George E. Johnson, James Beré and many others.