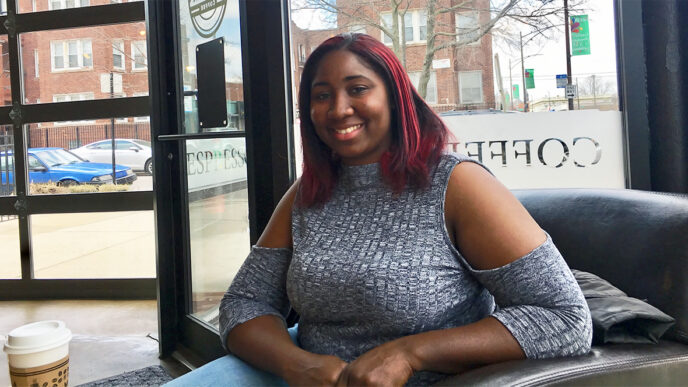 A Rising Star Chef, and the Business Incubator Helping Her Shine

Tiffany Williams had been cooking professionally her entire adult life when she landed a gig providing food backstage for the NFL draft.

The owner of The Goddess Rocks Catering, Chicago chef Debbie Sharpe, was so impressed with Williams’s work ethic and her skills that, when the draft was over, she offered her another gig. “We’re going on tour with Beyoncé in a couple weeks. Do you want to go?”

“I told her I’d think about it,” Williams says with a laugh.

[pullquote]Touring with Beyoncé. Head chef at Lollapalooza. Tiffany Williams of @SoEcevents is soaring with support from Woodlawn’s @EnterprisesSun, which “works to bring dignity and honor to entrepreneurs who are starting to scale their business”[/pullquote]

Williams went out for two and a half weeks with Beyoncé, and spent the next year or so working with Sharpe on massive events at Soldier Field, Allstate Arena, Northerly Island and the like. Her last big gig was as the head chef backstage at Lollapalooza in Grant Park.

“I was dead after that,” she says. The mother of three had been working 18-hour days and had barely seen her kids. She was ready for something more sustainable. And her work with Sharpe had given her the confidence to finally act on her own vision. “As much work as I have done with various catering companies over the years,” she remembers, “I thought: I could really do this for myself.”

By then, Williams knew about Woodlawn-based Sunshine Enterprises through a friend at her church. Sunshine’s parent, Sunshine Gospel Ministries, has been an anchor of Woodlawn since 2001, when it moved to the South Side from its longtime home in Cabrini-Green. Founded in 1905 by Moody Bible Institute, the organization has grown over the past century from a rescue mission and youth ministry to include mentoring, education programs and, most recently, a multifaceted incubator for black-owned businesses.

Access to credit and capital is a longstanding and well-documented challenge for entrepreneurs in predominantly low-income and racially segregated neighborhoods like Woodlawn. Sunshine Enterprises helps business owners like Williams bridge the funding gap.

Sunshine’s Community Business Academy program is a 12-week course that offers hands-on training in business planning, management, budgeting, bookkeeping and marketing. Unlike other programs, Sunshine continues to support entrepreneurs after the classroom through its Business Acceleration Services program, where participants develop not just a traditional business plan, but rather a model for creating value for clients.

The organization also works to connect its entrepreneurs with business contacts that can provide access to social and financial capital—the kind of invaluable support networks that traditional business school graduates may have already, but entrepreneurs of color working within disinvested neighborhoods often lack.

The Chicago Community Trust has provided grant funding to support the Community Business Academy and Business Acceleration Services, as well as to support a business technology center and help Sunshine deepen its support services to neighborhood entrepreneurs.

Across the street from its headquarters is Greenline Coffee, Sunshine’s co-working space and coffee shop. Working at the café as a barista, Williams had started applying her culinary skills to help develop a new menu when a Sunshine trainer started, in her wry words, “hassling” her about exploring the Community Business Academy program early last year.

It didn’t take long for Williams to sign on. And with Sunshine’s training, Williams was able to grow her own fledgling catering business, Exquisite Catering and Events.

“It was the best decision,” she says now.

“I knew my P&Ls [profit and loss statements] from working as a general manager—I knew food costs and all that. But looking at my cash flow, I didn’t really focus on that as much with my first little business. And marketing: I didn’t realize how much marketing and advertising and promoting you have to do. That was huge.”

In the marketing class, says Williams, she had to come up with a logo and develop a marketing plan by identifying and analyzing her competition: “Really narrow down who we’re selling to and what we’re selling, and how to make it effective.” She learned social media strategies, and how to network. But while she says the marketing skills she learned were critical, it’s been the ongoing support the program offers that has really made a difference.

She meets with one of her coaches—Loren Williams, the same trainer who once “hassled” her into considering the program back at the coffee shop—on a regular basis. Together they assess her progress, identify challenges, and set new goals. “She’s more like a cheerleader,” says Williams. “She really keeps me focused and keeps me accountable.”

“I knew my P&Ls from working as a general manager—I knew food costs and all that. But looking at my cash flow, I didn’t really focus on that as much with my first little business. And marketing: I didn’t realize how much marketing and advertising and promoting you have to do. That was huge.”

Since it launched in 2012, the Community Business Academy has helped more than 50 small businesses take their work to the next level, with programs on the South Side, the West Side and in Evanston. Another 30 or more have accessed Sunshine’s complementary Business Acceleration Services.

The curriculum is modeled on that developed by New Jersey-based Rising Tide Capital, whose work won accolades in 2009 from President Barack Obama. Sunshine Enterprises is the first of several planned “replicator” organizations built on Rising Tide’s success. Each person accepted into the program gets a $3,000 grant to cover their tuition and other costs.

“We work to bring dignity and honor to entrepreneurs who are starting to scale their business,” says director of development and communications Shandra Richardson. “We look at what’s needed to support those who are underserved, and what we need to do in the city to foster an inclusive economy.”

Access to credit and capital is a longstanding and well-documented challenge for entrepreneurs in predominantly low-income and racially segregated neighborhoods like Woodlawn. Sunshine is one of several incubators that aim to help business owners like Williams bridge the funding gap. She’s planning to apply for a small business loan in the next few months, as she moves operations into a commercial kitchen space in Pullman and launches a handful of other new projects in development. Thanks to Sunshine, she says, her financials are more than ready.

Nowadays, Williams has her elevator pitch honed: “We’re a full-service catering company that specializes in international cuisine. We also teach hands-on cooking classes that are designed to create awareness of culture through food and start conversations.” She’s already got a fistful of high-profile events on her calendar for the summer, including the Woodlawn Food Truck Festival on July 15 where she’s one of the producers. And she’s opening a small retail space to launch Exquisite To Go in September.

“I’m from Woodlawn and never knew a program like this existed in the neighborhood,” she says. “It definitely helped me see the next level I can go to.”