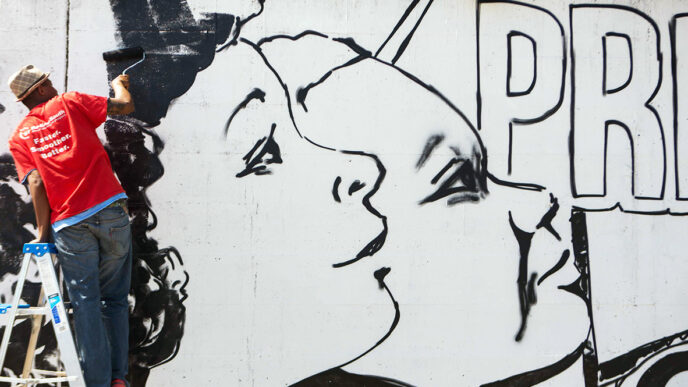 A Renowned Muralist’s Tribute to His Grand Crossing Roots

The Chicago region has a rich artistic legacy. One artist who is embracing the city’s past while using his talents for good is Chicago-based Joe “Cujo” Nelson. A designer for the Chicago Transit Authority and internationally recognized mural artist who has been invited to work in Italy, Ireland and Kenya, Joe has managed to find a healthy balance between art and philanthropy. His newest mural project is located at the intersection of Cottage Grove and 71st Street in Greater Grand Crossing.

The project has taken on a special significance for Joe, who was born and raised in that neighborhood. The mural, created in collaboration with local volunteers and coordinated by Chicago Cares, showcases Joe’s skills while also celebrating the neighborhood’s historically significant residents like Eugene Sawyer and Marshall Taylor. We asked Joe to share his thoughts on his work and using his talents to serve the larger community.

Q: What is your earliest memory of using your talents to give back?

A: I’ve been painting and drawing for as long as I remember. I actually attribute my career as an artist to Saturday morning cartoons. That kicked me off and that’s where my roots are. It’s an accident really that I ended up in the design world, but [giving back] has become so important to me. One time, I left my 9-to-5 job just to paint a mural at Ralph Ellison High School on the South Side of the city with eight other students, and it’s still there. That was a pretty big job for me. I hit a point where I thought, This is more important than solely worrying about me and my career. You can get so much out of giving to others.

A: Giving back in any way that you can, that’s philanthropy. That’s worth more than having a couple of bucks in your pocket. Right now, I’m in a corporate environment for half of my day, and sometimes it gets so cutthroat to the point that everyone is trying to get ahead. It’s easy to lose sight of what’s really important. You get caught up in chasing money and doing all of these things to solidify your career path. The money is fine, but there are so many other things that are worth more in life. I’d throw it all away to be at one with my craft.

Q: How do you think your work impacts the Chicago community?

A: I’m creating art right now and it’s solely for the purpose of sharing. It sounds cliché, but I want to give people something that lasts and touches them. It’s a piece of me, but I want that piece of me to turn into a piece of them. I’m building several small bodies of work because I think they have a more personal impact. I like to give small, intimate pieces of myself. When I make these artworks I’m thinking, Take this piece home with you and let it mold into your space. I want it to become a piece of them. That’s what I want. And for me, murals do that on a larger scale. They become part of your larger surroundings.

Q: How does volunteerism make an impact on a community?

A: As someone who paints murals with a crew, I believe that working collaboratively can provide a true sense of community. I have the heart to do a lot of these projects on my own, but it’s so much harder as a single person to carry out a large project like a mural. Having a team of people connecting and networking with the same goals in mind is the ultimate recipe for success. People just need to reach out and be open. I personally feel blessed to be working on this mural at Greater Grand Crossing along with Chicago Cares. It’s huge for me, and honestly one of my better walls. At this point, it probably means the most to me.

Q: What is this mural about and how does it relate to spreading the spirit of philanthropy?

A: Well, the neighborhood of Greater Grand Crossing, and having the pleasure of being born there, is what makes the piece bigger than anything that I’ve worked on in a while.

The meaning behind it speaks to a very large audience. Its theme is to inspire people to be more—but it draws from a larger concept than that. It speaks to the history of the area in order to build a greater sense of pride from where one comes from. It’s truly heartfelt. For example, there are kids on there looking up towards the future, there’s a huge railroad crossing sign designed by the group I was working with. There are the bungalows that reflect the architecture of neighborhood. It depicts a group of people who all resided in the area of Greater Grand Crossing, such as Gwendolyn Brooks, a phenomenal poet, and Marshall Taylor, a world class bicyclist. They are inspiring people that came from Greater Grand Crossing and there’s nothing that stopped them from attaining a high level of greatness.

I didn’t create [the mural] to solely represent black icons, but more so to reflect the cultural neighborhood that it is situated in. We should all have a sense of pride about where we come from, regardless of our nationality. I wanted to give this neighborhood that feeling.

Q: You are a philanthropist—what advice do you have for others who want to do good?

A: Do what you love. Once you get older and try to find your place in life, make sure that you are still doing what you love. I was lucky enough to figure out what I wanted to do very early on in life, and I’ve spent all of my time perfecting that craft. Figuring out what you want to do is the hard part, but once you’re engaged with what you care about, it’s natural to want to share that gift with others. Once you’ve found it, you want to give it to other people so that they can have the same feeling you have. That’s what love is about. You want to share it. That’s what the aim is. You share that love, and that’s the best way to give back. It’s so simple, yet so major.