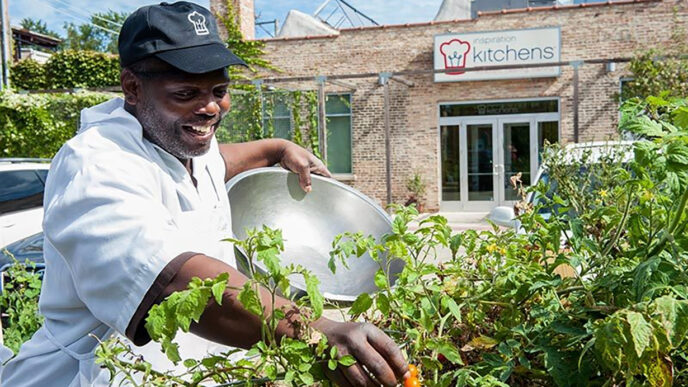 Between the Garfield Park Conservatory and rows of worn Green Line tracks sits Inspiration Kitchens. Each year more than one hundred people come here to begin new lives and new careers through a shared passion for cooking.

One of those people is trainee Elio Lopez. While incarcerated, Lopez spent seven years running the inmate kitchen and honing his cooking skills; however, finding employment that leveraged his skill set and experience after incarceration was quite difficult. On average, the unemployment rate for the formerly incarcerated is nearly five times higher than for the general population.

At Inspiration Kitchens, Lopez was able to start planning for his future.

“Cooking is my passion. My long-term goal is to become a head chef and maybe run my own business,” says Lopez. “Inspiration Kitchens taught me how to be confident and lead.”

Inspiration Kitchens offers three-month courses, with new classes starting every month. During the three-month training program, participants learn a variety of skills and gain hands-on experience by preparing the food that’s served at the Inspiration Kitchen restaurant. According to Evan Cauble-Johnson, chief development officer at Inspiration Corporation, when the program began the neighborhood was listed as a food desert; there were no other restaurants with seating in the area.

“We really believe in food as a vehicle, not only to provide nutritional support, but also a vehicle to bring together communities,” says Cauble-Johnson. “We wanted to fill that gap in this neighborhood and provide an asset to East Garfield Park.”

After completing the program, participants are eliligble to apply for several food service certifications, including City of Chicago and State of Illinois Food Service Sanitation Manager, which better equip them to pursue jobs in the culinary field.

“The opportunity to do meaningful work is really incredible. It’s amazing to see people’s sense of self-worth and dignity restored through the work that they’re doing.”

Through its parent organization Inspiration Corporation, Inspiration Kitchens received two grants from Unity Fund to support its job training and job placement programs. According to Cauble-Johnson, funding from Unity provided flexibility for Inspiration Kitchens to better help program participants address the obstacles they face on a daily basis to participating in the program, including transportation and childcare.

East Garfield Park is among the top 10 neighborhoods in the Chicago region to which people return from incarceration. For Inspiration Kitchens, their work to reduce recidivism rates by providing ongoing job training and placement assistance during and after the program is crucial to both the community and the program participants they serve.

“The opportunity to do meaningful work is really incredible,” says Cauble-Johnson. “It’s always amazing to see people’s sense of self-worth and dignity restored through the work that they’re doing.”

In addition, the personal connections and camaraderie that the program participants make during their time at Inspiration Kitchens are invaluable too, according to Lopez.

By donating to Unity Fund, your support restores stability for people in crisis by helping them access services instrumental to their self-sufficiency. Join other generous donors and The Chicago Community Trust to make our region—our home—a better place to live for everyone. Make your gift today.