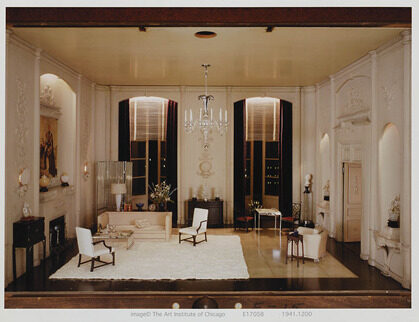 A Passion for Art and Philanthropy Brings Joy to Generations

For more than a decade, The Art Institute of Chicago has been decking the tiny halls of its Thorne Miniature Rooms for the holidays. As you’re out this season, once again enjoying beloved Chicago traditions, take a moment to reflect on the legacy of philanthropist Narcissa Niblack Thorne, who brought these rooms to life and turned to The Chicago Community Trust to help ensure that they would continue bringing joy to future generations.

The Thorne Miniature Rooms are one of the Art Institute’s most popular permanent collections. Created at a scale of one inch to one foot, these intricate examples of American, European, Chinese, and Japanese interiors sprang from Thorne’s vivid imagination. Thorne’s love of dollhouse miniatures began during her childhood in Indiana. When she was 19, she married her childhood sweetheart, Montgomery Ward department store heir James Ward Thorne. Narcissa quickly became a prominent philanthropist in Chicago, giving her time, money, and even some of her dollhouses to cultural institutions like the Art Institute and various charities and hospitals.

Through her charitable work and dedication to both the arts and child welfare, she became close friends with the Trust’s former executive director James Brown IV, who described her as “one of the most beautiful, gifted, and generous women I have ever known.”

Thorne’s passion for miniatures continued throughout her life. By 1930, she was researching period architecture, interior design, and decorative arts to create sketches and blueprints for miniature rooms to house her collection. She assembled a group of some of the top architects, interior designers, and craftsmen in the country to create 100 rooms at her studio on North Michigan Avenue. She lavished attention on the smallest details of the miniatures, specially commissioning and purchasing furniture, carvings, and even original works of art from England and Paris.

Out of the 99 Thorne Miniature Rooms believed to still to be in existence, Narcissa donated 68 to the Art Institute of Chicago in 1941. After her death in 1966, Narcissa made a large bequest to The Chicago Community Trust in her will. She stipulated that the first draw on the income should be devoted to maintaining the miniatures. She wrote to the Trust’s Executive Committee in 1963, “I will only add that these rooms have been a part of my life and I beseech your careful attention in seeing that these are properly preserved.”

The Trust continues to provide financial support for the Thorne Miniature Rooms’ upkeep so that new generations can enjoy their meticulous and beautiful portrayal of indoor worlds from centuries past. Thorne also stipulated that the balance of her bequest to the Trust would go to the Visiting Nurse Association and the Children’s Memorial Hospital. Her partnership with Trust ensures that her fund will continue to support her two passions—the timeless miniatures and serving children in need—in perpetuity.