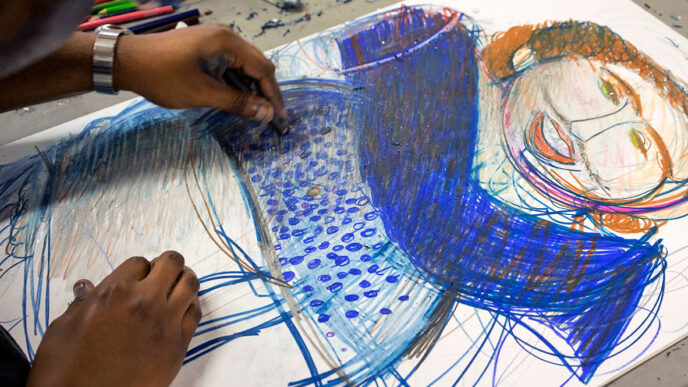 A Painter and a Sculptor Create Opportunity for Artists with Disabilities

Sometimes life takes you in an unexpected direction. That’s the lesson learned by Rob Lentz and Mark Jackson, co-founders of Project Onward, a gallery and studio that supports adult artists with mental and developmental disabilities.

Both Lentz and Jackson attended at the School of the Art Institute, with Lentz focused on sculpture and ceramics and Jackson on painting. They had completely different visions about where their careers were headed—Lentz was teaching, Jackson was a studio artist—when they met in 1997 at Gallery 37, the art incubator for high school students. It was here they discovered their mutual interest in the work of students with disabilities.

The goal of Gallery 37 was to prepare young artists for the professional world. But many of the participating students with disabilities were not going to continue on to art school, or college or a traditional job.

“Their options were drastically limited and yet they had this experience and were really good artists,” Lentz recalled. “They were aging out of Gallery 37 and there was nothing beyond this to facilitate their work independently.”

Lentz and Jackson knew there was interest in the artists’ work thanks to the popularity of outsider art, a term that applies to some of the artists at Project Onward but not all, Lentz notes.

“It does get to the idea that there are people who operate outside of the mainstream who have a lot of interesting things to say, and in this case help unlock some of the mystery and stigma about disabilities,” Lentz said. “We really wanted to explore these ideas.”

Founded in 2004, Project Onward eventually found a home in the Chicago Cultural Center, where the program expanded to include artists not under the Gallery 37 umbrella. After years of support from the city and nonprofit funders, the decision was made in 2013 to find a new home as an independent nonprofit. The search led to Bridgeport.

Now located in the Bridgeport Arts Center in the heart of the South Side neighborhood with around 60 artists on its roster, Project Onward occupies a large, light-filled space. Art is everywhere—hung on the walls, decorating the offices, sitting on the floor and in various states of completion on the artists’ work table. Their output is “truly amazing,” said Lentz.

“The artists receive a lot of encouragement and interest in their work and they thrive on that,” Jackson added.

As Project Onward has grown, it has depended more and more on volunteers who have been a great addition to studio life for the artists, said Lentz, as they “continue to meet new people and form relationships.”

As Project Onward’s executive director, Lentz does a little bit of everything from public relations to fundraising and working with the board. “Whatever the task, there’s this amazing core of what we do here that is always inspiring,” Lentz said.

Meanwhile, Jackson is the studio director, the main facilitator in the studio who deals more directly with the artists, commissions and exhibitions. “Working with the artists and seeing what they create is my biggest inspiration,” he said.

While every day presents new challenges at Project Onward, Lentz and Jackson can’t imagine being anywhere else.

“We have this weird skill set and perspective on things that we’ve developed over the years,” Lentz said, smiling. “Communicating with people who don’t have the same frame of reference as you do forces you to listen in a completely different way. Connecting with the artists in this way is something we really cherish about the job.”

Update: In 2018, Project Onward was selected as a member of SMART Growth, the Trust’s multi-year funding initiative to help small arts and cultural organizations grow in sustainable, resilient ways.