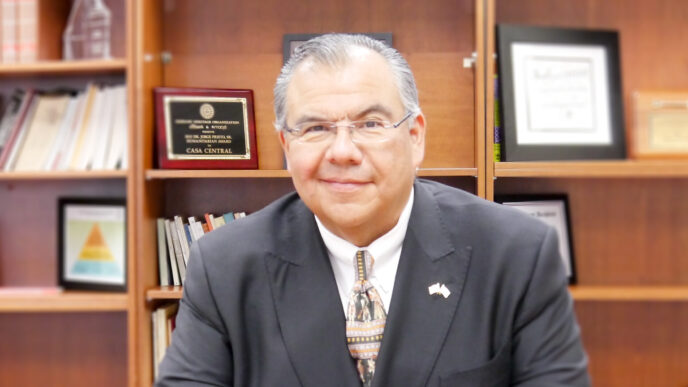 A Legacy of Community Engagement: How Marty Castro Expanded the Family Business of Giving

In celebration of Hispanic Heritage Month (September 15-October 15), the Trust is featuring a series of conversations with Latinx philanthropists and leaders who are making a difference in the region. Be sure take a look back at our previous interviews with Adela Cepeda and Luis Arguello, Jr.

Marty Castro’s introduction to philanthropy started at his father’s side. He recalls accompanying his father—a local activist and the city’s first Latino ward committeeman—around his South Chicago neighborhood, fundraising for the local church and community services. Although he once planned to become an astronaut, Castro chartered a course much closer to his Chicago home. He started his career in law, rising to partner at one of the world’s largest firms, and was selected by President Barack Obama to serve as chair of the U.S. Commission on Civil Rights, the first Latino to hold that post. Castro is currently the president and CEO of Casa Central, one of the largest Latino social services agencies in the Midwest. Along the way he served two separate terms on The Chicago Community Trust’s Executive Committee, where he was instrumental in the founding of Nuestro Futuro, an affinity fund of the Trust and the largest fund in the nation dedicated to Latinx philanthropy, and continues to sit on Nuestro Futuro’s steering committee.

Castro recently sat down with Meghan Lewit, communications manager at the Trust, to discuss his family’s legacy, his own career in public service, and the path that brought him back to “the family business” of philanthropy. Some questions and answers have been edited and condensed for clarity.

Meghan Lewit: Can you discuss your family’s legacy of community engagement? How has your life experience inspired you to give back?

Marty Castro: It’s kind of a family business. For at least a couple of generations before me, we Castros have been very involved in the Chicago community. My great-grandparents and my grandparents came from Mexico in the 1920s. They came to work and to make sure their families would have opportunities that they couldn’t have back in Mexico. My grandparents had very little, but they did have 17 children—my dad was number four of 17. Even so, they always had enough room at their table for someone else in greater need. Both of my grandparents were very involved in helping build and start the church in our South Chicago neighborhood, Our Lady of Guadalupe—the oldest Mexican parish in Chicago.

My father was also very involved in community service and instilled that in us. He founded the Our Lady of Guadalupe Youth Center. He’d get companies to donate mismatched gym shoes so that kids playing sports in the programs he put together would have shoes to play with. Eventually the City saw what my father was doing and hired him—so he became a social worker even though he never graduated high school. My first philanthropic experience was going door-to-door with my dad with coffee can in hand, raising money to build a monument for soldiers from our neighborhood who were killed in the Vietnam War, which to do this day still stands at the church.

ML: Did these early experiences motivate you to pursue a career in nonprofits and community service?

MC: While helping and being involved with the community is an inextricable part of who my family is, as a child and young teenager I did not envision my life as it is today. I envisioned myself as an astronaut. Until my junior year of high school that was my plan, but then my dad decided to run for political office and I got very involved in his campaign. I noticed that the people that were making decision that impacted my community weren’t from my community. The people that made the decisions that affected the daily lives of those I knew and loved didn’t look like us—and by and large most of them were lawyers. I thought I could use legal skills to have an impact on my community in a way that my dad couldn’t without a formal education. That is when I began to envision a life that is much more similar to where I am today.

ML: With such a long history of community engagement, is there a contribution or philanthropic achievement you’re most proud of?

MC: Being involved in the creation of Nuestro Futuro. It took several years, with myself and others on the EC (the Trust’s Executive Committee) and within the organization advocating for a Latino philanthropic fund that eventually became Nuestro Futuro. We are filling a gap—not only in trying to get Latinos involved in philanthropy but also identifying organizations that were not on the Trust’s radar or that needed some capacity building before they could successfully seek a grant from the Trust. We have identified many organizations in early stages that have since gone on to do great work. An example of this is Mano a Mano, an organization that provides health resources and services in the northern suburbs in Lake County where there is a fast-growing Latino population but very little infrastructure to serve the population.

ML: You have very deep connections to Chicago, tell me a little bit about the spirit of giving in the Latinx community here?

MC: We don’t call it philanthropy in the Latino community, but philanthropy is what we do every day. We support our church, we support our community organizations, we support our families back home. When we talk about the impact that dollars from Chicago and the United States have on home countries, that is philanthropic, but we don’t view it that way. What I want to communicate to the community here is: “You’re already a philanthropist. Now let’s channel some of those dollars to initiatives closer to home.” Latinos are very generous and charitable, and we want to harness that. I think we’ve gone a long way in achieving this, but there’s a lot more we can do.

MC: I’ve been here long enough to see a lot of different iterations of what we call ourselves. But that’s the beauty of our culture, right? We’re not monolithic. People think, “immigrants,” but it’s also people like me whose family has been here in Chicago for a century. We are every race under the sun—we have blue eyes and blonde hair, and we have people whose roots are from Africa and from the Caribbean. Hispanic Heritage Month give us an opportunity to have the attention of the nation to tell our story. It’s a chance to celebrate the diversity of who we are, but also to remember those things that bind us a community.

ML: Based on your own experience, what advice would you have for someone who is starting their philanthropic journey or looking for ways to become more engaged in their community?

MC: People think that you need to have this huge pot of money to be a philanthropist. You don’t. What you do need is a desire to make a difference. When I look at my own trajectory, there was no master plan. The plan that was instilled in me by my parents was: “You work hard, you get an education, and you give back to the community.” For me, it’s always been about being willing and open to learn. I am more a product of my failures than my successes, but every time I got to a crossroads in my career, I took a leap of faith. It’s nice to have traveled 360 degrees because my father started his career as a public servant, and here I am now, after taking this long trek to become a lawyer and being a federal and state official, back home to where Castros belong—serving the community.