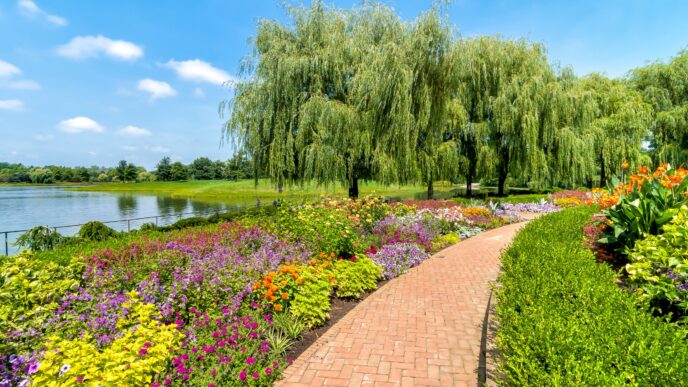 A Legacy Grows at the Chicago Botanic Garden

The city of Chicago was incorporated in 1837 as “Urbs in Horto”: a city in a garden. In 1972, with the assistance of the Trust, the Chicago Botanic Garden was born. It was created thanks to the longstanding relationship between James Brown IV, president and CEO of the Trust from 1949 to 1972, and philanthropist Mary Runnells. Through their joint vision and generosity, the Chicago Botanic Gardens became one of the world’s greatest living museums—a place of relaxation and horticultural research to rival the famous Kew Gardens in London or the Jardin des Plantes in Paris.

In 1890, horticulturalists founded the Chicago Horticultural Society to promote appreciation for gardening, botany, and conservation. In 1964, at the urging of Brown, the Trust granted $250,000 – nearly $2 million today – to the Chicago Horticultural Society to develop a 300-acre tract of land at the northern edge of Cook County.  Brown played a crucial role in constructing the Garden by chairing the building committee of the Garden’s board.

Working with Brown, civic leader and philanthropist Mary Runnells helped to fund the vision for a lush garden to benefit the region. A few years later, in 1971, she established the Mary W. Runnells Fund at the Trust, which continued to support cultural and art organizations in Chicago.

The Chicago Botanic Garden opened in 1972 as a permanent site for the Chicago Horticultural Society to carry out its mission. Today, it has 27 spectacular gardens spanning 385 acres and several important research centers and greenhouses.

Runnells wished for a tribute to Brown to be constructed within the garden. In a letter to Hermon Dunlap Smith in 1970, she wrote that “What [Brown] has done to implement and further the ideals of the Garden, I am sure the Board of the Trust, as well as the friends of the Botanic Garden, knew full well.”