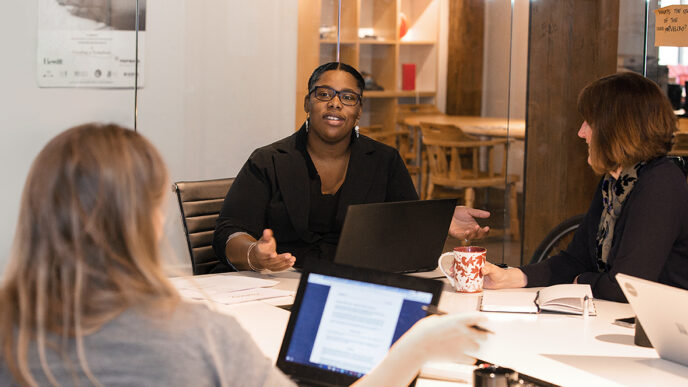 Brandies Meva’a recalls the experiences that led her to where she is today: co-owner of a digital marketing firm based in Chicago’s River North neighborhood.

One was helping found a nonprofit while she was in high school. Called BOLD Chicago (Building Opportunities for Leadership Development), it taught her a lot about community organizing.

Another was being fired.

“I was a really bad receptionist,” she deadpans. “Retrospectively, I shouldn’t have gotten that job.” But she loved the nonprofit’s programs and spent a lot of time volunteering for them—and “neglecting my receptionist responsibilities.”

The firing devastated Meva’a, who felt it was unjust because she was so dedicated to the nonprofit’s cause. Then one morning she heard former Fox 32 Chicago news anchor Tamron Hall report on an internship program “that offered good paying jobs.”

Meva’a’s boyfriend at the time told her that the program wasn’t right for her. But she didn’t listen, thinking to herself, “I’ll show you.”

And so she was introduced to i.c. stars, a technology-based workforce development and leadership program for low-income adults. Started in 1998 by Sandee Kastrul and Leslie Beller, i.c. stars paves the way to employment for highly talented people who lack career opportunities because of their socioeconomic background.

Sandee Kastrul, at left, co-founded i.c.stars to pave the way to employment for highly talented people who lack career opportunities because of their socioeconomic background. After losing her job as a receptionist, Brandies Meva’a (center) found the program by chance through a story on the morning news—and after a rigorous four-day application process, was one of 12 people accepted from a pool of 5,000.

The full program is two years: a four-month boot camp, followed by a 20-month residency. Getting into the i.c.stars program requires a rigorous four-day application process. The year that Brandies applied, i.c.stars saw a record number of applicants.

Out of 5,000 applicants, Brandies was one of 12 accepted into the program that started in April 2006. “It was a crazy, high, happy experience,” she says.

The Chicago Community Trust has supported i.c.stars through its Unity Fund, which restores stability for people in crisis by helping them become self-sufficient and achieve their full potential.

“The Trust has been a partner of i.c.stars for several years,” says Elizabeth Ferruelo, grants and marketing manager. “The Unity Fund aligns with our work, especially when I think about our case management and counseling support.”

In the i.c.stars program, participants spend two years building technology expertise and leadership skills to take into the workplace and the community. “The vision had always been to teach technology skills while also developing community leaders,” says Kastrul.

Meva’a, 34, grew up in Chicago’s West Garfield Park neighborhood and was always a driven and focused A-student who saw herself as a leader. “Through that experience with starting [BOLD Chicago], I always knew I was going to do something to make a difference in the community that I had come from,” she says.

Her smarts and ambition brought her attention and privileges that she observed others in her community not getting. “I thought if you went to school and got good grades, good things would happen to you.”

Today she realizes that her youthful perspective was a bit naive. She learned that circumstances are more complicated than what they seem. “It was painful at the time, but it helped me grow a much stronger perspective about what truly makes a difference and what truly causes the cycle I saw around me.”

After graduating from high school, Meva’a enrolled at Chicago State University. But a rift with her mother threw her off course before she could transfer to Northern Illinois University and finish a degree. She moved out on her own, getting a telemarketing job to support herself. She was good at it. Promotions came fast—but after three years, she concluded, “I can’t stand this business.”

So she left and took the receptionist job. Had Meva’a not lost that job, she may not have even been watching the morning news when Tamron Hall profiled i.c.stars.— three weeks before her unemployment ran out.

At i.c. stars, Meva’a gained marketable technology skills such as how to program in several computer and scripting languages. The leadership development training, which had drawn her to i.c.stars, helped her reshape her vision for BOLD Chicago.

When Meva’a finished her internship, she was hired as a benefits analyst for a global human resources firm. (“I’m still very good at benefits, by the way,” she says proudly.) Two years into her position, the company got acquired. On the day Brandies packed up her belongings, with her severance check in hand, she hailed a cab and asked the driver to take her home.

When she arrived, Sandee Kastrul came out of her office and said, “Welcome home, B. Happy liberation day.”

The i.c.stars program started Meva’a back to work—and along the path that would eventually lead to founding her own marketing firm, in partnership with another alum. Their goal now is to grow the business, in order to provide jobs for more i.c.stars graduates. “I always knew I was going to do something to make a difference in the community that I had come from,” Meva’a says.

Back in a nurturing environment, Brandies and another alum, Cristhian Romero, started a marketing agency called Source Digital.

“The vision had always been to teach technology skills while also developing community leaders,” says Kastrul. “Brandies is a great example of someone who went through the program, worked in corporate America and then participated in an incubation period at i.c.stars as an alum where she developed a social media business with another alum.”

Meva’a and Romero successfully exited on Aug 27, 2015. “That was a big day,” she says, a smile stretching across her face. “We’re the first social enterprise business that came out of i.c.stars.”

Meva’a remains a big fan of i.c.stars’ mission. “It demands that we add value to the communities that we both work in and serve.”

Her goal now? To create as many jobs as possible. “We want to be the biggest employer for i.c.stars alums.”

Since 2008, Unity Fund has created meaningful impact in the lives of thousands of Chicago residents. Through the generosity of donors, Unity has not only addressed some of the most challenging issues facing our region—hunger, homelessness and community health—but it has empowered the organizations that make our communities strong. Become a part of Unity Fund today.