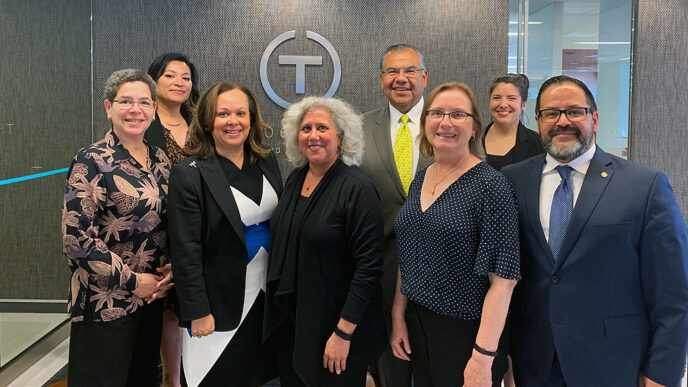 A Guiding Light for Latinx Philanthropy

The steering committee meeting would focus on details of the group’s current grant cycle and upcoming philanthropic opportunities. But there was more than routine business on the agenda: The meeting would mark Cepeda’s final meeting as co-chair, after 16 years of leadership.

Cepeda’s fellow co-chair Doris Salomón took the opportunity to acknowledge her commitment of time, talent and treasure. “We would not be here today with a five million dollar endowment if not for you and Maria Bechily’s fundraising efforts,” Salomón said. “It has been an honor and privilege to serve as co-chair with you.”

Adela Cepeda (center) was a driving force in creating Nuestro Futuro as an identity-focused fund at the Trust. Sixteen years later, Cepeda is ending her tenure as co-chair. “It has been an honor and privilege to serve as co-chair with you,” Doris Salomón (right) told Cepeda at her final meeting. Angel Gutierrez (left) will join Salomón in the joint leadership role.

Nuestro Futuro originated when Cepeda, then a member of The Chicago Community Trust’s Executive Committee, joined with fellow members Maria Bechily, Marty Castro and Virginia Ojeda to advocate for a new philanthropic initiative. In 2003, their efforts resulted in the founding of an identity-focused fund with a mission to support, empower and inspire philanthropy in Latinx communities across the region.

Since then, the fund has infused more than $2.4 million into supporting early childhood education and strengthening nonprofits—and grown to be the largest Latinx endowment of its kind in the country.

That depth of impact would not have been achieved without leaders like Cepeda, who has been instrumental in achieving every milestone.

“The honor is mine. It’s always a privilege because it’s an opportunity to do something good for our community, which is essential to me,” Cepeda told Steering Committee members. “But it isn’t successful if other people don’t take it on.”

Cepeda expressed her appreciation and confidence in the leadership of Salomón and incoming co-chair Angel Gutierrez. Gutierrez, formerly a member of Latino Giving Circle, joined Nuestro Futuro when the two funds merged in 2018 to pool their resources for greater impact.

Staff members from Latino-serving nonprofits celebrate their grants from Nuestro Futuro at a recent reception. The fund has awarded more than $2.4 million in grants since its founding.

Since the merger, Nuestro Futuro has not only expanded member participation, but also added an additional area of focus: immigration. In response to this pressing community need, the 2018 grant cycle invited applications from organizations providing immigration services. Nuestro Futuro received a record number of applications, eventually awarding $166,000 in grants to 20 organizations.

Nuestro Futuro is now accepting applications for its 2019 grant cycle, supporting early childhood education for Latino children from birth through age six and small nonprofits working in the field of immigration. Learn more and begin your application.