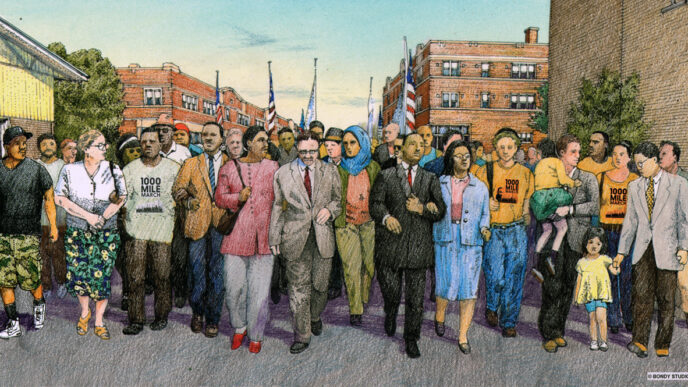 A Global Activist Reflects on Marching with MLK

In 1966, Rozell W. “Prexy” Nesbitt was 22 years old, fresh from a year studying in Tanzania and eager to join the Chicago Freedom Movement.

Nesbitt joined Dr. King to act as security along the historic march to Marquette Park, culminating in a peaceful protest against housing discrimination. Fifty years later, he recalls the day clearly.

“I’ll never forget it as long as I live. I’d never seen any women be as violently, viciously, physically ugly as the group of housewives coming out of their houses. They had stones and they were all spitting at us.”

Nesbitt did not let the hatred they confronted distract him from the sense of purpose that had led him to the movement.

“I’ll never forget Dr. King’s face in all this, because on his face was an expression of disciplined calm. Even though I had never been through non-violence training like some of the other staff, I had full confidence in Dr. King because of the calmness with which he was handling all this.”

Today, Nesbitt—a scholar, activist and educator on race and foreign policy—reflects on the progress we have made since that historic day. “Dr. King called the Chicago 1965-66 freedom summer initiative a step on the thousand-mile journey. I would say that we are at maybe 250 miles. We still have a long, long way to go.”

While he recognizes the continued need for change, Nesbitt is optimistic about the possibility of progress. “One of the things that excites me is the extent to which both black and white youth today—in different ways, but still doing it—are taking that journey.”

With leadership from IMAN and support from the Trust and other funders, the memorial project will feature a recreation on August 6 of a portion of the historic march to Marquette Park. The march kicks off a weekend festival in the park, honoring Dr. King’s legacy by using the power of art, activism and relationship-building to radically re-imagine our city—and our world.

Learn more about why the Trust supports this memorial, and how we support our neighborhoods in the work of changing social norms and structural policies that hold us back from being the First City: Thousand Mile Journey Toward a United Chicago Continues