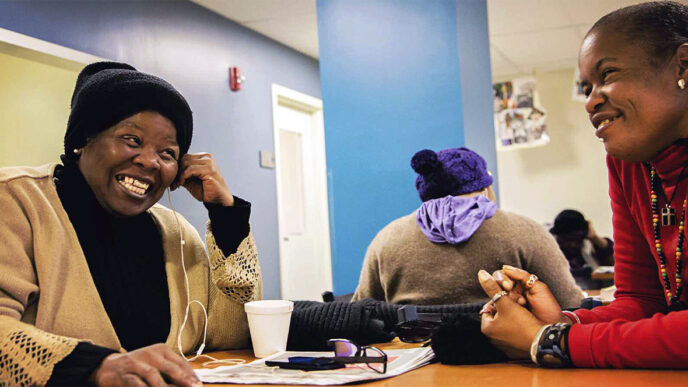 A Generous Gift – Made Smarter – Builds Housing for Homeless Women

On any given night, an estimated 2,000 women unaccompanied by children or families are homeless in Chicago. For forty years, Sarah’s Circle has been providing them with shelter, housing and basic human needs—and now, thanks to a forward-thinking donor, their mission to create safe, stable housing has taken two giant steps forward.

The donor, who manages their charitable giving through a donor advised fund at The Chicago Community Trust, recently made a grant of $14 million to fund the construction of new affordable housing for women who are homeless in Chicago.

That grant leveraged a substantial state tax credit—which was also donated to Sarah’s Circle, providing another $7 million towards affordable housing.

“This was an unbelievable gift,” says Margaret Egan, the executive vice president and general counsel of Hyatt Hotels and Resorts, who serves on of Sarah’s Circle board of directors. “This donor has a lot of interest and confidence in what our organization is doing.”

The tax credit was a benefit of the Illinois Affordable Housing Tax Credit, a provision in the Illinois tax code designed to encourage private investment in affordable housing. Donors who make qualified donations receive a one-time tax credit on their state income tax, equal to 50 percent of the value of the donation.

In this case, because the $14 million grant was awarded through an advised fund at the Trust, the Trust is officially considered the “donor” under the law—and therefore the Trust was the recipient of the tax credit, to the tune of $7 million.

However, a donor has the option to transfer the tax credit forward to the housing project. In accordance with the benefactor’s wishes, the Trust transferred that credit to Sarah’s Circle, where it will be used to develop more housing for women with a history of chronic homelessness.

A generous donor’s gift of $14 million—and the Trust’s fluency in tax law to leverage an additional $7 million—will help Sarah’s Circle open its second housing development for women who are homeless. Designed by Perkins + Will, the building in Chicago’s Uptown neighborhood will provide permanent living space for 38 residents and 50 new beds of interim housing.

“Our first project cost $4.2 million and took eight layers of financing,” says Katherine Ragnar, executive director of Sarah’s Circle. Before this generous gift from the anonymous donor, Ragnar says, the prospect of putting together another patchwork of funding from a number of sources—this time for a project nearly five times as expensive—had been a daunting one.

The Chicago Community Trust staff helped the donor structure the grant from their donor advised fund and complete the complex transaction, freeing the donor from the administrative burden and enabling the nonprofit to stay focused on its labor of love: the apartment building, designed by Perkins + Will, which is scheduled to open in 2020.

The Trust’s senior director of gift planning Tim Bresnahan says, “This is a great way to think about grant making, because it really leverages the amount of the donation” for donors who want to support affordable housing.

“Any qualified donation will generate tax credits. Anybody can do this,” Bresnahan says.

While this donation was a game-changing $14 million, “any qualified donation will generate tax credits. Anybody can do this.”

Sarah’s Circle started in 1979 as a day program for women who are homeless, based in a walkup apartment on Broadway near Montrose Avenue. That first winter, volunteers came face-to-face with the lack of affordable housing options when they found themselves bringing clients home with them who had nowhere else to spend the night.

But while Sarah’s Circle, named for a beloved pet cat at the center, steadily expanded its services, it remained a day program—the city’s only day program for women.

In 2011, the organization opened its first 50-bed shelter. Just two years later, its leadership took the bold step of building an affordable housing development: ten apartments for chronically homeless women with disabling conditions, plus a day center and an administrative headquarters, located at 4838 N. Sheridan.

This second residential building will occupy a corner lot at 1005 West Leland, providing permanent living space for 38 residents. It will also offer 50 new beds of interim housing, whose occupants can access food, clothing and wraparound services. A third building is on the drawing board.

“You can’t end homelessness without providing a place for the homeless to go,” Egan says. “And secure housing brings other things, like job security. If you have a place to stay, you can stay clean and get to work on time.”

But despite the persistent need, the government hasn’t built new affordable housing for decades, Ragnar notes. “Donors feel to an extent like they are plugging the dyke, making change with their dollars because the current system is not providing enough,” she says.

And as Egan has learned, “One donation can change everything.”