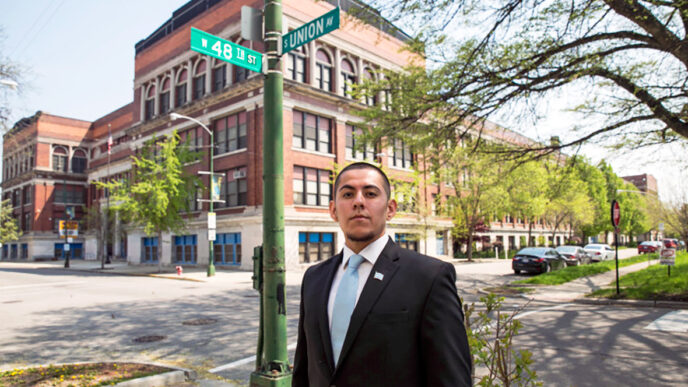 Aguayo sounds confident, certain. Happiness and hope resound in his voice; possibility and promise pulsate through his words. At age 21 he’s clear about his way forward, and wiser because of where he’s been.

Aguayo grew up in Chicago’s Back of the Yards neighborhood, raised by a single mom who worked 13-hour shifts in a beauty salon. It can be an easy place to get into trouble when you’re a kid “without much to do.” Aguayo wished he could have played soccer, but his mother couldn’t afford the fees.

The Aguayo family lived in small apartments, moving often. Aguayo’s dad drank a lot and was abusive. Young Aguayo saw his mom cry a lot. He worked hard to maintain good grades and participate in spelling bees—“because that made her happy.”

His parents, Mexican immigrants who came to Chicago as teenagers, divorced when Aguayo was 10. He remembers feeling relief at his father’s absence. But in the struggle to take care of three kids, his mother left them alone for long hours after school.

Eventually, gang members filled the void for a boy searching for identity and something to do.

And for four years that was his life. “I went through a lot of things. I was involved in lots of life or death circumstances,” Aguayo recalls.

He remembers losing a friend and fellow gang member at age 13. Seeing him in the casket, Aguayo believed that his friend had died for a noble cause. “Now that I’m older, I think differently,” Aguayo says. “But then, that’s how I saw the world.”

One day after a shootout in front of his house, his mother gave the police permission to search their home. Through tears, she told her son, “People used to say you weren’t going to amount to anything. And I used to defend you and tell them you were just going through a phase. But you know what? You’re proving those people right.”

Her words hit home. He began to do better in school. But his ties to the gang remained strong.

He remembers losing a friend at age 13. Seeing him in his casket, Aguayo believed that his friend had died for a noble cause. “Now that I’m older, I think differently. But then, that’s how I saw the world.”

One day during an in-school suspension, the principal handed Aguayo an application for a paid summer job, and offered to write a recommendation It was through the Mikva Challenge, an organization that exposes Chicago teenagers to the political process. Aguayo was 17.

Miraculously, he says, he got the job. He began working in a North Side alderman’s office during the day, and breaking the law with his gang at night.

But the experience captivated him. “I realized I could help out the community, which I loved, back on the South Side,” Aguayo says. “I learned my potential. I fell in love with the concept of civics.”

When the new school year started, the principal asked him to give a speech. Afterward, a freshman named Lupe told Aguayo, “Bro, I want to be like you.” That’s when it all came together, and Aguayo knew he had to leave the gang.

The parting of ways was painful. Aguayo endured a bruising beating from gang members. When it was over, barely able to walk, he made it home, where his mom cried and hugged him. “I knew that chapter in my life was done.”

Aguayo had his senior year ahead at Hector Garcia High School. Making up for lost time, he focused intensely on schoolwork, taking his grade point average from 1.5 to 3.0. He got accepted to Dominican University and established a mentoring program “for kids like Lupe to get off the streets.” The program had 40 students on the first day.

“It was the first time I realized I had the ability to influence others,” Aguayo says.

Aguayo got the job. He began working in a North side alderman’s office during the day—and breaking the law with his gang at night.

In his first year at Dominican, Aguayo joined the Chicago Mayor’s Youth Commission, where he would serve for three years. He worked to create a transportation program to help low-income students, and negotiated grants for community peace projects.

In 2015, he coordinated a Hoops in the Hood program in Back of the Yards. Later that year, Mayor Rahm Emanuel appointed Aguayo to the Brothers’ Keeper program, a White House Initiative to address opportunity gaps faced by boys and young men of color.

Aguayo, who financed his college education with financial aid and a combination of scholarships, became the youngest student body president ever. After graduating with a 3.94 GPA, his eyes on law school, he’s headed to the Aspen Ideas Festival in Colorado. He also will spend three weeks in Cuba studying politics, history and culture.

“I shouldn’t be the exception,” Aguayo says. “Someone believed in me, gave me an opportunity. That’s what I hope to do.” Or, in the words of his Twitter profile: “South Side Young Latino trying to make the hood a better place.”