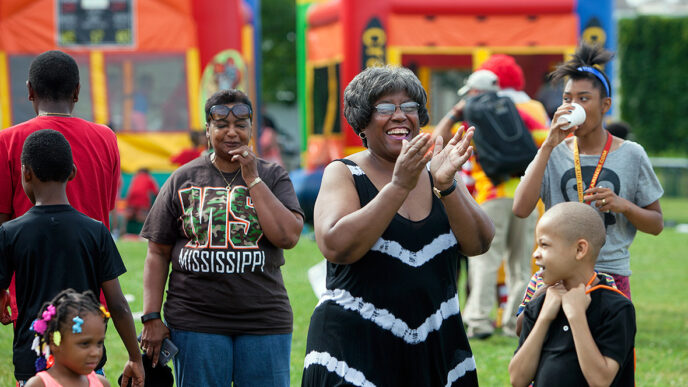 After living for 40 years in South Shore/South Chicago—two adjacent lakefront neighborhoods that have gone from middle-class haven to gang stronghold—Laura Morgan didn’t have much to do with her neighbors. That all changed one day in 2008, when the woman from the house across the street rang the doorbell. She asked if Morgan could watch her house for intruders while she went to the funeral of her 23-year-old son, who had been shot dead on their street.

Morgan’s own son, also 23 at the time, was upstairs in his room. He had been educated outside the neighborhood, the family slipping quietly in and out of their house for years through their attached garage.

[pullquote]“We can all just leave-or we can stay + fight to make our neighborhood vibrant”: South Shore activist Laura Morgan[/pullquote]

Watching her neighbor’s house—a home she now realized she had never been inside before—in a part of Chicago that has seen so many shootings in recent years it has earned the name “Terror Town,” Morgan thought, “What if that had been me? What if I had to go to the morgue to identify my boy?”

Morgan, who grew up in a small town in Louisiana where she “knew everybody,” asked herself how she had become so isolated in Chicago. She resolved that day to become “more neighborly, more loving,” and that led her into an ambitious, ongoing effort to address the problems of a troubled community, one block at a time.

A nutritionist with an advanced degree in public health, a retired home economics professor and administrator who served in the community college system for 25 years, Morgan decided to start a block club. She walked from house to house as part of a group to invite neighbors to the first meeting, winding up with a few dozen people, along with the alderman and representatives of the Chicago Alternative Policing Strategy (CAPS) program, talking about how they could work together to break the cycle of violence in the area.

“Volunteerism has been part of my life all my life. When I was growing up, church was the center of our lives. There was always some activity,” she says. “We didn’t have that here, but now we do. I know my neighbors now.”

Morgan soon formed a coalition of block clubs in her area. She joined the Rainbow Beach Advisory Council and became its president. She also got involved as a host with On the Table, an initiative of The Chicago Community Trust that brings people together to talk about how to strengthen their communities. Many of the people involved in these organizations were senior citizens, and Morgan found herself addressing their problems as well. Morgan presently is most active in the South Shore Community Action Council, she says.

Laura Morgan talks with police officers at Rainbow Beach during National Night Out, an annual event promoting safety in the streets. Morgan was inspired by the death of a neighbor’s son to build closer links among local residents for safety and solidarity.

In her travels, she learned about Social and Emotional Learning (SEL), an approach to education that recognizes that children need to be in control of themselves if they are to have any hope of navigating the complex modern world. The Illinois State Board of Education has adopted SEL standards, but acceptance has lagged in individual school systems, Morgan says.

“SEL can lead to a reduction in violence, drugs, bullying. I was just enthralled with that. I thought, ‘This is what we need,’” Morgan says.

In 2012, she began lobbying Chicago Public Schools to initiate SEL training for teachers and other staff people—an ongoing project that can be frustrating, she says, given the obstacles a bureaucracy like the CPS can present. Morgan is undaunted, though.

“In a high-crime area like my neighborhood, you need to have SEL. The easiest way to reach these young people is through the schools. You need the language of self-esteem, of organization—how to maintain one’s own self-respect,” she says.

Given the serious problems in communities like South Shore and South Chicago, Morgan says, “we can all just leave. Or we can stay and fight to make our neighborhood a vibrant place to raise our children, which is what I’m doing.”